So a whole bunch of you who are even moderately familiar with San Francisco via first-hand experience or because you grew up watching Full House are currently thinking, Bikes? In San Francisco? Are you crazy? No, I’m not crazy, because I’ve found the secret to successfully enjoying a spin around this exceedingly hilly destination without killing yourself: electric bikes. I mean, I’m in good shape, but even I’m not gonna take on those hills without some battery-powered propulsion. We visited the city as part of our epic one-month road trip down the West Coast and thought we’d take this opportunity to share with you a few recommendations for a self-guided bike tour of San Francisco. Obviously, not any bike will do for a self-guided bike tour of San Francisco. Unless your thighs are made of actual steel. Ours are not, so we got an electric bike. There are plenty of places in the city that offer rentals, but we’re pretty sure you can’t beat the deal at Sports Basement AKA Basically Free Bike Rentals. Here’s how it works: You rent whatever bike you want from the Basically Free Bike Rental Location (1196 Columbus Street), then do your thing. When you bring it back, you’ll get a credit for the total cost of your rental to spend at that same Sports Basement location! What does Sports Basement carry? Uh, everything adventurous! It’s like a toy store for outdoor enthusiasts! And the prices are way more reasonable than at REI or some such. So basically, it’s like getting a bunch of free outdoor gear or clothing with your bike rental! Seriously, does it get any better than that?

The catch: you can only get this deal from the Basically Free Bike Rental location. But it’s close to Fisherman’s Wharf and has free parking if you’re driving your own vehicle. Book your rental online and save 20%.

Not gonna lie, there’s not a lot here for vegans (or people who don’t care for kitschy souvenirs), but that doesn’t mean you shouldn’t ride by and take a look. and while you’re there, stop by the famous Boudin Bakery for a loaf of sourdough (it’s vegan). 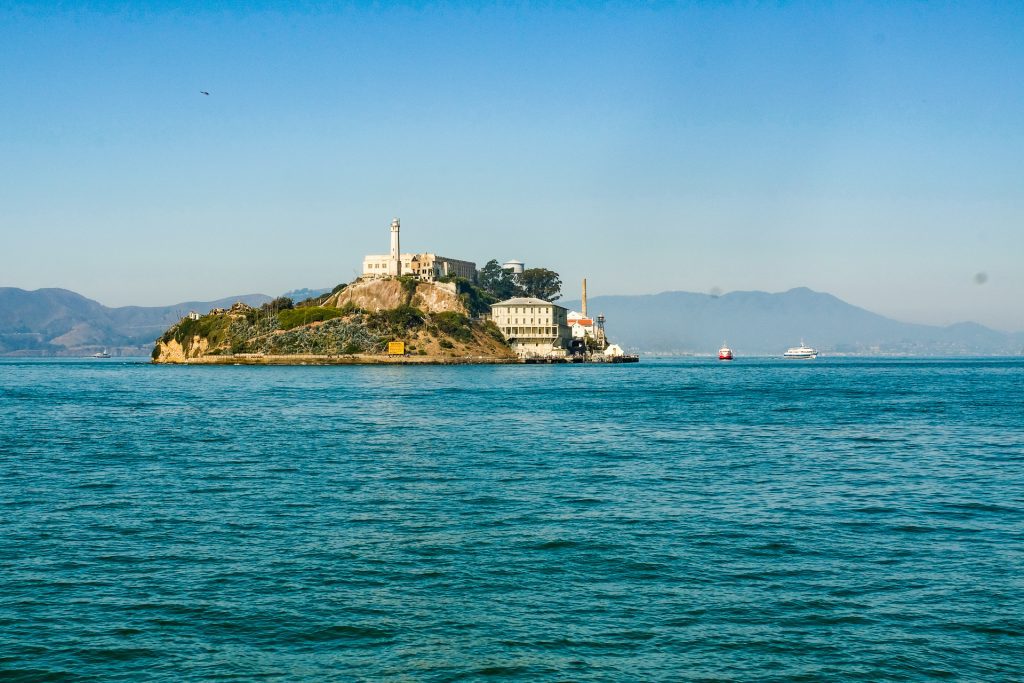 OK, so there’s one more stop to schedule while at Fisherman’s Wharf: Alcatraz Cruises. You’re definitely going to want to book the passage to Alcatraz in advance (weeks if not months in the high season or on weekends), but don’t miss the chance to get out there. Tickets are $38 for the ferry and include access to the island where you can wander as long as you want and take a free audio tour of the prison. I can’t say I’m big on history, but when it involves criminals and murderous escape attempts I’m all ears. Spend a few hours and hop on the ferry back! 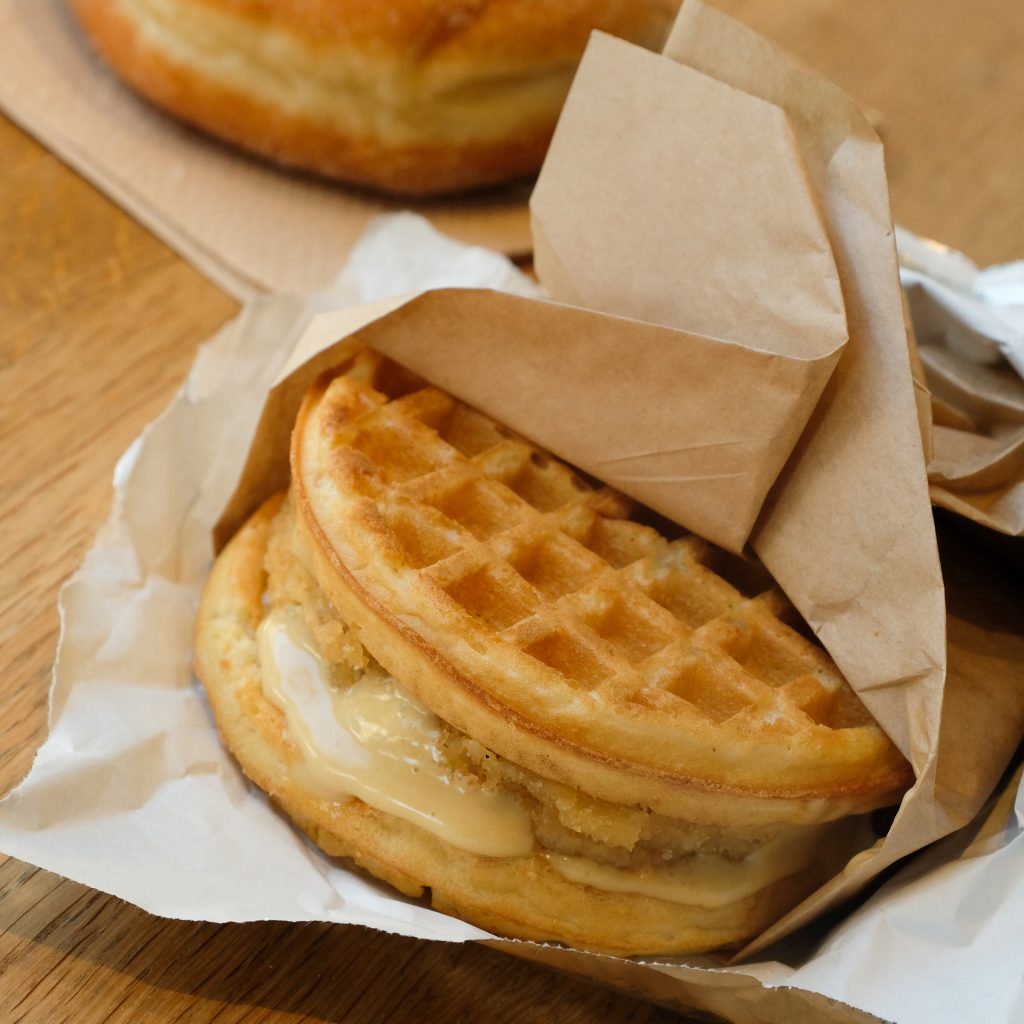 Chick’n and waffles at Vegan Picnic

Next, ride up to Vegan Picnic on your self-guided bike tour of San Francisco. There are a good number of vegan options in the city, but this is a fun one. VP had a chick’n and waffle sandwich, and we like quirky food. Also, donuts!

Need a sweet treat after lunch? Head to Holy Gelato that has a whole case of vegan gelato (and cones) next to conventional flavors. Because who doesn’t love gelato? A sunny day at the park

Take yourself on a ride through Golden Gate Park. It’s a lovely, stretched out park perfect for a leisurely cruise or afternoon picnic. There are even spots where you might not find another tourist!

Take a quick detour on your self-guided bike tour of San Francisco to this little vegan grocery store. We stocked up on TVP for the road and delicious vegan jerky we have only ever seen on the West Coast (Su Mama’s). Not gonna lie: even with an electric bike, this ride is still gonna be a hilly haul. But do it anyway. It offers some lovely park area and nice views of the Golden Gate Bridge. 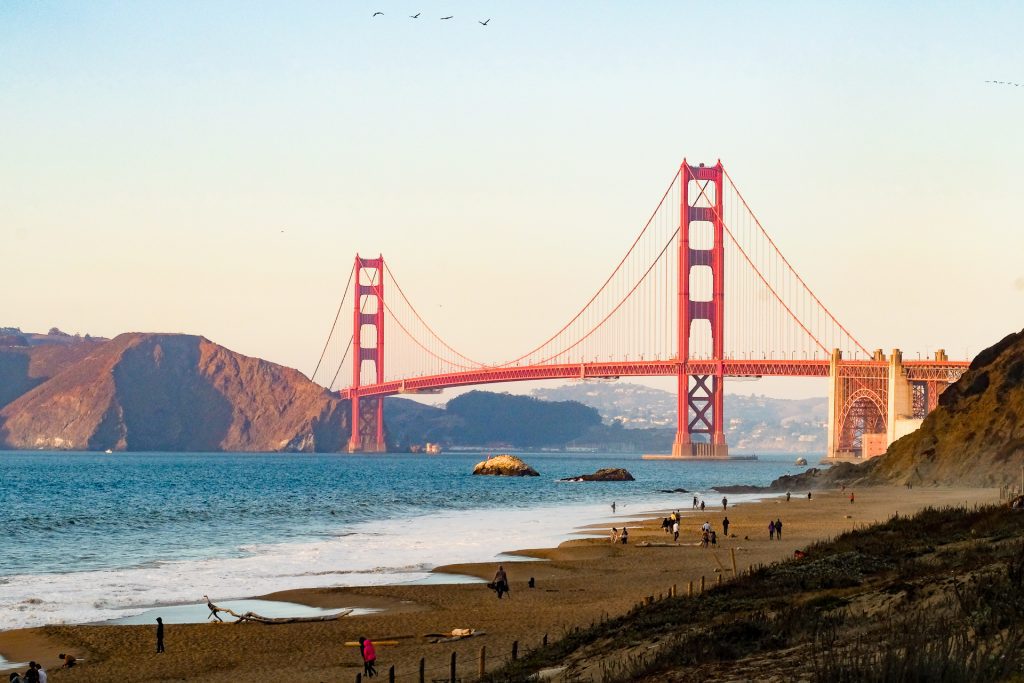 If time allows, go ahead and ride across the Golden Gate Bridge. There’s a separate bike lane to keep you safe from those pesky cars. 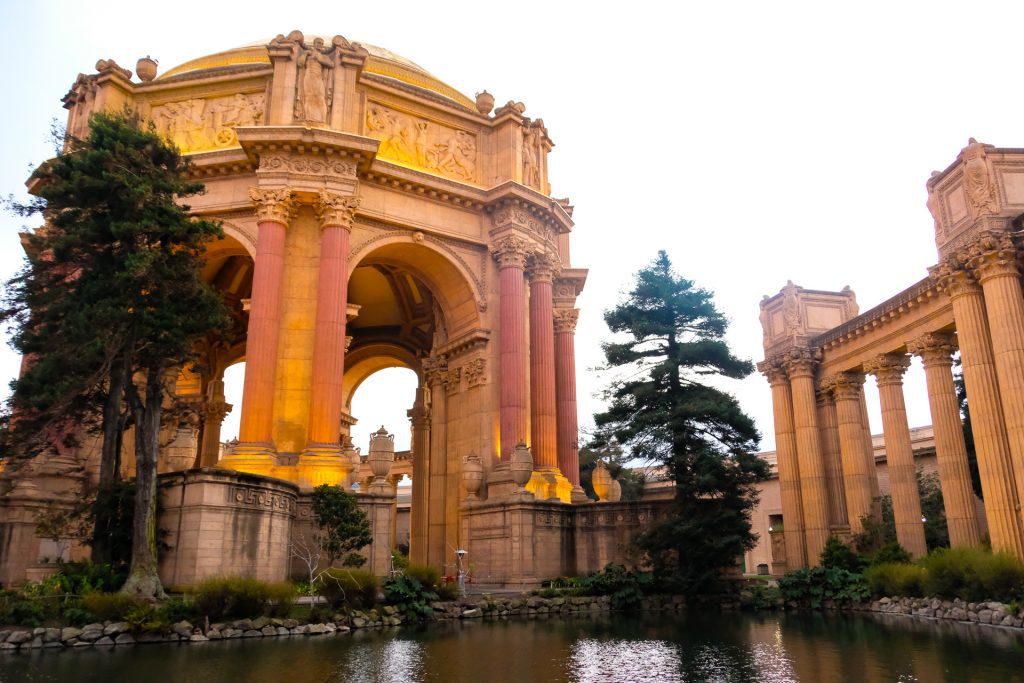 Do yourself the favor of at least riding through (or rather riding to and walking through since they don’t permit bikes) the area. It’s lovely, especially at twilight when everything gets lit up.

Uh, an all-vegan sushi menu? Yes, please! Need we say more? Perfect for an afternoon snack or go crazy and make it dinner. 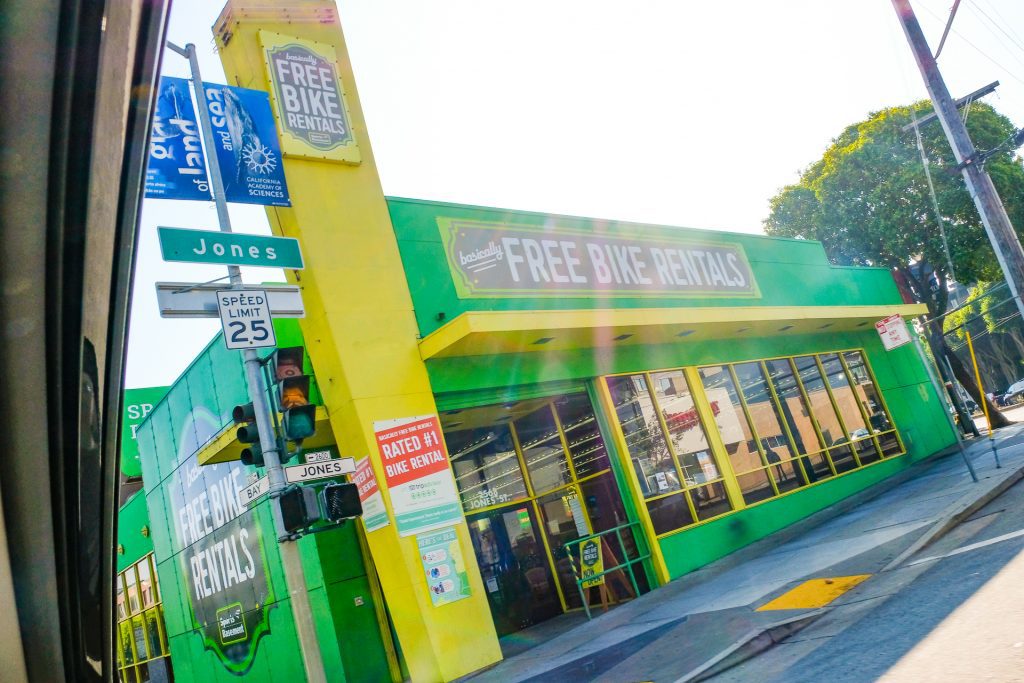 End your ride where you began, then browse the aisles of outdoor and adventure clothing and gear. After all, you’ve got that whole credit from your bike rental to spend!

Did we miss any amazing hotspots in San Francisco? Share ’em below so we can make sure to hit ’em up next time. Wander on!