There’s no better way to explore a new city than by bike. Walking is great, but it takes time to get anywhere. Buses are cheap but you just end up whizzing past everything. But bikes. Bikes offer the best of both worlds: you can cover some serious ground in not much time while still immersing yourself in all the quirky eccentricities (I mean character…) a place has to offer. Plus you get some exercise, which, let’s be honest, rarely happens when traveling. So take a self-guided bike tour of Denver is just what we did.

We picked up bikes from SloHi’s City Park Location (they also have a Highlands location and a coffee shop) and hit the town. Here are the sites we visited and think you should check out, too: 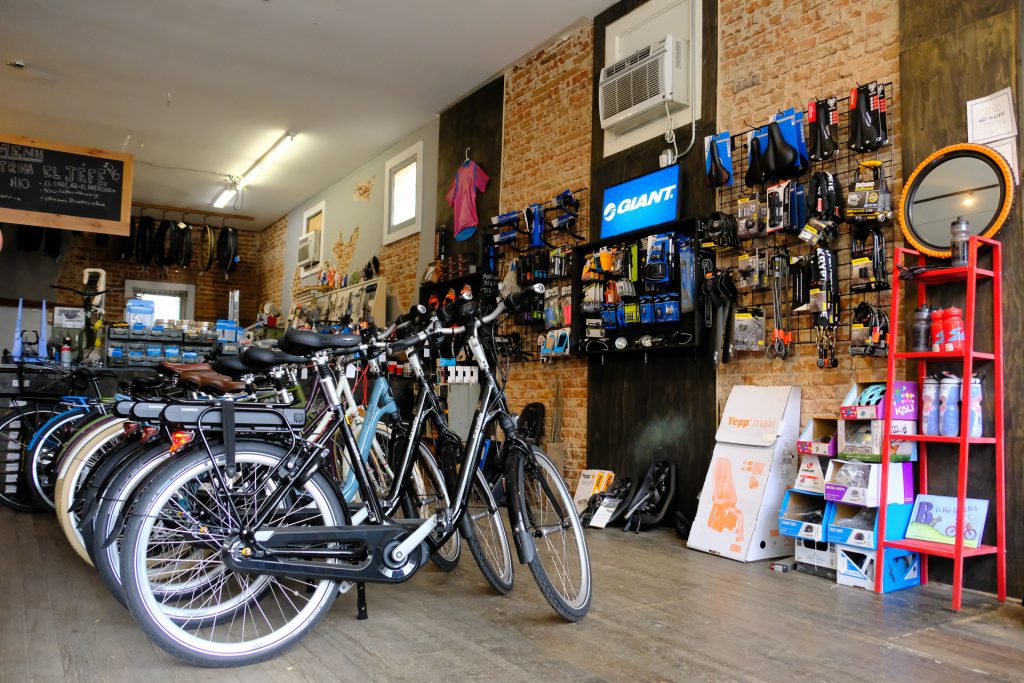 SloHi Bike Rental: City bikes, electric bikes, mountain bikes, whatever you want to ride, they can rent it to you. All-day rentals start at $35 and if you brought your own, they offer tune-ups, too. And if you want more recommendations than we offer here, these guys will be more than happy to offer some direction. 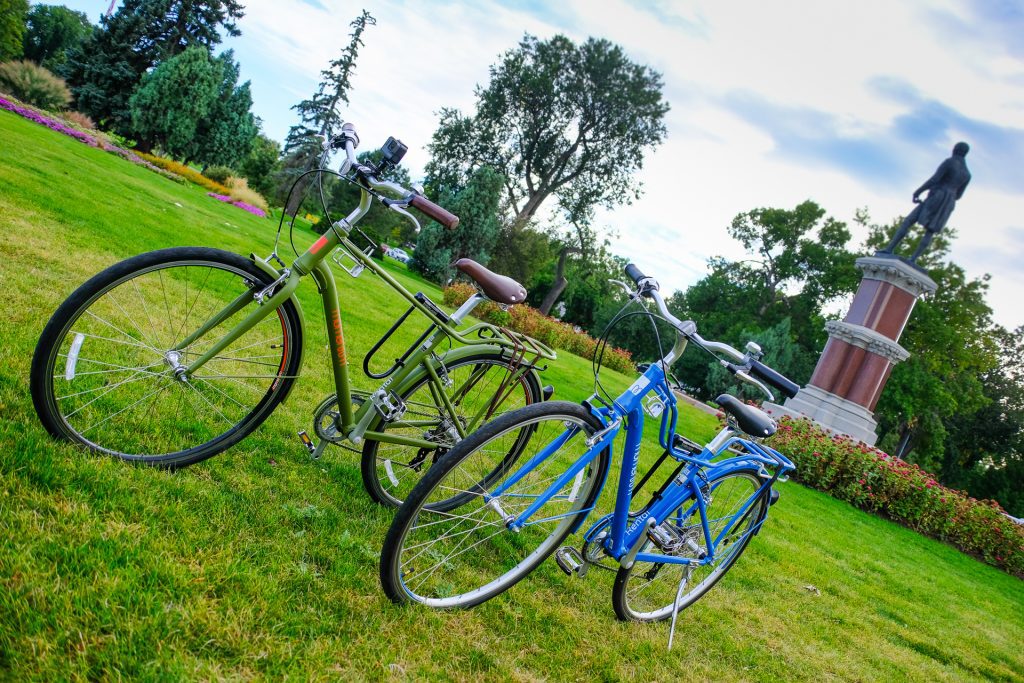 City Park: This popular public park includes ponds, a zoo, the Denver Museum of Nature and Science, even a golf course. Ride around and have a wander or stay for a while and enjoy a sunny day. 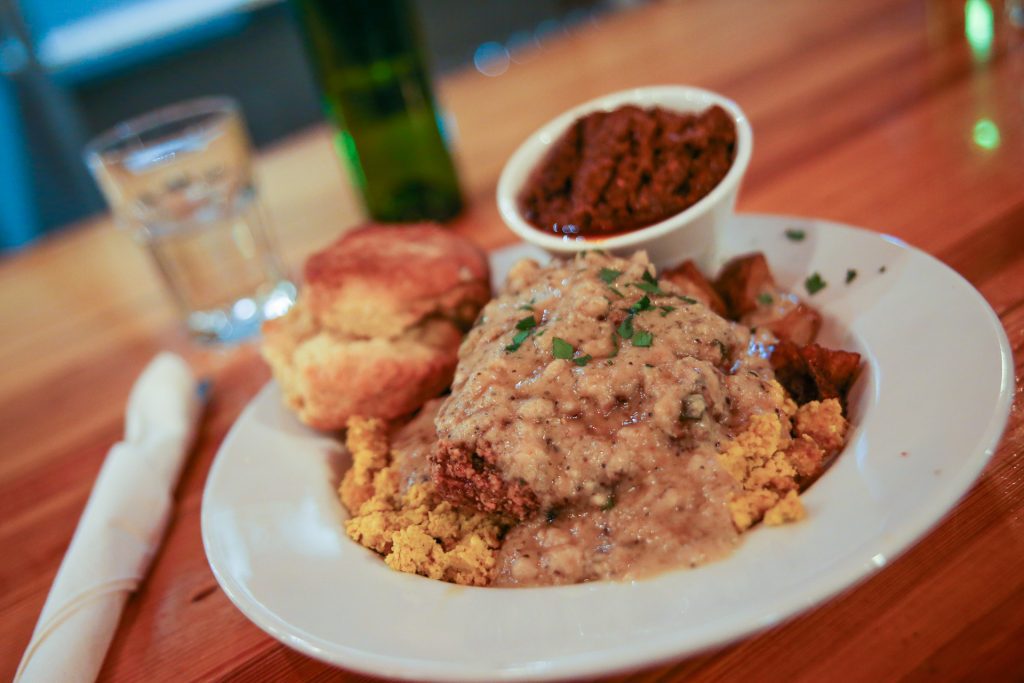 The Big Rig breakfast is served all day at Watercourse Foods in Denver.

Watercourse Foods: To stuff yourself with vegan cuisine that is by no means healthy in any way (i.e. comfort food), this is your spot. Heaping plates of crowd-pleasing faves like chicken fried seitan with biscuits and gravy and mac n cheese are magic. Come hungry. 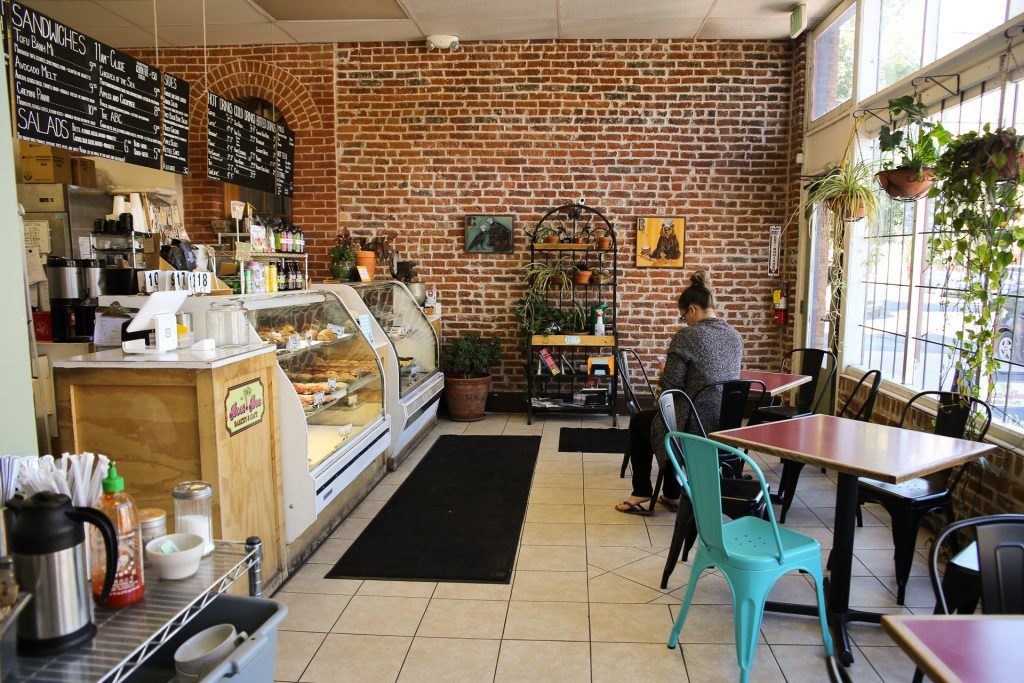 Beet Box: This vegan coffee shop and bakery has simple brekky pastries to get your ride off to a good start. Think little mini vegan quiches, croissants and donuts. Donuts! Not hungry after Watercourse? Then settle for a coffee refuel and take a pastry for the road. 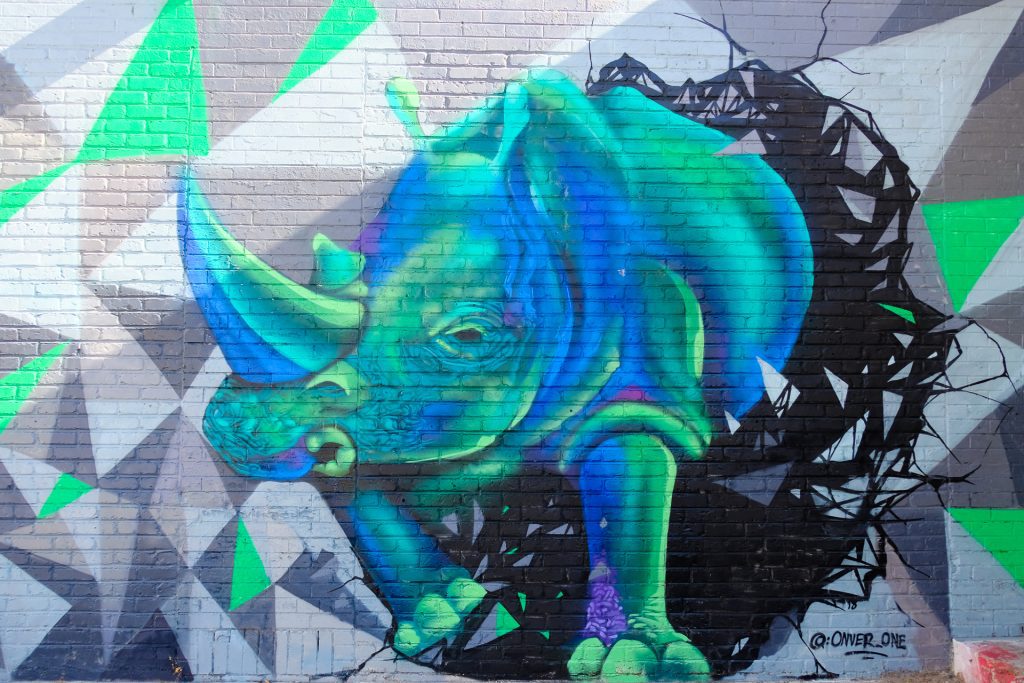 A rhino for RiNo. Appropriate, no?

RiNo Arts District: The River North neighboorhood has street art galore. Also, galleries and coffee shops and stuff. But we were having such a blast on two wheels that we didn’t want to dismount. Maybe the best part: the little man painted in the bike lane is actually a rhino.

REI: Love it or hate it, this outdoor lover’s Mecca is the flagship store and it’s huge. At least go take a look inside, even if you have no intention of buying anything. (BTW, there’s a locally-owned store with used gear down the street called Wilderness Exchange for good deals on outdoor gear.) 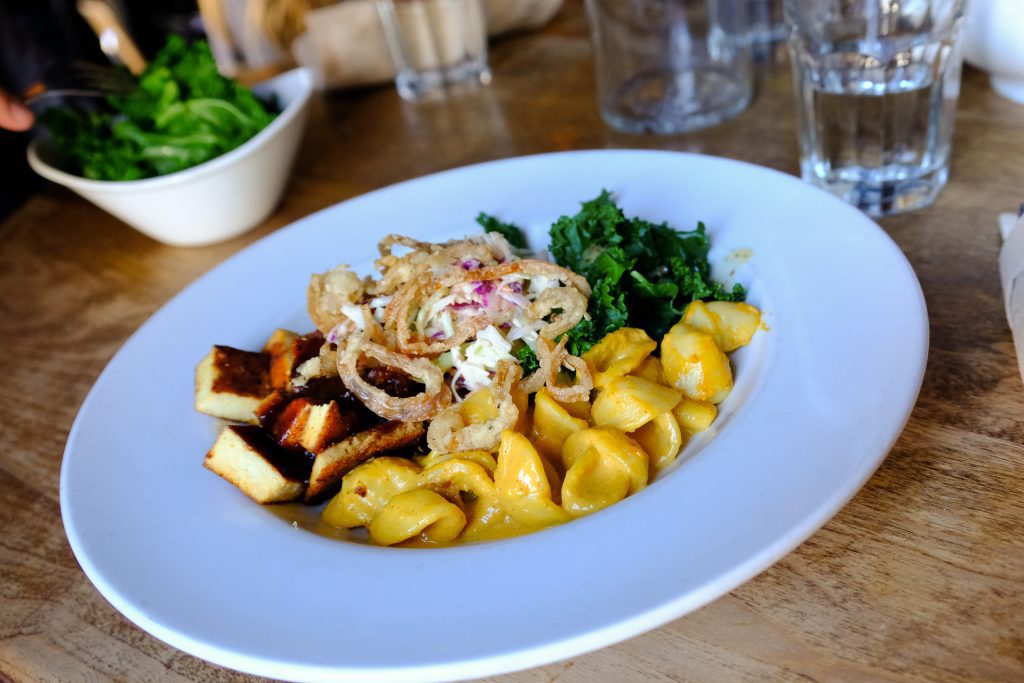 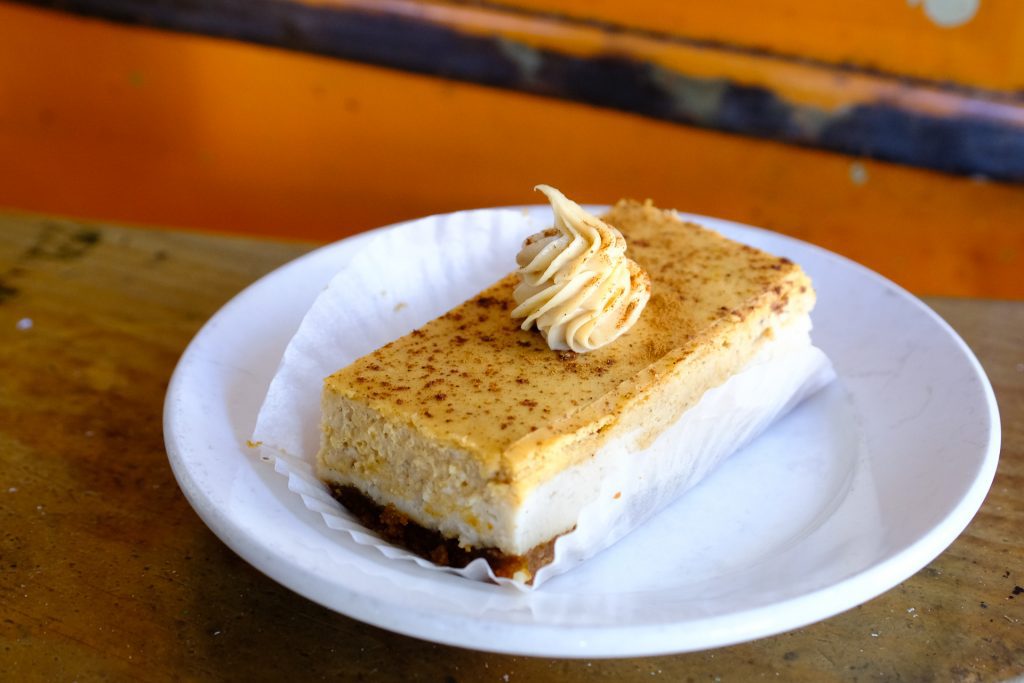 Capitol Building: Take a look, snap a few pics, and check out the Civic Center Park if you’re feelin’ it. 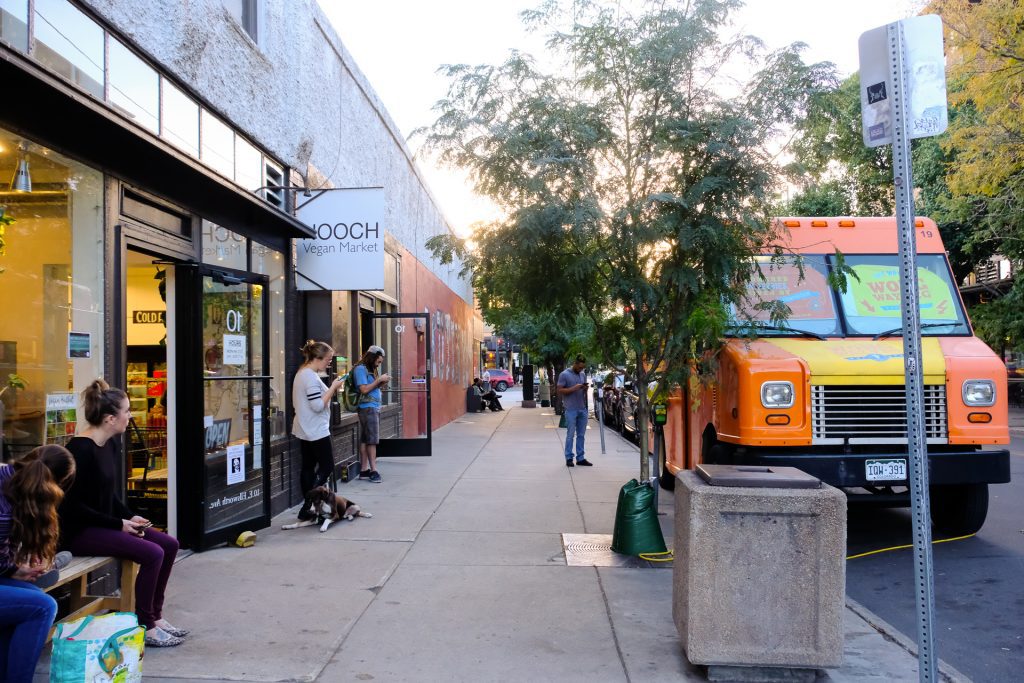 Nooch Vegan Market: Is there a better name for a vegan grocery? This surprisingly spacious and well-stocked store has all the vegan staples, plus vegan jerky, personal items, locally made goods, you name it. Plus there’s often a vegan food truck parked out front at dinnertime.

Cheesman Park: A pavillion, bike paths, green space, the Denver Botanical Gardens, it’s all here. The gardens, however? Not free. Just wanted you to know.

Want a map of the route? You got it. Want a video of our sunny self-guided bike tour of Denver? Got that too. Just the top five vegan spots in Denver? You betcha. Did we miss any amazing spots in the city? Share ’em! Wander on!