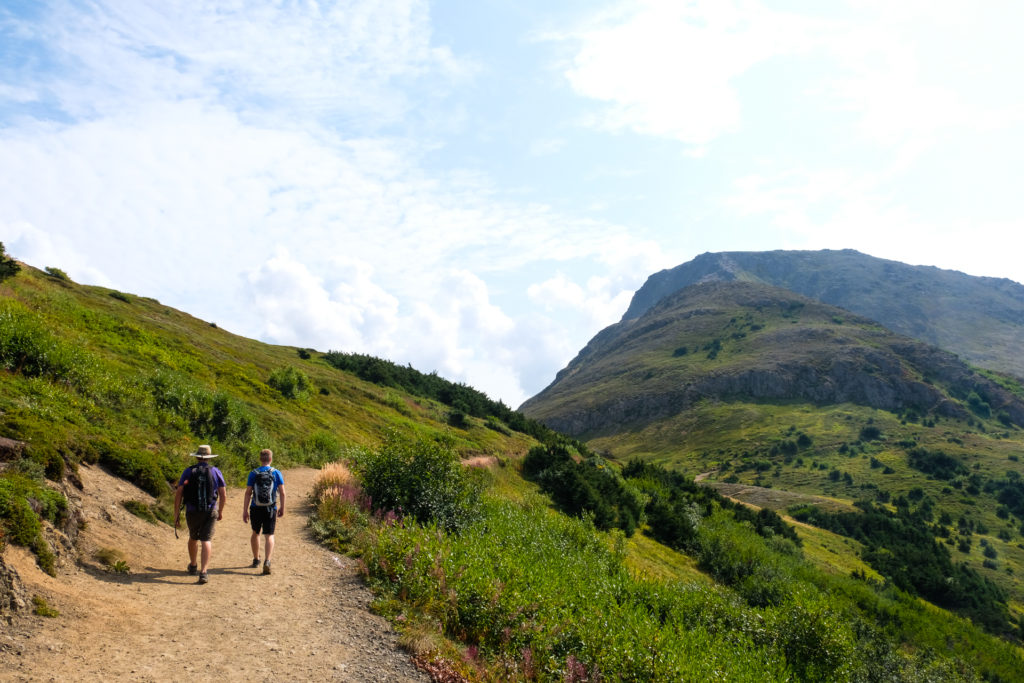 The beginning of week three of our Alaska road trip (read about week one and week two) finally saw us in Alaska! We were thrilled to have reached our destination (though the journey had been just as phenomenal) and to be meeting up with friends in Anchorage. There would be so much to explore, from the city, to Chugach State Park to the east, to Denali National Park to the north.

Our first night in the state we freedom camped on a lake not too far from the Alaska-Canada border. We started our very damp fire with tortilla chips, kept it going after a few minutes’ rain (cause we’re pros), and were in Anchorage the next day where we crashed in our friend’s brother’s garage. And would you believe it if we said an inflatable mattress in a garage isn’t the strangest place we’ve slept? If you’ve been following us for any length of time, I assume you do. Our friends (with the brother) flew in late that night so all we got to do was hug them, say goodnight, and tell them we’d see ‘em in the morning! 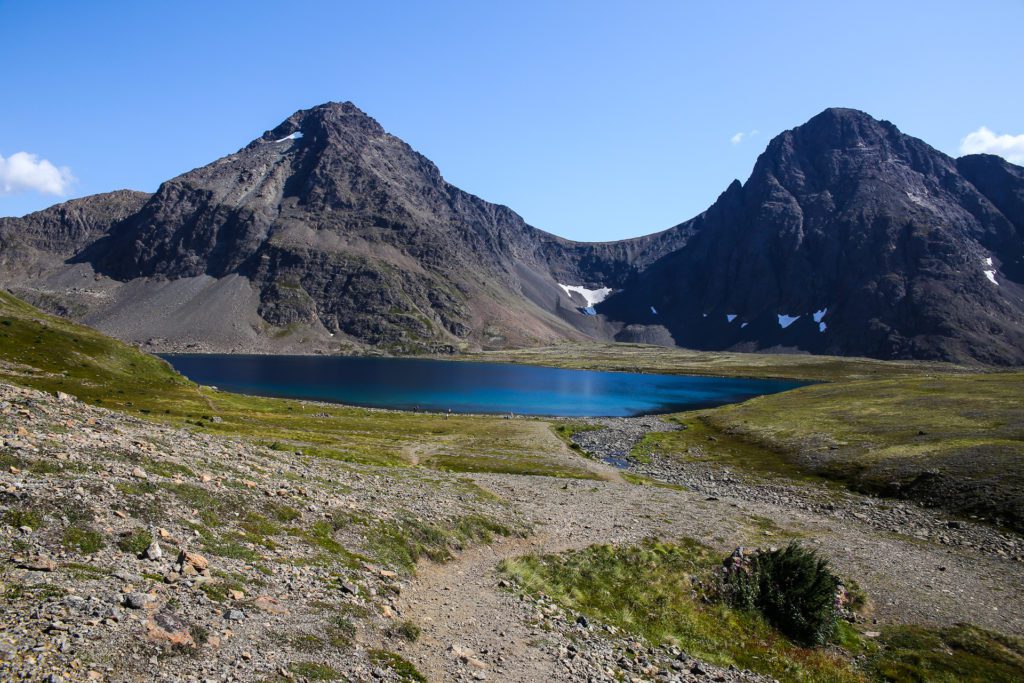 But over the next days we chatted, we laughed, we caught up, then we went to meet some super fun folks from Visit Anchorage and dined on vegan sandwiches at Middleway Cafe before they took us on a much longer hike than expected! Which was fine with us. It had been too long since Banff. They brought us to Rabbit Lake trail in Chugach State Park and we embarked upon an 8-mile, four-hour hike that terminated at a lake: a worthwhile payoff. Plus, the company was stellar, the conversation stimulating, and there were plenty of opportunities to stop and pick blueberries (and get introduced to crowberries and bunchberries by our savvy Alaska Native guide). Which we took full advantage of.

You had to practically tear me away from those berries. And we put that newfound berry-picking knowledge to good use on just about every other hike we went on in the state. Because blueberries. Wild ones.

The next day, it was another hike: Flattop Trail this time, also in Chugach, also with blueberries and crowberries. And we had another friend—one from high school who happens to be in the Air Force and happened to be stationed in Anchorage, in fact—to accompany us on that trek as we reminisced about how awful high school was and quoted way to many lines from the Lord of the Rings Trilogy. Don’t ask. I don’t know.

The Flattop Mountain hike was certainly a more challenging one, and one with varied and changing landscapes as you wind up the mountain and then scramble to the summit. Leave the sneakers and adventure sandals at home for this one; you’re gonna need hiking shoes (sorry, Chacos). But check out that view: 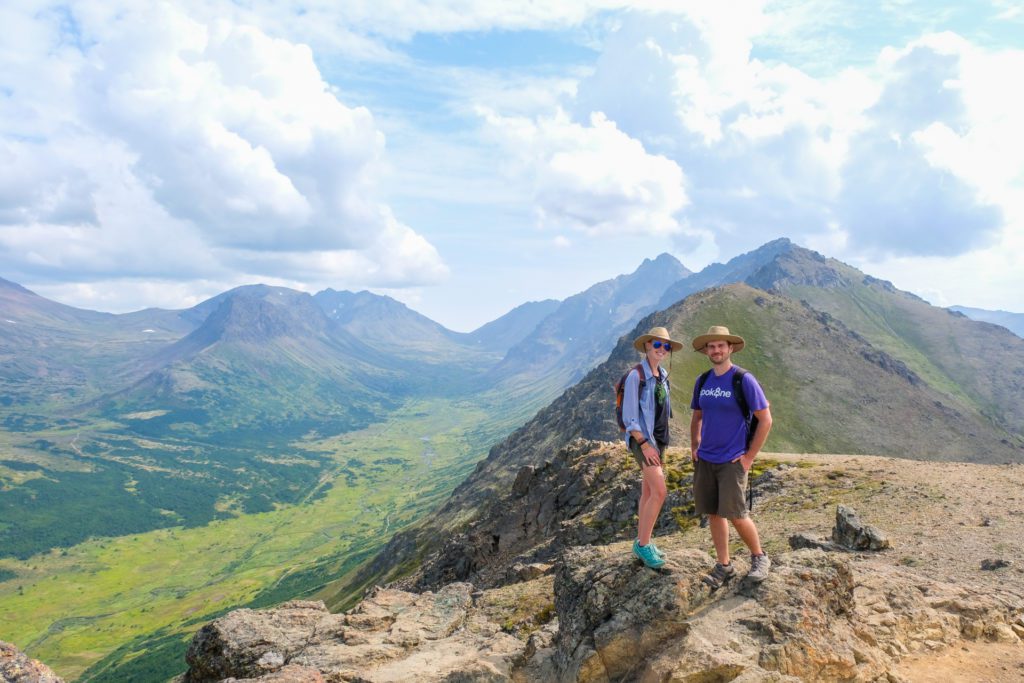 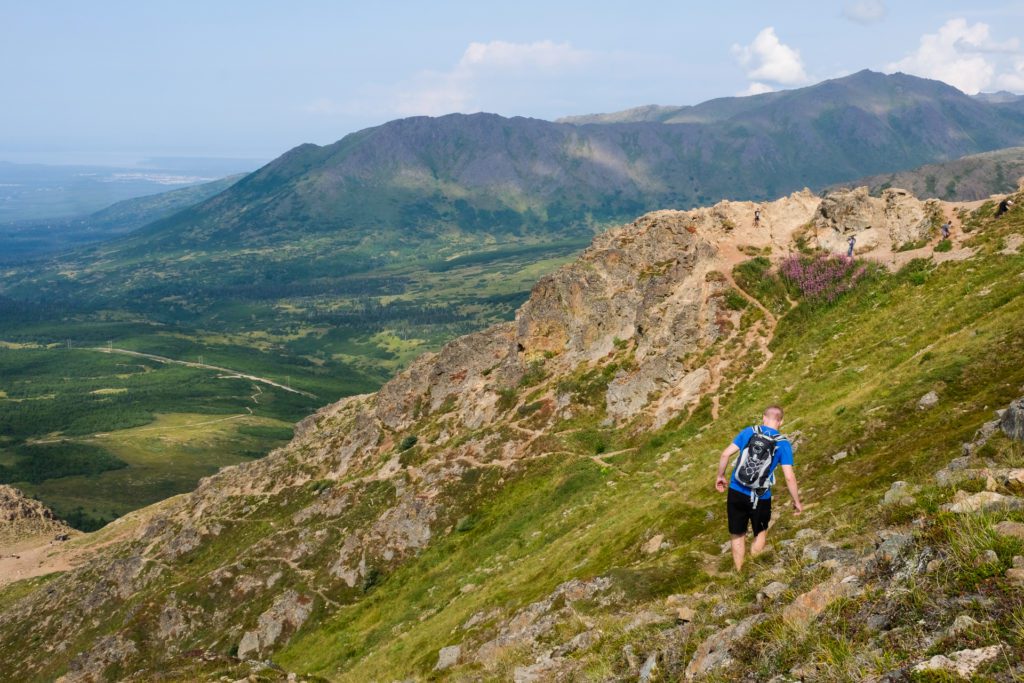 We dined on vegan pizza at Moose’s Tooth and Hearth, savored vegan ice cream at Wild Scoops, and couldn’t help from going back to Middleway Cafe several times, if only just for vegan baked goods (you know we have a weakness for cupcakes). We explored the impressive Anchorage Museum and ate vegan sausages from one of the many hot dog carts lining the sidewalks downtown (Anchor Dogs is one that offers vegan options).

Then, it was Denali time! But that’s a whole other post (which you can read—and should—here). Followed by a few days in Fairbanks (because we’re weird and broke up our trip to match our friends’ itinerary—after all, what another couple hundred miles round-trip when we’ve driven 5,000 already?).

When we returned to Anchorage, we couldn’t find a couch surfing host, so we booked a campsite. I know! WE booked an actual campsite! And paid money for it! Crazy, huh? (If you know us at all you know we’re freedom campers/boondockers all the way.) But you know what? It was nice to have a home base for three nights, not have to pack up the tent every morning, and have access to a bathroom and a shower (which is the last time we showered for at least a week). There weren’t any free campsites anywhere near the city anyway.

In this three days, we caught up on work, did laundry (I know, super exciting), and went on one epic adventure. Namely, a pale and pedal on Eklutna Lake with Lifetime Adventures. What is a paddle and pedal, you ask? I’ll tell you: It’s when you kayak 8ish miles down the length of Eklutna Lake, then have mountain bikes waiting for you so you can pedal your way back. Get it now? 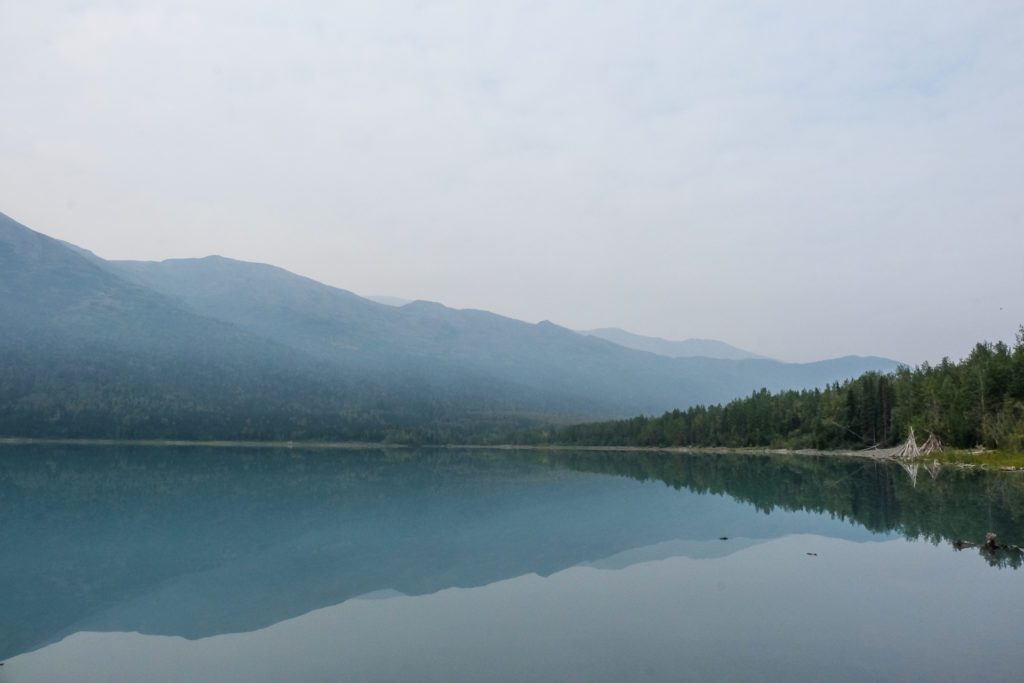 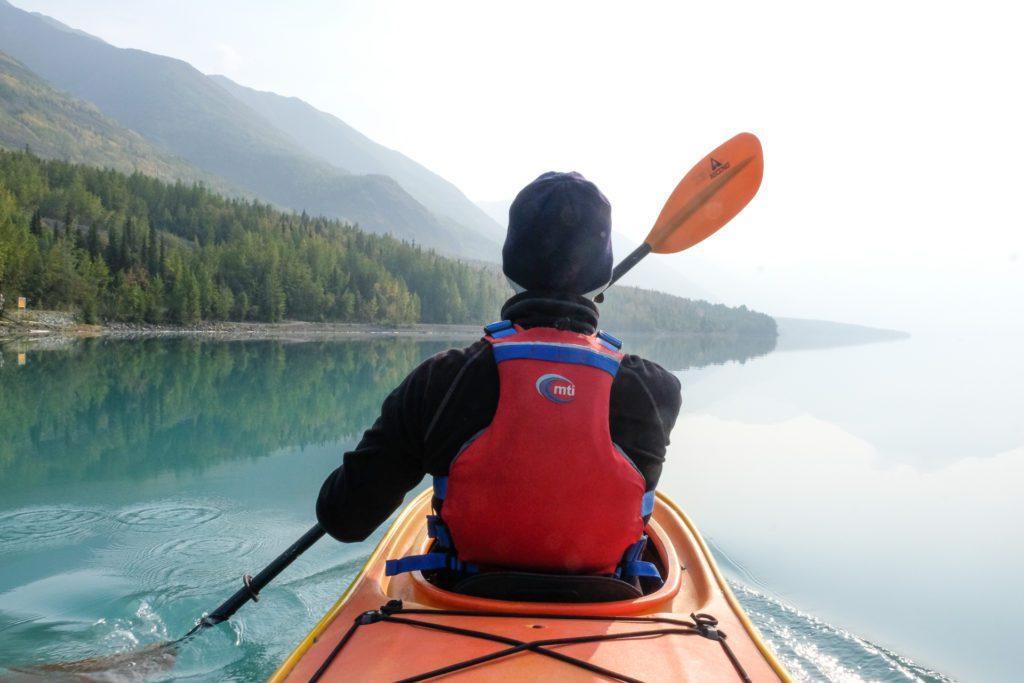 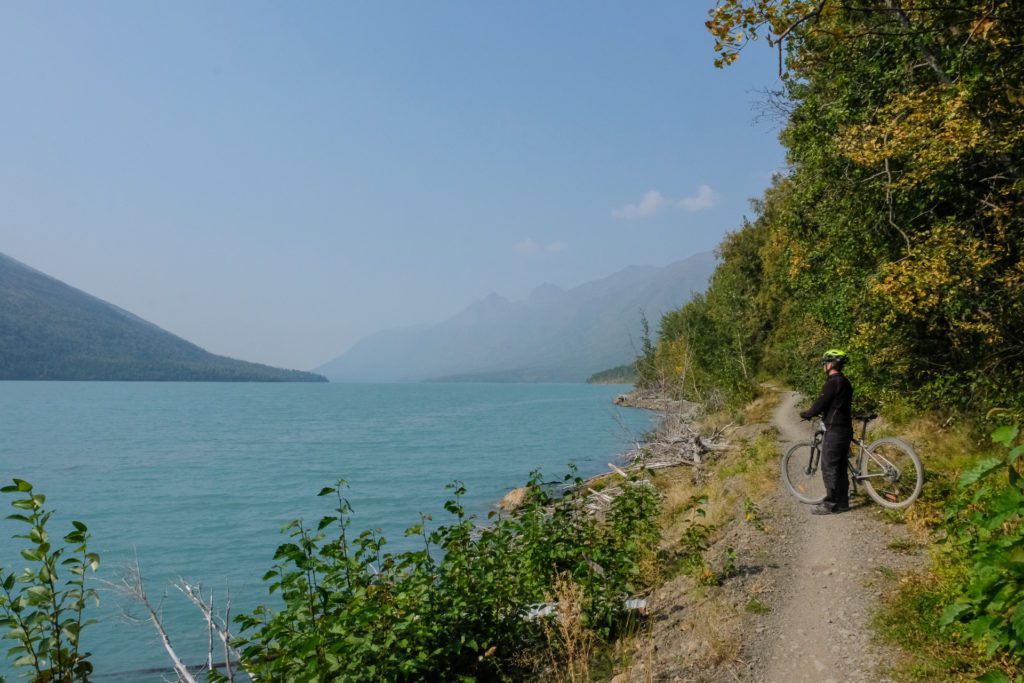 It was quite the adventure. Despite the residual smoky haze from wildfires that obscured what would have almost certainly been an exceptional view, the landscape was stunning! The water was perfectly calm, the mountains surrounding the lake oozed mystery, and on the cycle back, the sun was shining brightly, making it a beautiful trip. Our butts, however, were very sore afterward. We don’t mountain bike often and much of the trail back was exceedingly rocky and rough, so those ol’ sit bones were just a touch sensitive for the next day or so. Worth it? Absolutely. Especially when you got to gaze out over the lake from narrow single track that ran alongside it.

Our last full day in Anchorage we drove to Whittier where we were supposed to take a 5-hour glacier cruise. That didn’t quite happen. You see, there’s this tunnel. It’s the only road into Whittier and beyond. It is a one-lane tunnel, And it is shared with train tracks. What that means is that it is only open for each direction of traffic for 15 minutes out of each hour. More or less. If you miss it, you get to wait. We missed it. By less than 10 minutes. We had underestimated how long it would take to get to the tunnel, how many slow RVers we would get stuck behind along the way, and so on. Long story short: we missed our boat. And we had no way of calling the Phillips Cruise office because there was zero cell service on that side of the tunnel.

Fortunately! The Phillips staff was super friendly and accommodating. As soon as we did arrive, they offered us a place on the next cruise that was scheduled to leave in 5 minutes. It was only a 3 hr 45 min cruise, but it was the only other one of the day. We took it. And rushed to figure out how to pay for parking before being the last people on the boat, followed only by one staff member who graciously waited to escort us onboard. 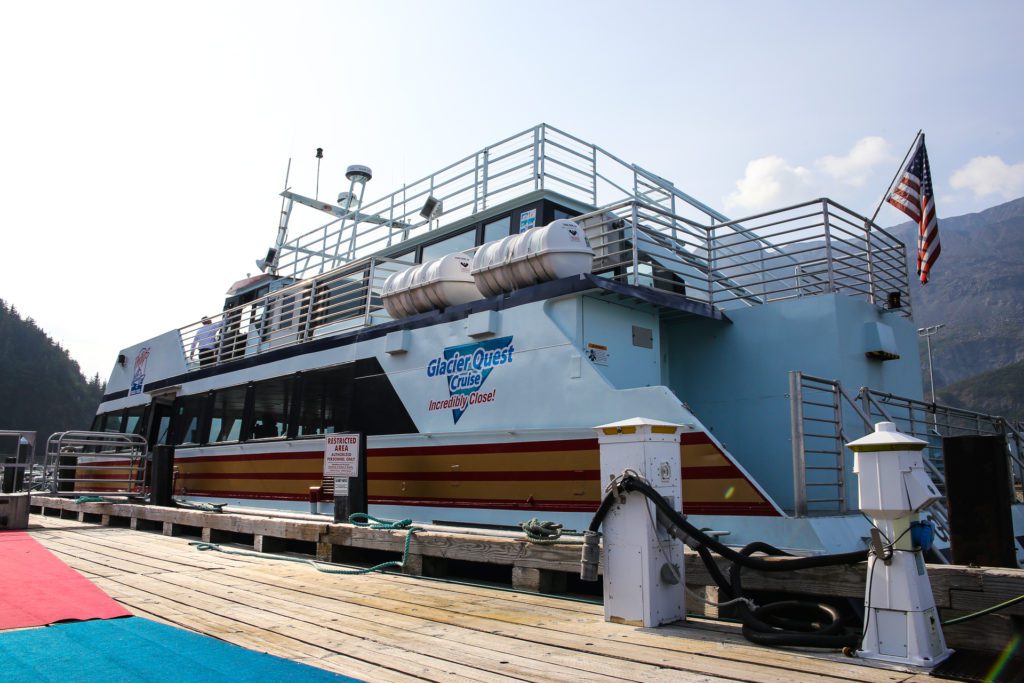 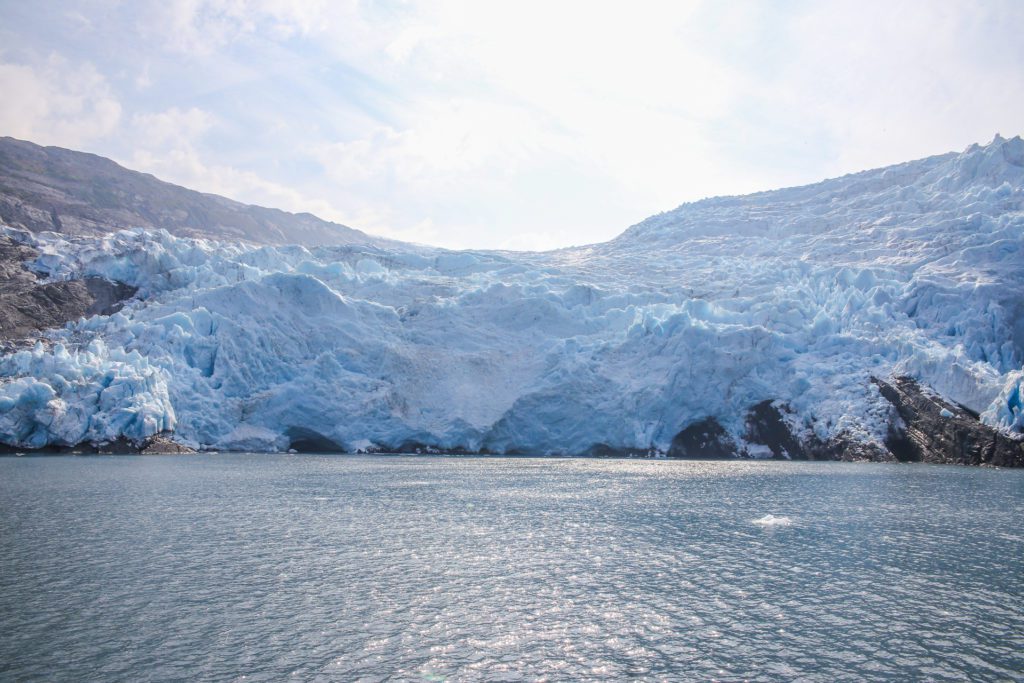 Once there, they served us a “vegan” lunch (not sure the kitchen knows what vegan means—that or they don’t have a true vegan option because our trays arrived with coleslaw, fruit gummies, butter for our rolls, and a York peppermint patty, all of which we sent back), and then accommodated us further by offering a new bowl of vegetable slaw with no dressing, which we gladly accepted. It would accompany the bean chili nicely. It was very considerate considering they probably don’t get requests for vegan meals often. But the staff was super friendly about it, even offering us free sodas instead of the cookies they serve toward the end of the cruise.

On the journey, we saw glaciers, briefly spotted a sea otter, watched some seals lounging on the rock, and paused to photograph a seabird rookery. We heard the crack of glaciers calving. It was cold. It was windy. I was glad I brought my gloves. It was naturally beautiful.

We saw another glacier on the hike we took afterward: The Portage Pass Trail. Especially at Alaska’s lengthy golden hour, the hike was stunning. And its terminus was at Portage Glacier and its glacial lake, so there was quite the payoff at this 4-mile round-trip trail that had quite the elevation gain (and loss, and gain again, and loss again). Honestly, It was one of the most picturesque hikes we’d been on in the state. 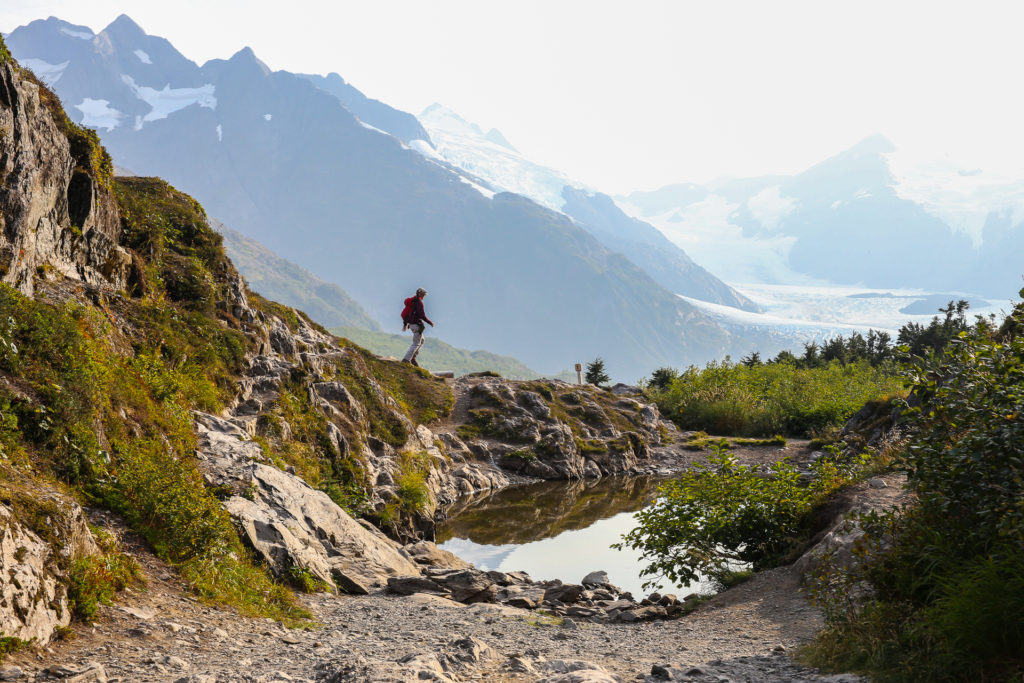 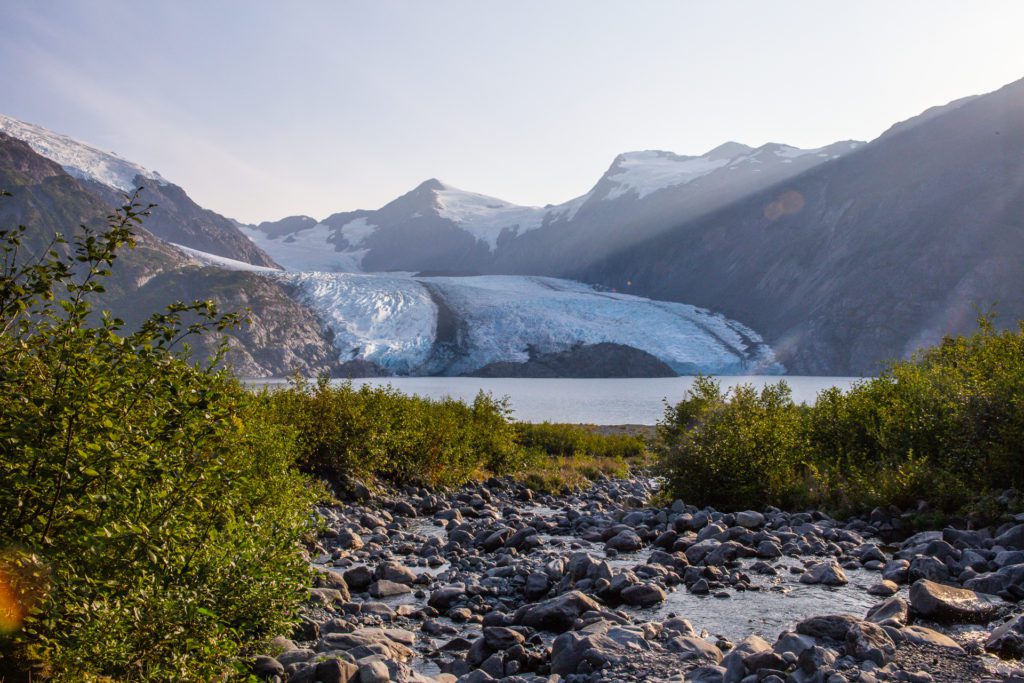 On the way back to Anchorage (where we would only pass through before heading back toward the Canadian Border), we stopped at the Alaska Wildlife Conservation Center. As vegans, we’re always wary of these sorts of places that can sometimes be more like zoos than sanctuaries, but while we were dubious at the sizes of some of the pens, there were lots of informational signs at this non-profit center explaining where the animals came from and most had indeed been rescued. Some had been involved in hunting accidents, others had been injured and required amputations, and still more had been abandoned by parents or sent from other conservation centers.

One animal that looked more than happy to have a steady stream of onlookers was a very happy black bear. His enclosure was sprawling, filled with trees and tall grasses in which to hide, and the entire time we were there he stayed near the fence, for a while entertaining visitors with his playful antics as he tossed a bone around, playing with and frequently and clumsily hitting himself in the face with it, then moving to sit awkwardly on top of a tree stump to pose for photos. What a ham. But there were also brown bears grazing lazily, musk oxen, moose, foxes, even a link, which, in true wild cat fashion, hid high on a corner platform where we could barely see her. 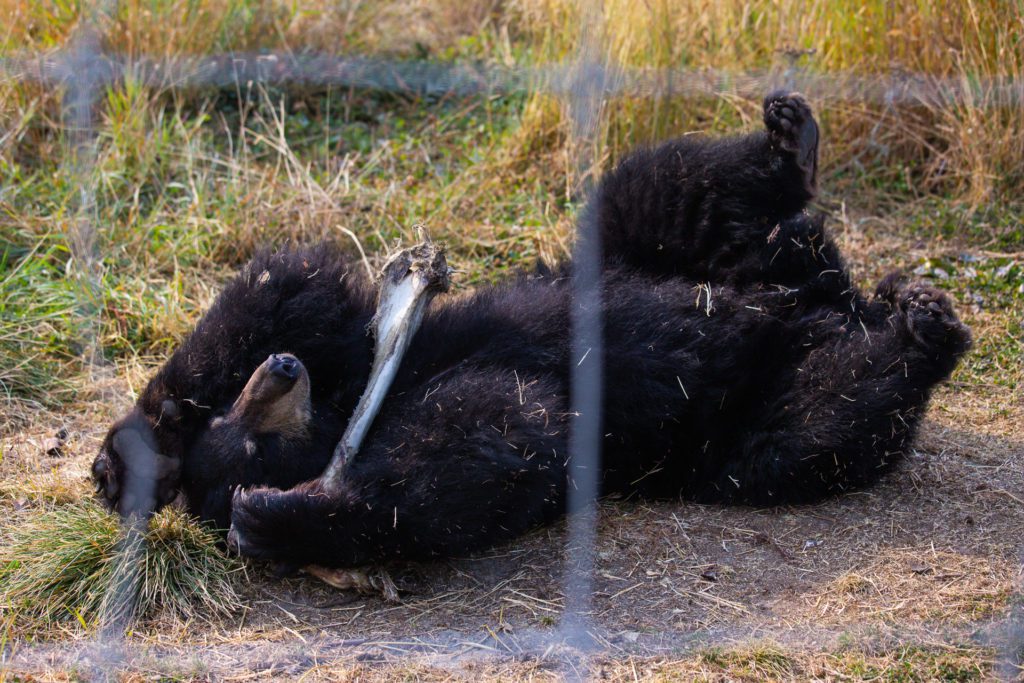 How happy does that bear look?

I also learned that porcupines might be my new favorite animal, especially if they only have three legs, so that’s a thing. 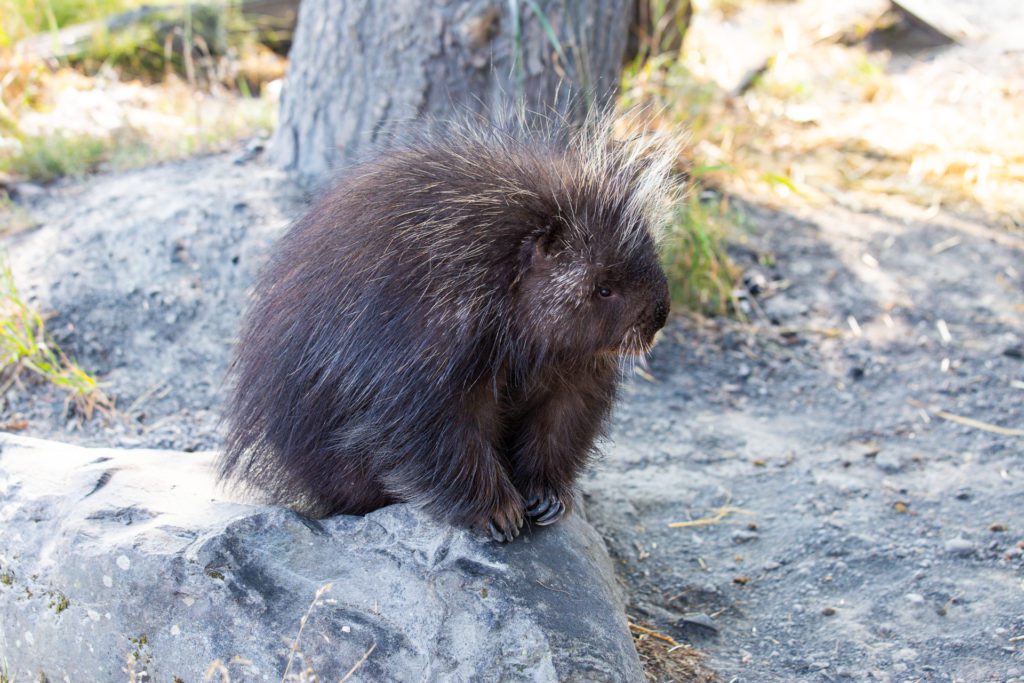 After that, it was a quick re-stock of supplies in Anchorage (peanut butter! hummus! stove fuel!) and off we headed back toward Canada. Our Alaska adventure was a wrap. For now, anyway. But the adventure wasn’t even half over!