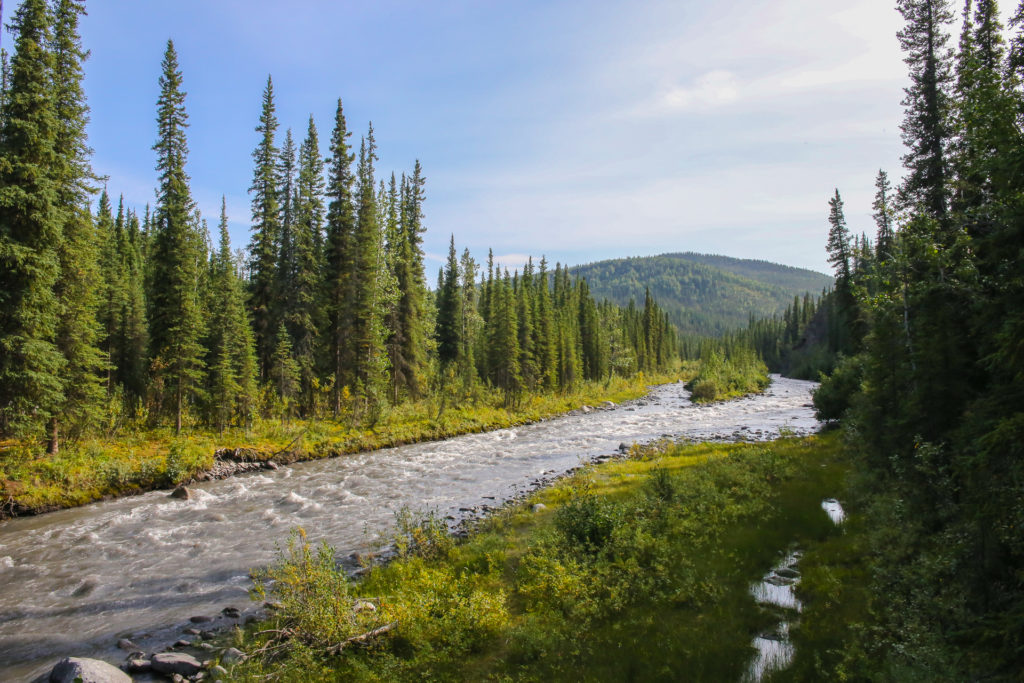 Backpacking in Denali: The Three Lakes Trail in Unit 1

The beginning of week three of our Alaska road trip (read about week one and week two) finally saw us in Alaska! We were thrilled to have reached our destination (though the journey had been phenomenal) and to be meeting up with friends in Anchorage. There would be so much to explore near the city, but our sights were set on backpacking in Denali National Park. 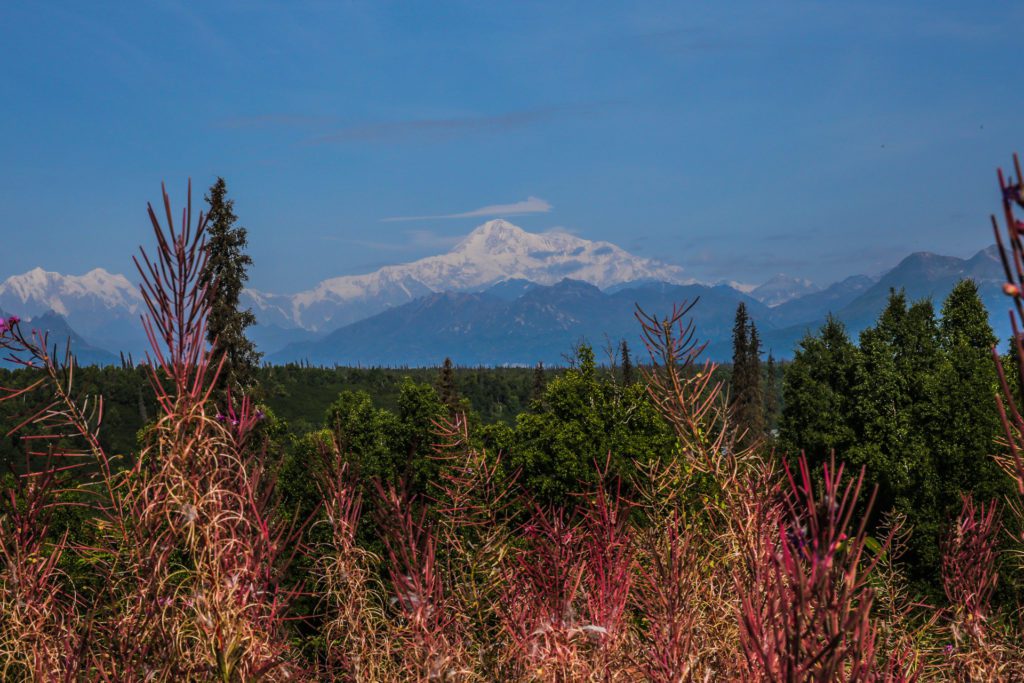 Lucky for us, it was nice the day we drove into the park and you could see Denali, North America’s highest peak, shooting up into the sky, it’s feet sprawled out to claim the land all around it that obviously belonged to this king of the continent. It was freaking huge. It’s just one of those mountains that as soon as you turn a corner and see it in the distance, you’re all, “Holy crap, that’s a mountain!”

I say lucky for us, because just about the rest of the time we were in this wild national park, we got dumped on. We had one day—our first day—that we weren’t soaking wet. The remaining three days? Yep. Drenched. Almost constantly. 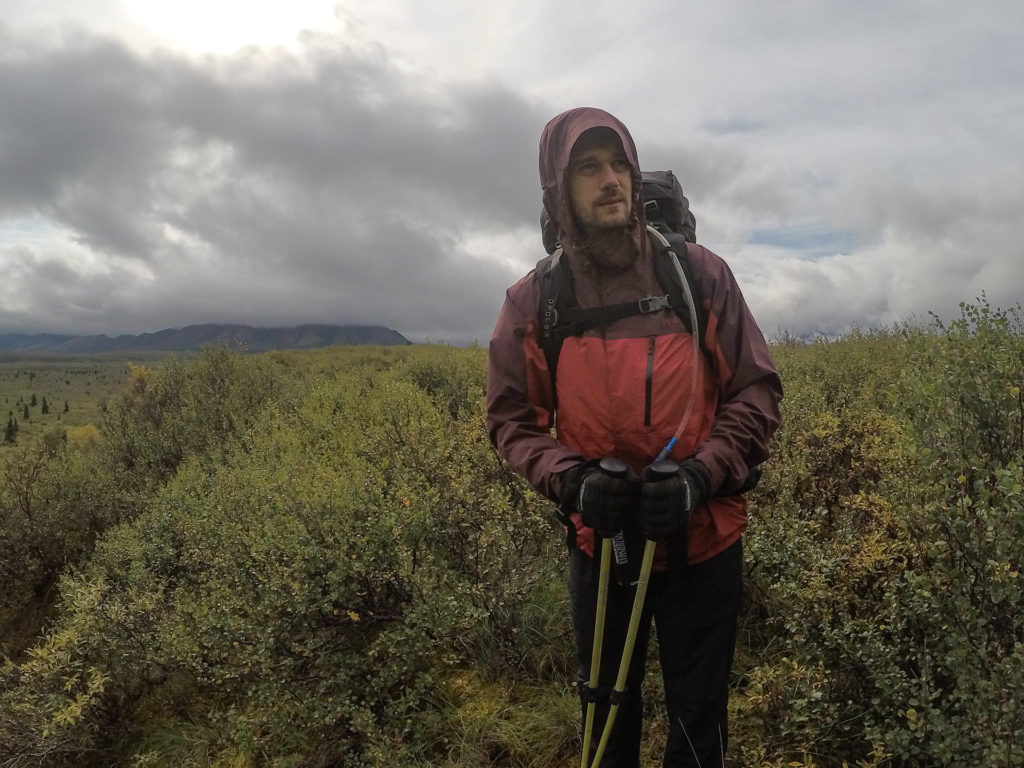 Josh. Wet. Because that was what backpacking in Denali looked like for us.

About Backpacking in Denali National Park

First, here’s a bit about the park: You can only drive about 15 miles into the park, then it’s all paid buses. There’s a free shuttle bus (and I do mean bus, as in school) that will take you as far as that 15 mile mark, but after that it gets expensive fast. Like $40+ expensive depending on how many hours you want to go. And you can go some six hours to the next visitor center.

Also, it’s a cheap national park. It’s only $15 to enjoy the immense beauty of it all. And backcountry permits are free (!!!) and can only be reserved up to 24 hours in advance. And if you want to go backpacking in Denali, the park is broken up into units. You choose which one (or more) you want to hike in. Units 1, 2, 3, 4, 5, 24, 25, 26, and 27 are accessible by the free bus. It’s full-on wilderness backpacking, so there are no trails, no pit toilets, no campsites. You blaze your own trails and pitch your tent in any clearing that isn’t visible from the road. You also must have a bear canister; if you don’t, the park will lend you one free of charge. You also have to go through about an hour of video “training” before they’ll give you a permit, so be prepared for that. 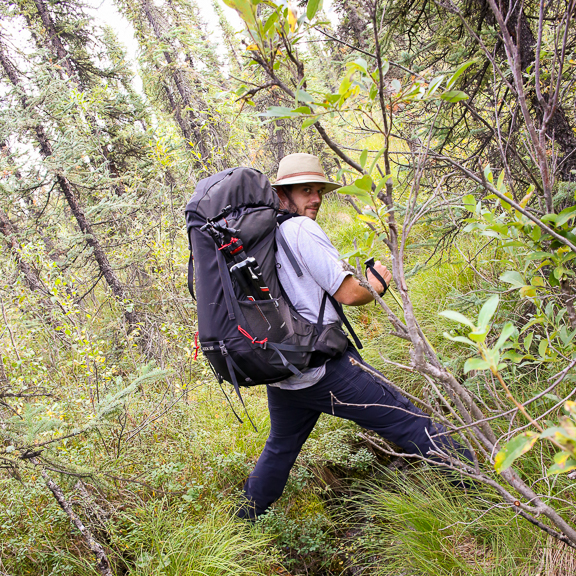 Down the (lack of) Trail We Go

We arrived at the park later in the afternoon, so our first choice of unit wasn’t available. So we opted for option two: a one-nighter in Unit 1 followed by two nights in Unit 4 (at the edge of the free shuttle route). The ranger showed us a route up the side of a hill in Unit 1 and said there wasn’t a trail but that was the route and we’d find a trail at the top of the ridge.

I hate that ranger.

We followed the route, using our Gaia GPS app to make sure we stayed on “course,” and bushwhacked through miles of swampy weeds and reeds and bushes and brush. It. Was. Exhausting. And we didn’t think we’d ever make it to Three Lakes. I may have sworn under my breath at a whole lot of plant life whose sole purpose in life seemed to be to trip and tangle me. And then, 2-3 hours after we started, we very suddenly popped out onto a very well-worn and obviously intentionally made trail. A trail that very obviously went all the way down to the river where we had left that very same trail to go the ludicrous bushwhacking route the ranger had directed us to. 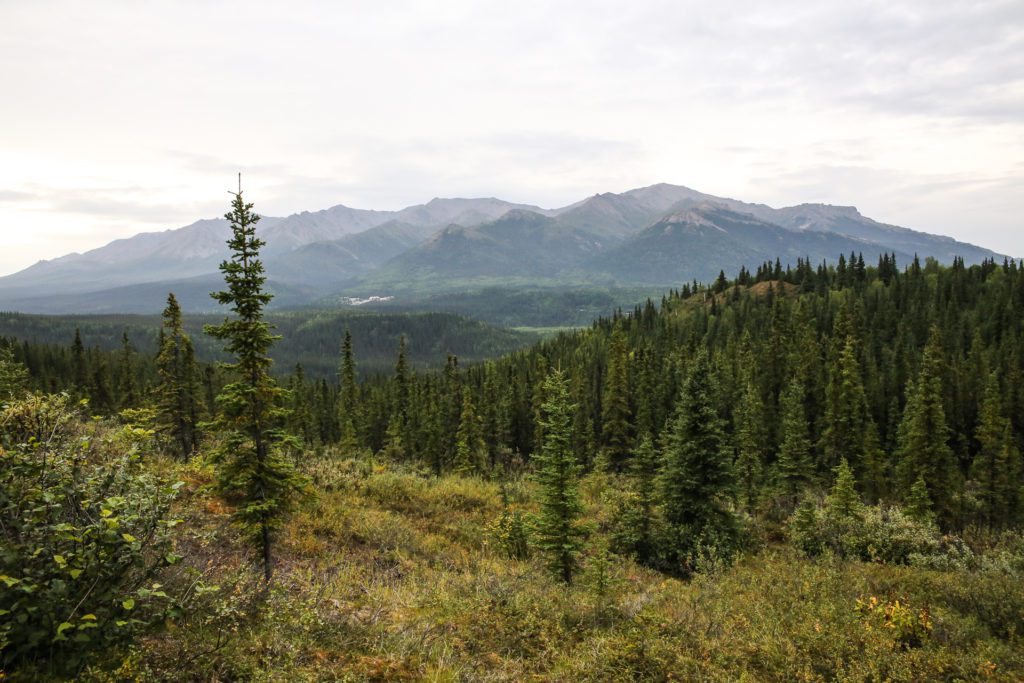 The view from the top in Unit 1

Do you now understand why I hate that ranger? Just wait. There’s more to come later.

Once on the trail, we obviously made much better time, though we were both getting a touch cranky and impatient and probably a little hangry. We keep trying to find a clearing to pitch our tent, but nothing presented itself that wasn’t visible from the trail, so we hiked all the way down to Lake Three, pitched our tent at 8:30 or 9:00, saw bear-shaped shadows everywhere as we cooked our dinner, and promptly went to bed.

We took the trail aaaaalllll the way back the next day. No more of that bushwhacking nonsense, thank you very much. 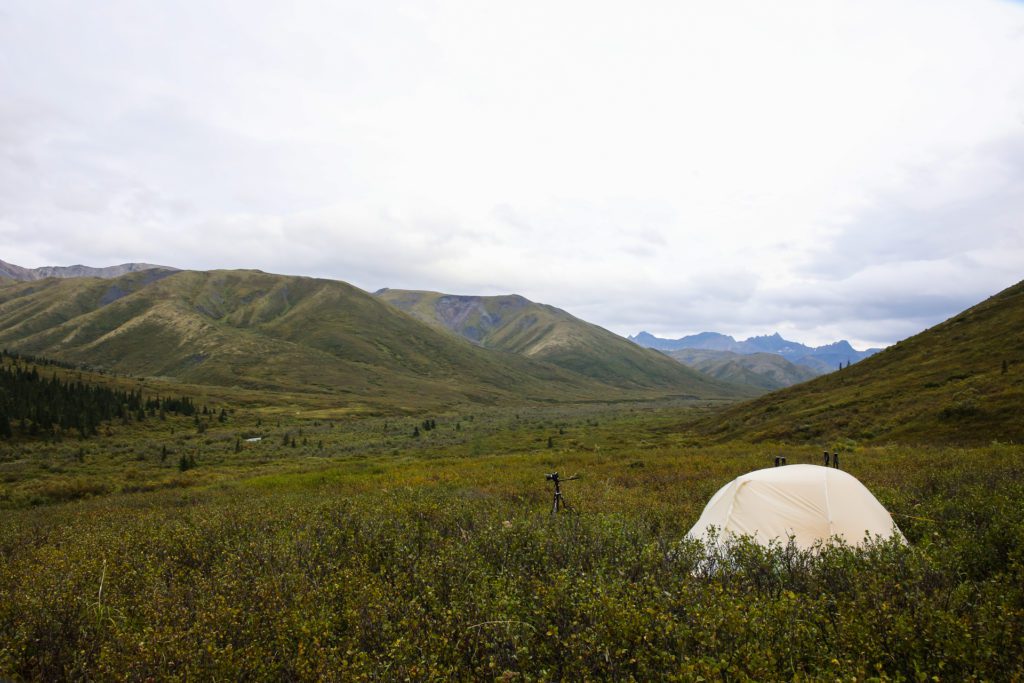 Our campsite in a hill in Unit 4

But then we had to do it all over again in Unit 4. And once again, we took that same ranger’s advice (we probably should have known better by now) to start at the Savage River drop-off—the terminus of the free shuttle—and hike in—bushwhack, rather—on the right side of the river (because the shorter route in on the left side was blocked by another creek that was supposedly waist deep, it was easier going on the right side, blah blah blah). Wrong again!

To be fair, I don’t know what the left side of the aptly named Savage Creek (as it was more like a narrow river) was like, but it could not have possibly been worse than the right side, which was 90% swamp, 70% icy creek crossings, and 100% miserable. If you had been there, you’d know the math totally adds up. And to top it all off, the light rain that had started earlier in the afternoon was now a persistent, soaking rain. Our feet were soaked, our clothes were soaked, gear that claimed to be waterproof clearly was not, and once again, we had gotten a late start, underestimated the difficulty of the wilderness terrain, and were exhausted after an hour of tramping.

So the first clearing we saw that wasn’t flooded and had just enough scrub around it to hide our low tent from the road was where we set up camp, ate Clif bars for dinner because we had no energy or motivation left to cook, and immediately went to sleep with our wet clothes draped over our sleeping bags in hopes they would dry out a little by the morning.

Neither did our shoes. So taking off our one set of warm, dry clothes and putting on the cold, wet ones was probably the most painful thing I’ve ever had to do in my life. But those dry clothes had to stay dry at all costs, and it was still sprinkling. Fortunately, it stopped raining and the sun actually came out for the afternoon, so by lunchtime, when we celebrated finding a fairly worn path up on a ridge that made travel quick and easy, we were mostly dry. Except for our shoes which, I kid you not, took three days to dry out. 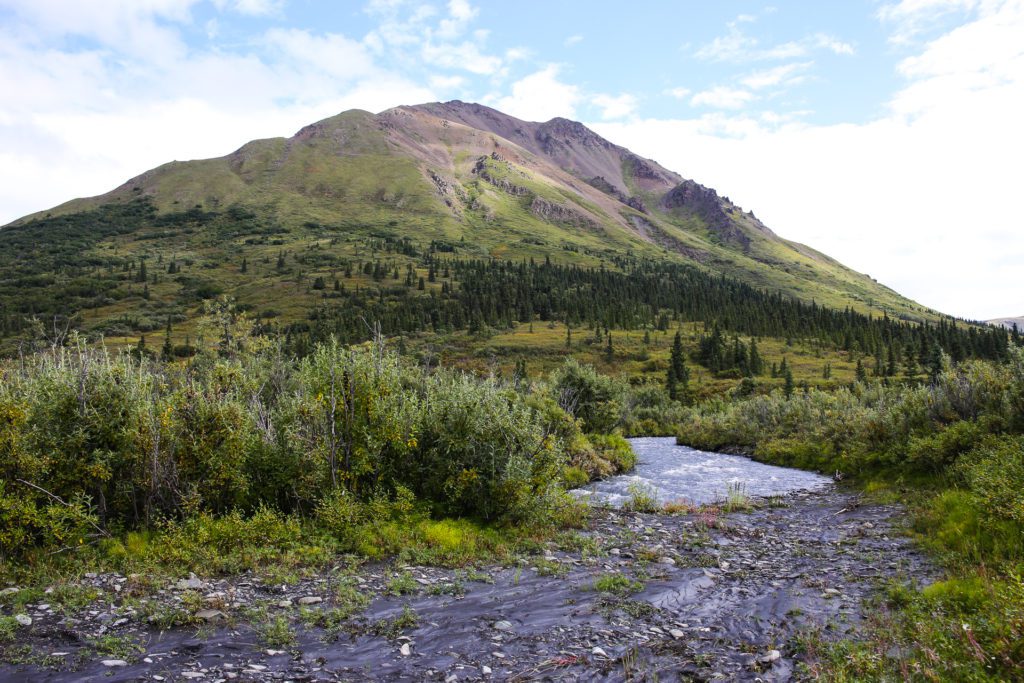 So we pushed onward, hoping to make it to the valley to set up camp for the night, which we did. We didn’t have enough time to venture very far, and we knew it was supposed to rain again that night, so we didn’t want to push our luck, but we found a lofty hill with a perfectly sized clearing surrounded by tundra blueberries and a view of the mountains and the creek below, and reveled in our good fortune. A view like this, one without a single other soul in sight, entirely wild and real, was worth it. 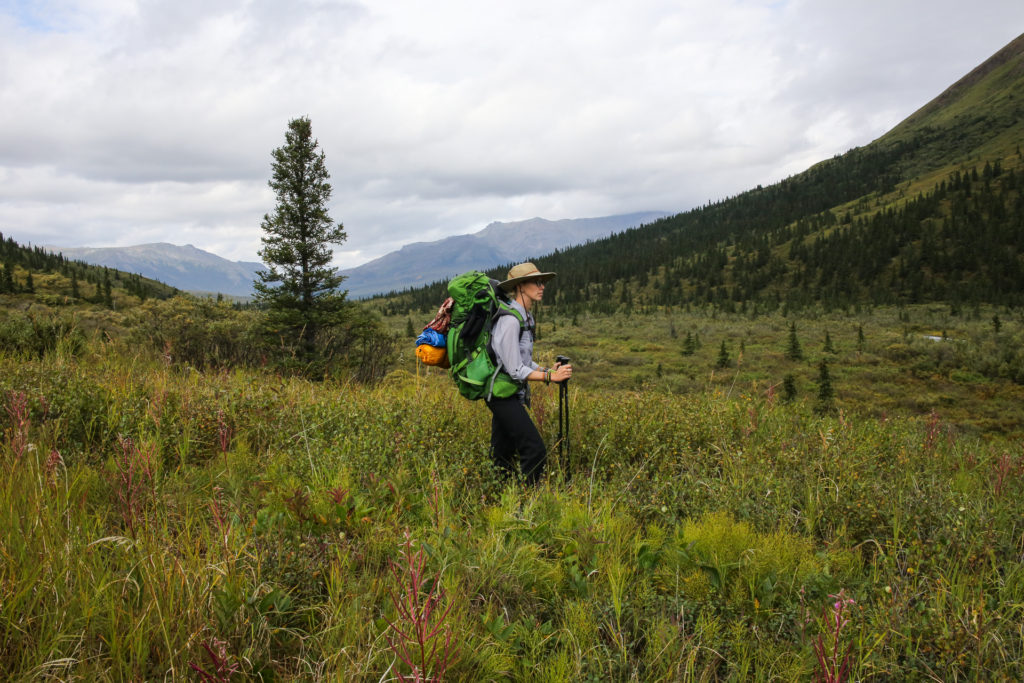 A brief moment of peace while backpacking in Denali

The next day, the hike out wasn’t as difficult. We had decided to head toward the closer “way out” by the Mountain Vista trail, the way that purportedly had a waist-high creek we’d have to cross. Even if it was that high, we were on our way to dry clothes, so we wouldn’t be wet long, and we wouldn’t have to go through the marshy, swampy mess that had addled our nerves so on the way in. We retraced our steps for some of the journey, then started following close to the creak to see where we might be able to cross. As we wandered down a short stretch of wide, rocky ground, we turned a bend and Josh bent over and laughed. There, across Savage Creek, was a bench. A viewing bench at the end of the Mountain Vista trail. About two hours sooner than we had imagined we’d reach an exit. It really was that much closer. And that easy.

I was going to murder that ranger. And in case you’re wondering, no, there was no waist-high creek. It wasn’t even knee-high, though we did have to cross two sections of bitterly cold, fast-running water that turned our feet to popsicles in about 5 seconds. My feet have never been so cold. But it hardly mattered, because we were out. All that was left was a short walk up a rocky path and we were at a shuttle stop ready to be ferried back to our car. And hot coffee. And dry socks. 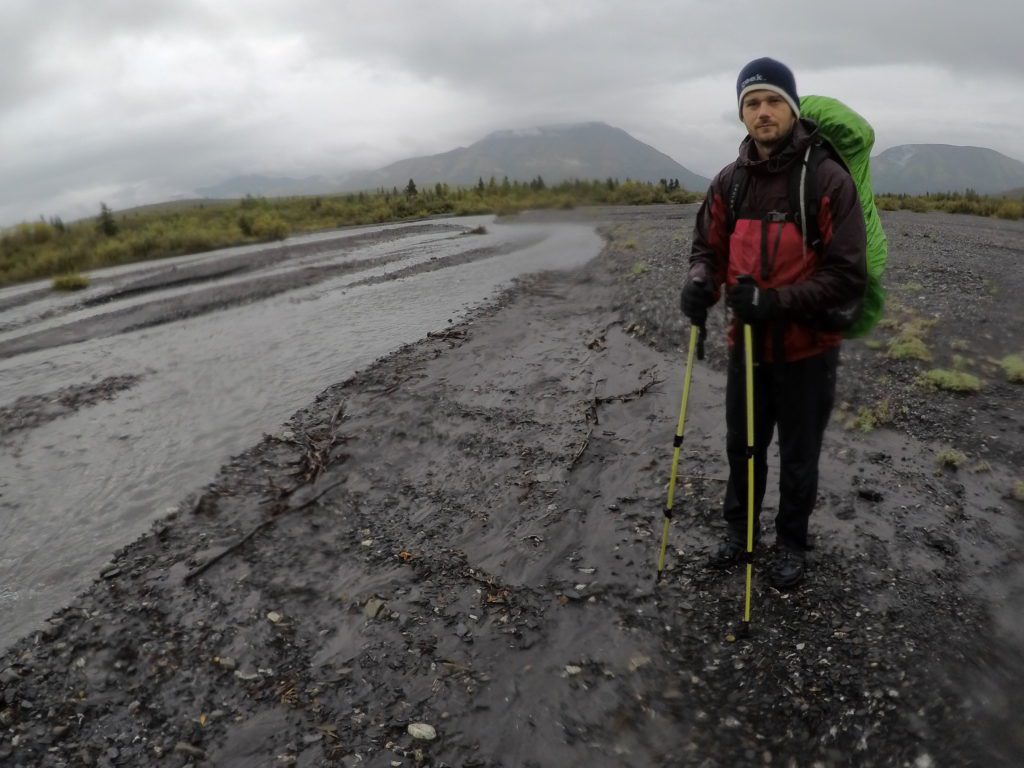 Backpacking in Denali was the hardest I’ve ever worked to go backpacking. And I obviously take a little masochistic pride in the trials and sense of accomplishment that comes with it. Because I secretly love to do things the hard way. And it was hard. And exhausting. And cold. And wet. And occasionally miserable. But also empowering and stunning and hilarious and rewarding. And naturally, when it’s all over, you forget how miserable you were in a hot five seconds and the highlights were totally worth the pain. But if I were gonna do it again, (and I totally would) I’d get a second (or third, or fourth) opinion from a few different rangers before heading out.

Stay posted as the adventure continues with week four of our Alaska road trip!