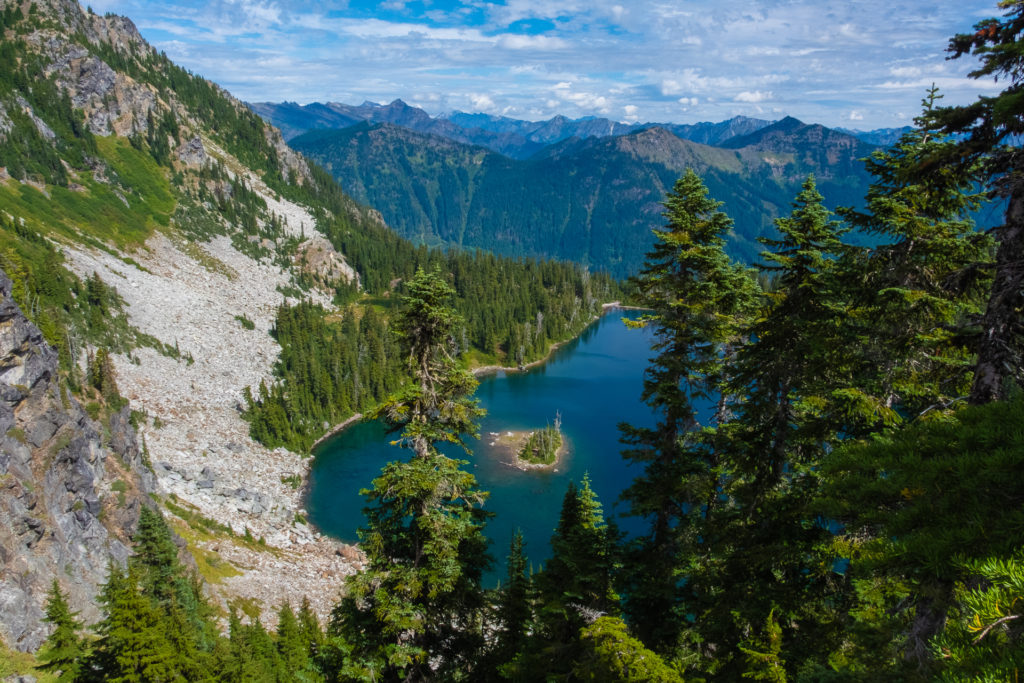 Theseus Lake from Minotaur Lake on the Cascade Loop, Washington

If you’ve been keeping up with our (very erratic and inconsistent) posts about our 2-month road trip from Austin to Alaska, you might be wondering what happened to the period between Alaska and this here post about the Cascade Loop in Washington state. Well here’s the sitch: there’s not much between Alaska and the lower 48-Canada border. At least, not on the route we chose.

After leaving Alaska, we went back through Watson Lake and Whitehorse, but then headed south through British Columbia on Route 37 and then Canada 16 to Prince George. Then it was on to Princeton and Osoyoos before crossing into the U.S. again. The most exciting thing on the trip was a killer free campground–Kager Lake–and the wildlife we saw along the way.

What wildlife, you ask? Black bears. Three of them. Grazing on the side of the road. In a two-hour timespan. Very exciting.

But the rest of the drive was fairly uneventful as far as towns or activities go, though the scenery was spectacular. 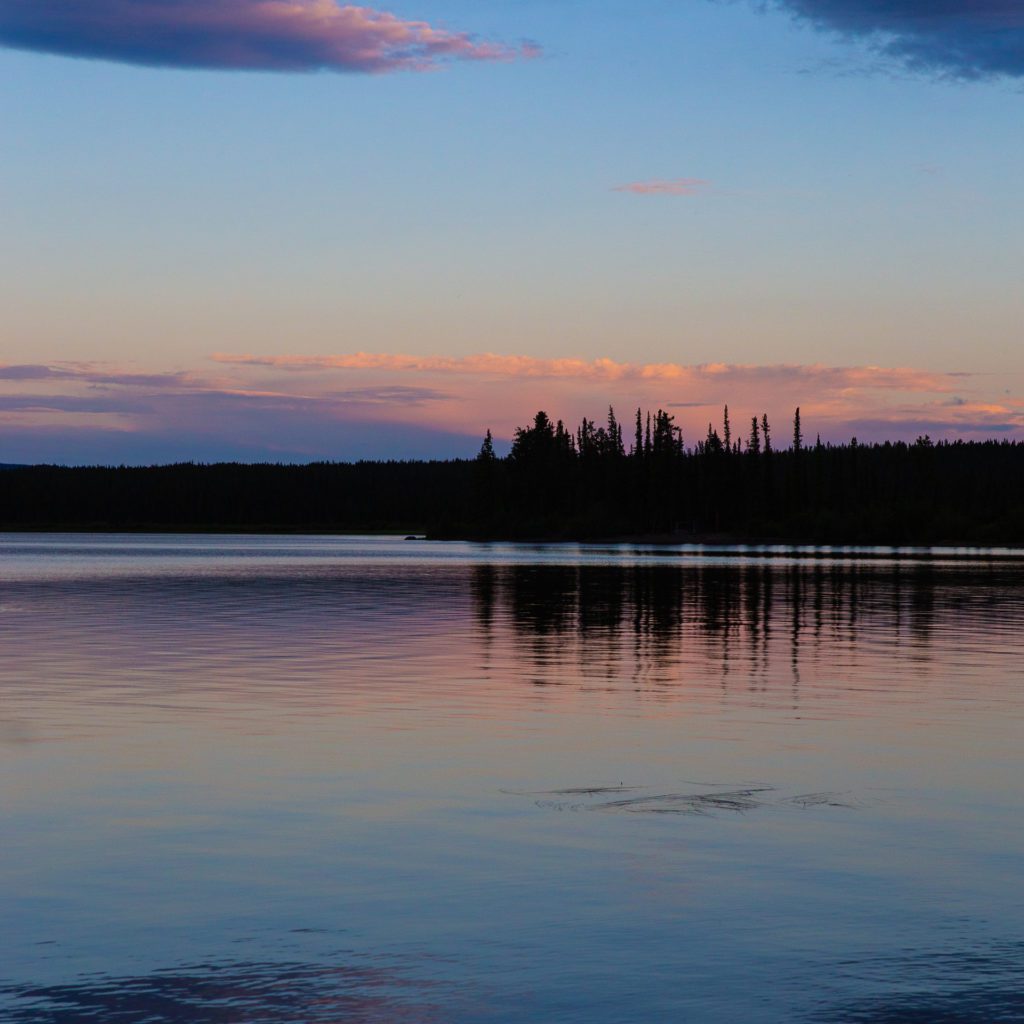 Sunset on Morley Lake, BC, Canada

Once in Washington, however, we immediately started around the Cascade Loop, a 440+-mile circle that includes interesting towns, stunning hikes, and ferries.

We started the Cascade Loop in Pateros, which, fair warning, isn’t much to look at. So it was on to Chelan, which at least has a picturesque lake and a little downtown with good coffee, lots of beer and cider, and boutiques. It was Wenatchee, though, where we stopped for more than an hour.

Because there was a YMCA. And YMCA’s have showers. And it had been a while since we had used such modern niceties. Like, a week.

I’m not a huge fan of paying for showers, but when your own musk starts to fill your Prius to the point where you notice it every time you climb back in, a $3 shower is probably called for. Properly sanitized, we visited the indoor Pybus Public Market, which had less vegan food than anticipated, but we remedied our empty bellies with a visit to Wenatchee Health Foods, a little local grocery. Then a nice wander downtown to Arlberg Sports outdoor store and a cheap cider tasting at the visitor center (yes, you can taste beer, wine and cider at the visitor’s center…) wrapped that afternoon right up. 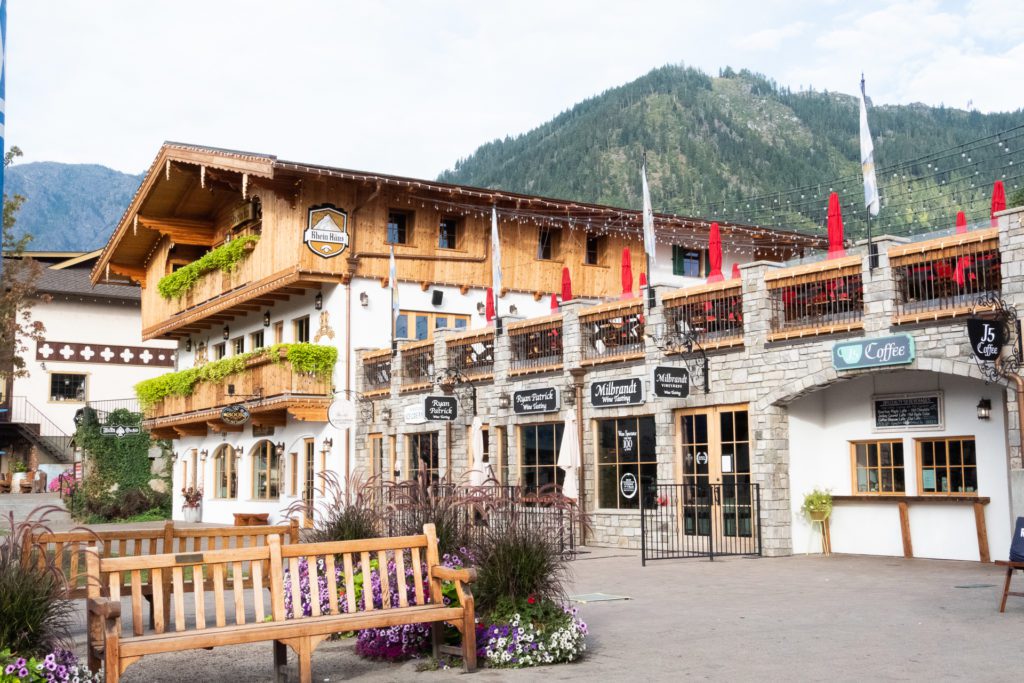 Then, ready to move on sooner than anticipated, we drove along the Cascade Loop to Leavenworth, which is only 30 minutes away, but crosses that magical boundary that separates “the dry side” from “the wet side” of the state. We like “the wet side.” It’s green. And mountainous. And while Leavenworth is basically just a huge tourist trap of Bavarian kitschy-ness, it’s not a bad place to explore for an afternoon. There’s a killer distillery (Blue Spirits), a regular art and makers market (check out Ali Hancock’s art–we’re obsessed), and even a spot of vegan food. 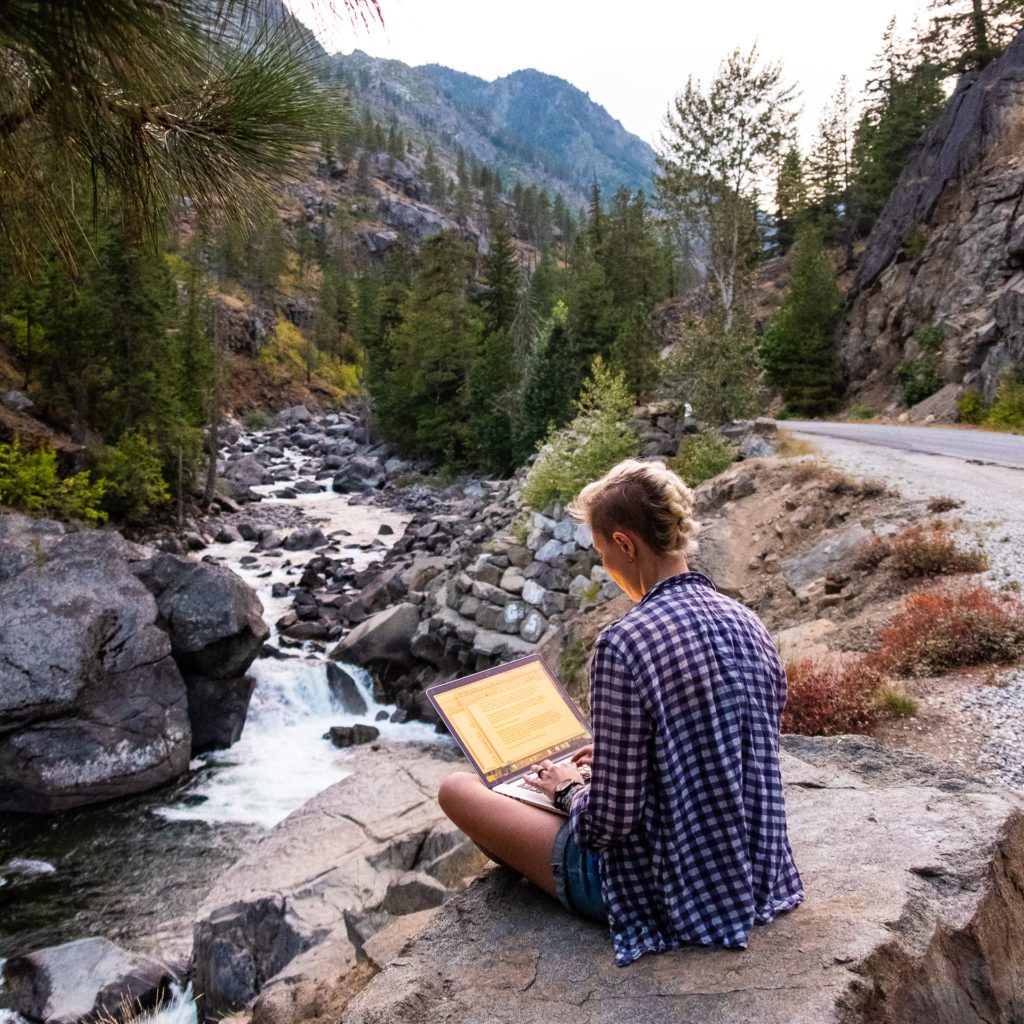 Working creekside in Leavenworth, Washington on the Cascade Loop.

But most importantly, there are a crap ton of spectacular hikes in and around the area. We overnight parked at one of them, which, extra plus: was close enough to town to still have service so I could work, but it was the next day’s hike west of the city that really impressed: Minotaur Lake. 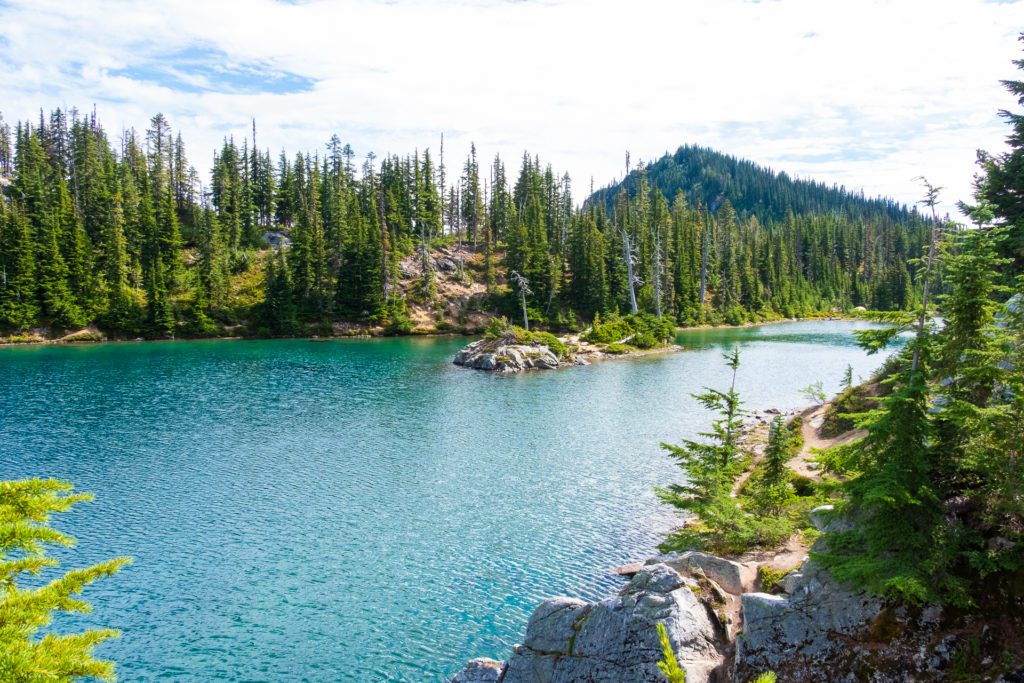 Minotaur Lake on the Cascade Loop 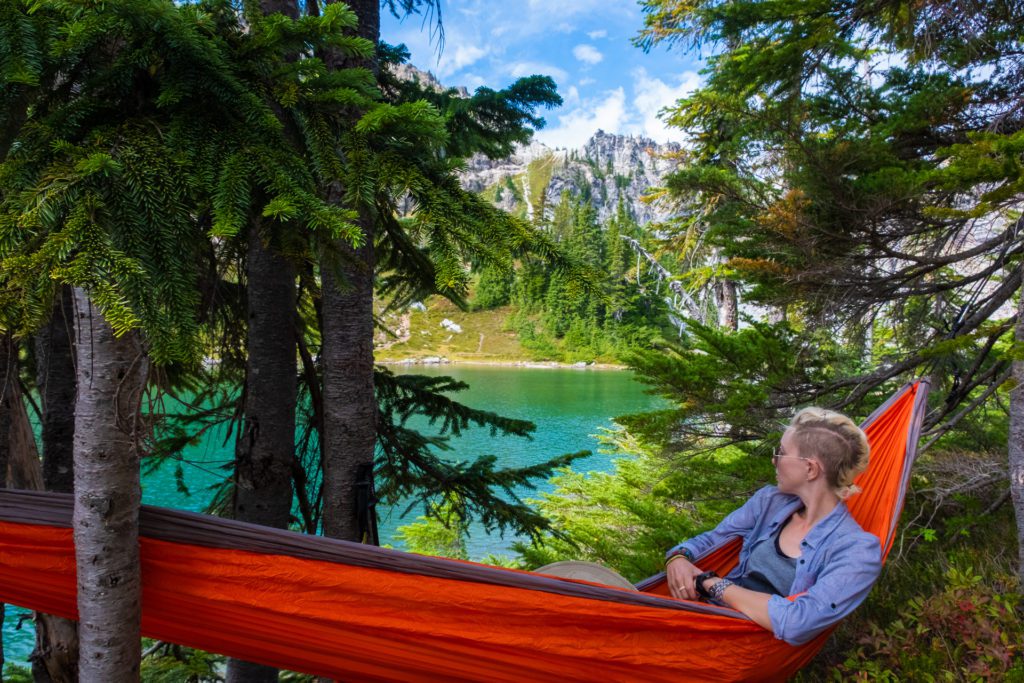 It only went one way–up–but we’ve never been gladder to have brought the hammock. Also, we’ve never been more disappointed to not be pitching a tent. There’s camping available up there and those were some of the best views in the state. That we’ve seen, at least. So we strung up the hammock, ate and napped by the lake, and had to force ourselves to hike back down. We didn’t have enough food or clothing to even sort of cowboy camp for the night. 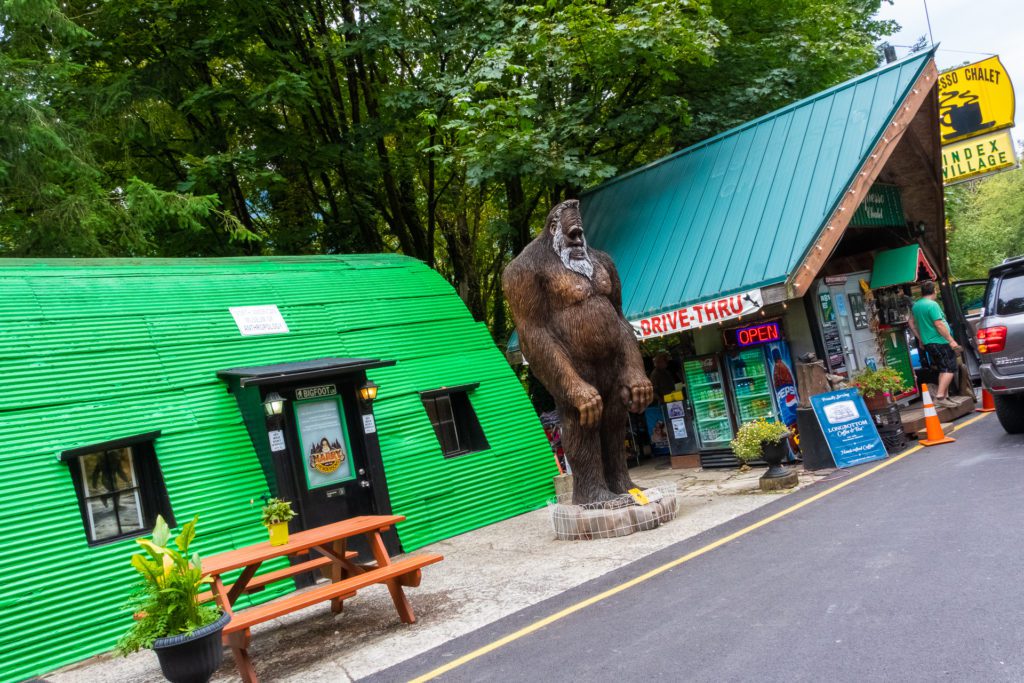 The Espresso Chalet in Index, Washington, a filming location for “Harry and the Hendersons.”

Our next interesting stop will only be interesting to fans of Harry and the Hendersons. I grew up watching the movie, so when I saw that there was a filming location on the route in Index (where we could also get coffee), I was stoked. It’s the location of the bigfoot museum and I’ve never wanted to buy an overpriced T-shirt to commemorate the visit so much in my life. I’m ridiculous. I know.

Whidbey Island was our next destination the following day. We spent a day on the island after taking the ferry over (which cost about $15 for both of us and our car). We discovered that Langley is overrun by pet rabbits that were accidentally let loose some years ago and have since done what rabbits do (procreate) and taken over the city. Not a great thing, but an adorable one for those of us who are obsessed with bunnies. Several times Josh had to insist that I contain myself. I did not conduct myself in a dignified manner. I’m basically a small child when I see animals. Any animals. But mostly bunnies. 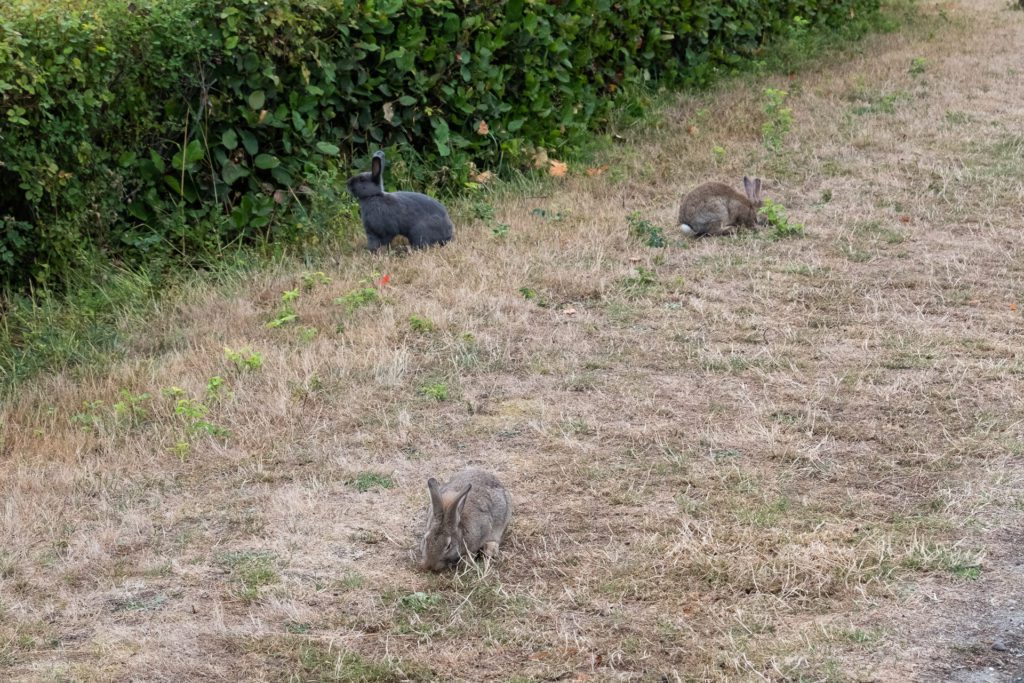 We meandered through most of the small towns which had little to no vegan options and lots of boutiques and galleries, most of which were closed because it was Sunday. But we did take a nice scenic hike in Deception Pass State Park and take a few snaps of that bridge. 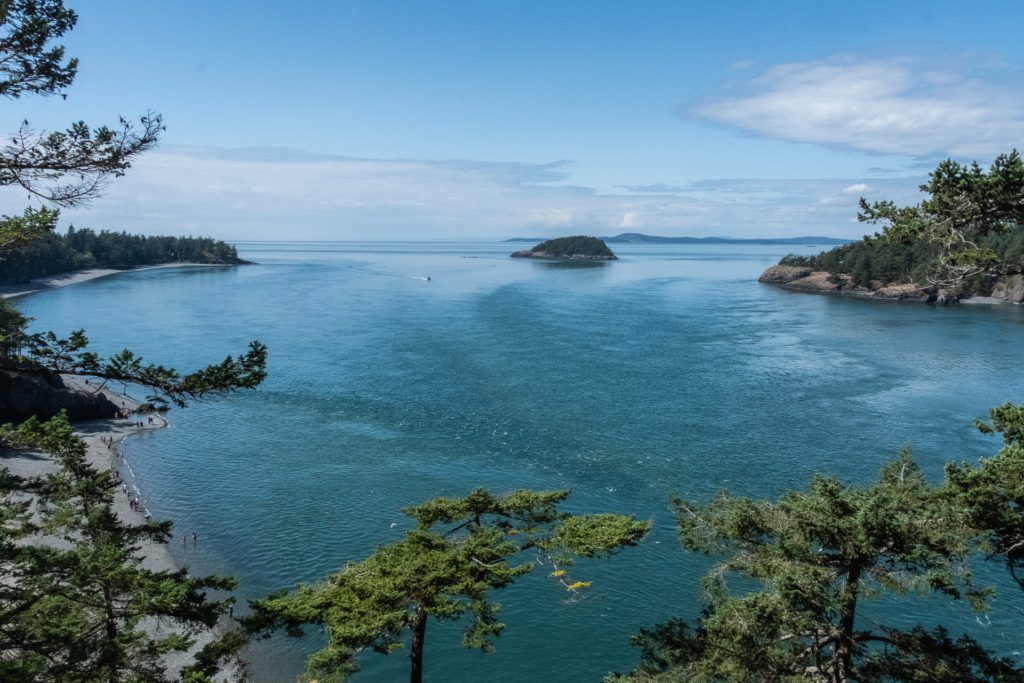 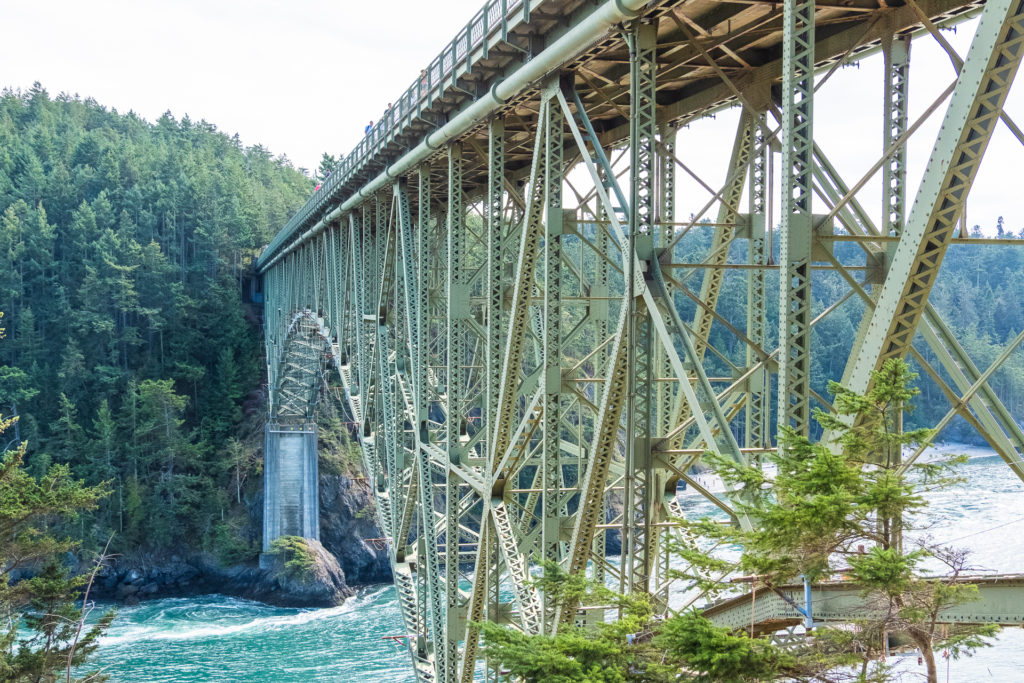 From there, it was more or less straight on to North Cascades National Park (with perhaps a day in between to catch up on work before we ventured into the backcountry–this isn’t vacation, after all)! 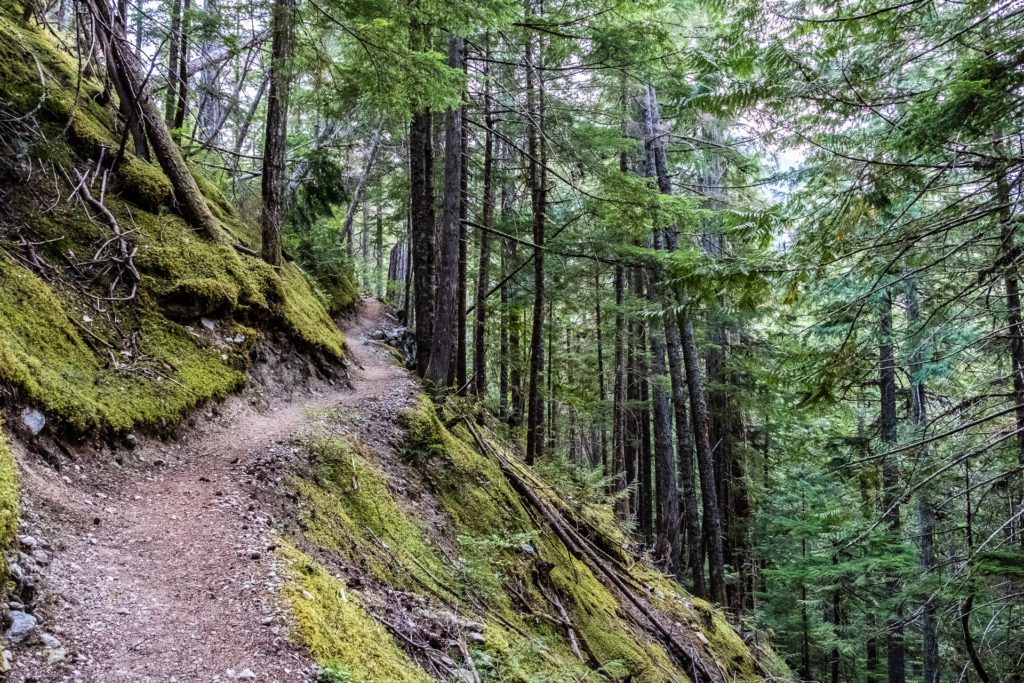 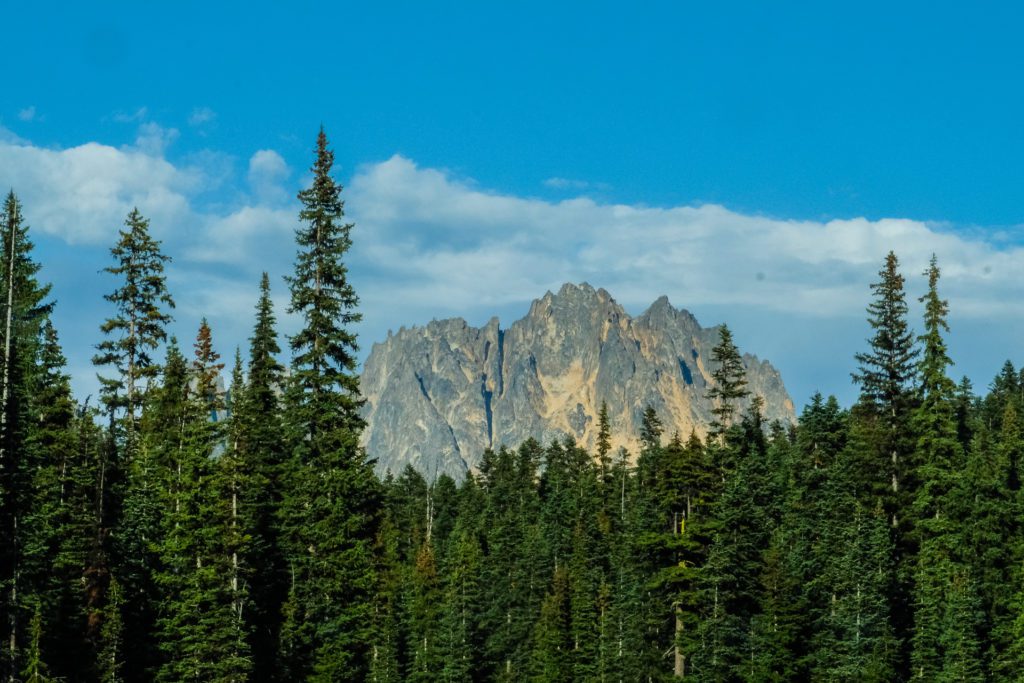 Both entrance into the park and backcountry permits are free (huzzah!), and we had made no plans nor picked a route, so we asked the ranger for recommendations. We took them. It turned out not to be the hike with the most epic views of the Cascades, but what it lacked in mountain vistas and alpine lakes it made up for in solitude. During three days out there we didn’t see a single other person until we were about a mile from the trailhead. 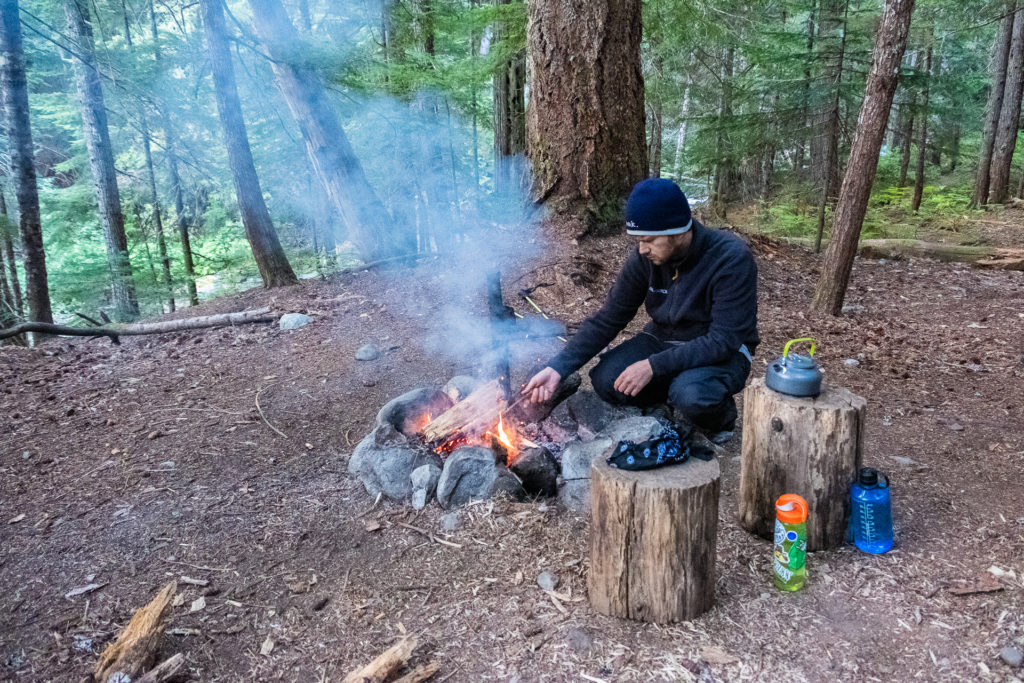 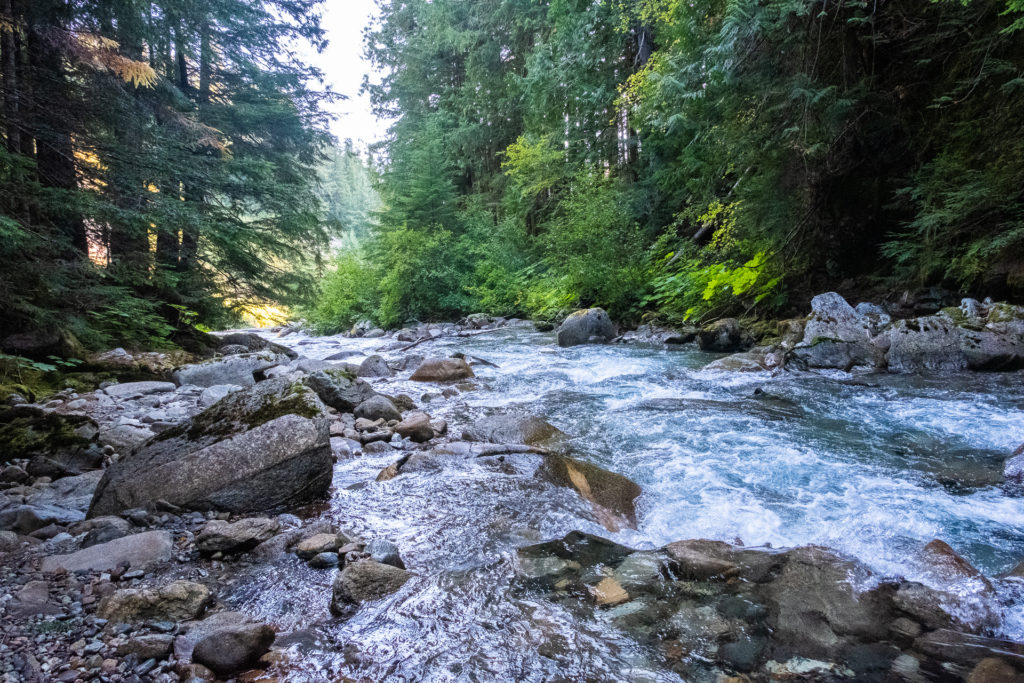 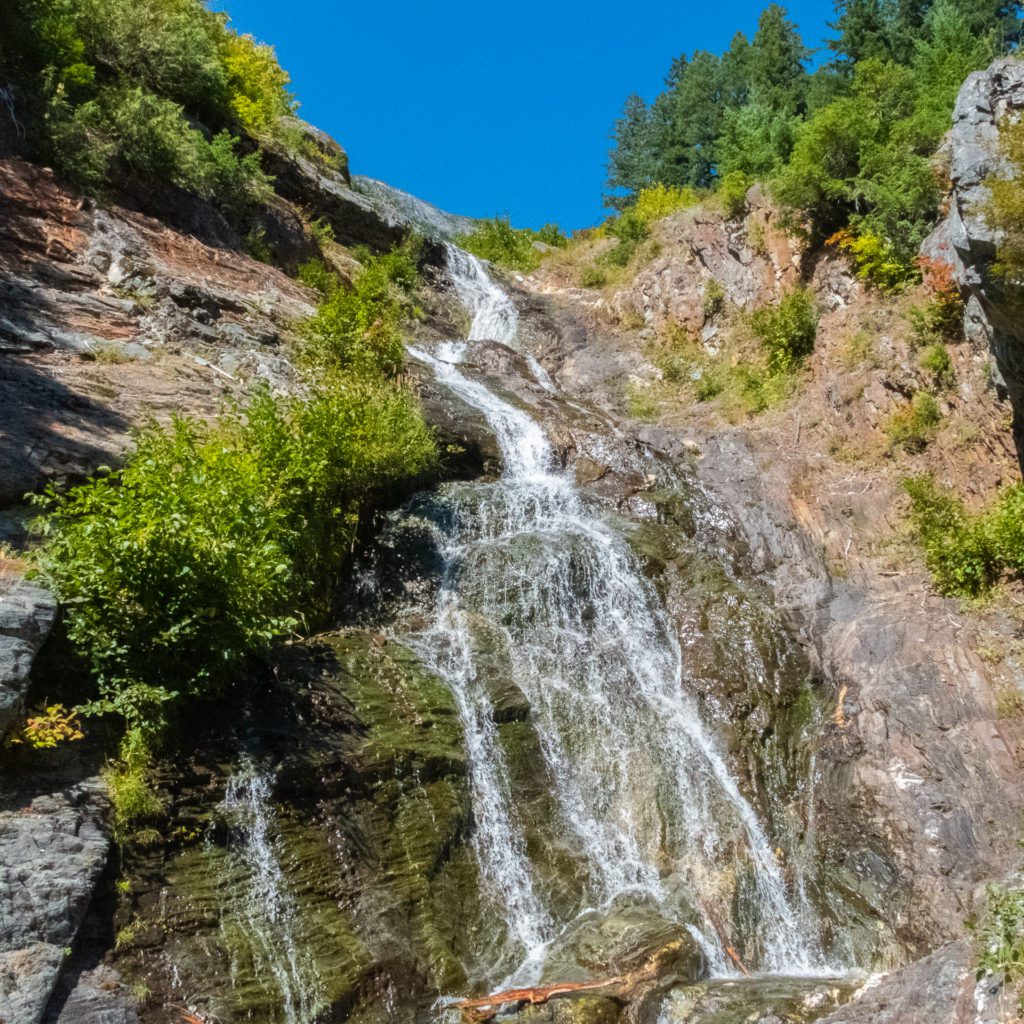 We had the entire campsite to ourselves for two nights. It. Was. Glorious. And since we stayed at the same site for two nights, we brought the hammock, read by the creek, played games, napped, stoked the fire for hours, and did almost nothing escept scramble up the nearby precarious waterfall. It was as close to “vacation” as we ever get: no laptops, no wifi, no cell service, just us and nature.

And as awesome as it was, I took it for granted. Which I realized when we arrived a week later at the obnoxiously overcrowded Glacier National Park and couldn’t take a breath without sighing on another human being. But that’s another post. 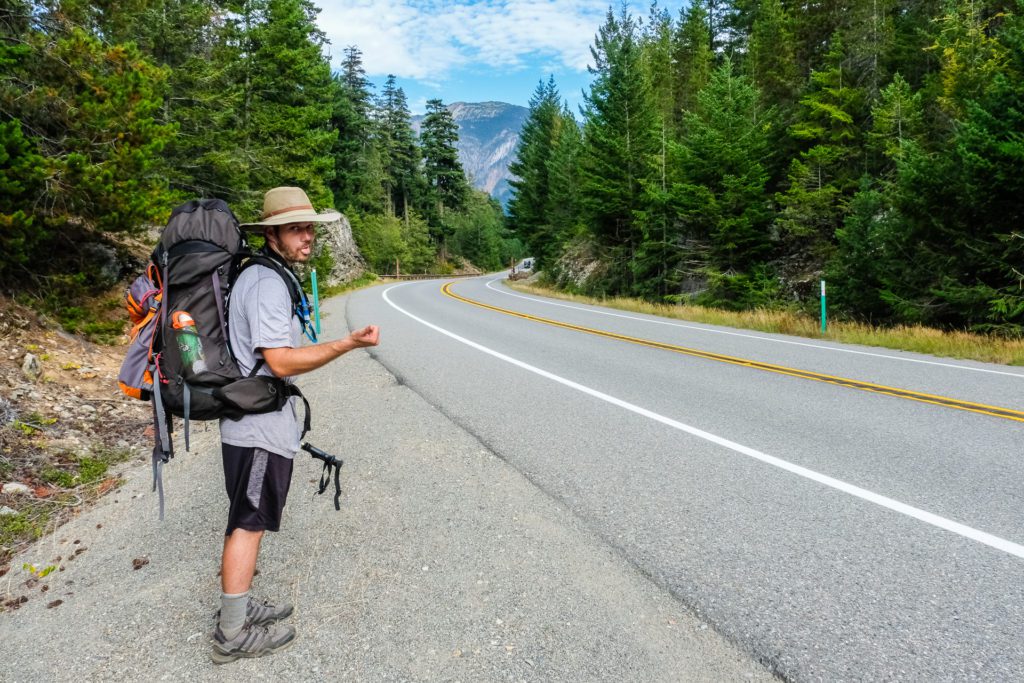 When we hiked out, we had to hitch back to our trailhead as the trail didn’t loop all the way back. Having had no trouble hitching in other (foreign) national parks, we assumed this would be easy. It was not. We ended up just approaching an older couple that exited the trail after a short hike (we had passed them on our way up as they headed down and we exchanged a few friendly words) and asking them straight up if they could give us a ride to our trailhead. It worked, which is why you should always be friendly to other hikers.

Which you’d know if you read our post about backpacking in Banff.

From there, the Cascade Loop was practically a wrap. We passed through Winthrop, where we would have stopped to browse, but it was evening and everything was closed for the day. It was fashioned rather like an old west town, but not so kitschy that you’d roll your eyes and move on. But alas, the sun was setting and we had to find a place to sleep in our car. We had to rest up before our brief stop in Spokane, Washington where we had actually booked an Airbnb. Not for relaxation, mind you. While most people may book Airbnbs simply because they want a nice place to stay for a few days to enjoy their vacation, we only pay money for a bed when we’re desparate.

And this time, desparation came in the form of looming deadlines that required a kitchen. So, yeah, we booked an Airbnb just so I could use the host’s kitchen and make and photograph recipes that were due in a few short days (I’m a recipe writer in addition to a travel writer, remember). So that was fun. And our host totally didn’t mind when we burned sugar in her oven and her house smelled faintly of that fantastic odor (although, the apple strudel we offered her in exchange might have helped).

Even with the work, we still managed to catch the grand opening of Spokane’s impressive new Pavillion before heading on to Missoula, Montana the next morning where all sort of adventure and vegan food awaited!