There’s nothing like immersing yourself in nature for a few days, away from highways and deadlines and cell phones and Facebook. We love heading outdoors and leaving the real world behind for a little while to recharge in a place where we’re surrounded by all the natural beauty Mother Nature has to offer.

Recently we escaped to Grand Canyon National Park where we planned to camp for a few days and then backpack into the canyon to camp for a few more. There would be sweaters and hot chocolate and plenty of Ramen and views so deep and wide a camera simply couldn’t capture them all.

I wasn’t enthused by the initial price of admission ($25) to the park, but I knew we’d be getting our money’s worth. You can also get a National Parks Pass if you’re planning on visiting more than three parks in a year. Not like most visitors who only stay for about 3-4 hours. For the record, you simply can’t appreciate the vast beauty of this place in 3-4 hours. No, our plan was to camp two nights on the rim, two nights in the canyon, then maybe one more on the rim depending on what time we hiked out.

It didn’t quite work out that way.

As soon as we arrived we headed to the Backcountry Office where we would claim our spot in line for camping permits down in the canyon. We should have planned farther in advance so we could have gotten the exact days and campsites we wanted, but we didn’t know until a week or two beforehand that you have to schedule that at least a month or two in advance. Our bad. Of course, you can still reserve a spot, it just takes more time and you might have to wait.

We were number 7 in line. The ranger said that didn’t look promising but that most hopeful hikers were waiting about two days for a permit assignment. So we came back the next morning as soon as the office opened and were reassigned a number 1. Woo hoo! That meant we had first pick the next day for whatever campsites we wanted. It didn’t however, mean we could start the day we were awarded our permit, which meant we’d be spending one more night on the rim than we initially anticipated. No matter. We weren’t on a tight schedule and could probably use the extra day to get acclimated to the high altitude and finish getting over my stubborn cold. Oh, and we’d have to pick up more Ramen for dinner…

Meanwhile, we had to buy a couple extra sleeping bag liners at the general store because neither of us had thought to check the weather before we arrived from Phoenix (where it was in the upper 90’s) and it was cold! It only got into the lower 60’s during the day and the upper 30’s at night. Cold. Especially for people who have lived in South Florida for two years and spent the last two weeks in Phoenix. We had to sleep in the car for the first night because it was so cold.

So you can imagine my delight to find out that while it was practically hyperborean on the rim, it was in the 80’s at the bottom of the canyon. I did a happy dance right there in the middle of the Backcountry Office.

As we traded our magical number “1” in for our choice in campsites (Bright Angel campground the first night, Indian Garden campground the second), we went over what we still needed before we headed down. More trail mix? More Ramen? Probably. We had eaten the extra packs we had brought already since we opted to cook our meals at the campsite instead of going to one of the park’s many restaurants. This was a Terradrift trip, after all.

And before you get too, “Eww, you ate Ramen for five days?” let me assure you that even the most unhealthy processed foods taste delicious and provide much needed nutrients when you’re camping. Of course, we tossed those nasty sodium packets and added some dried veggies, TVP and veggie broth to make them a little more filling and nutrient dense. They were scarfed in silence every night.

During our three days atop the canyon we walked the rim trails, attended Ranger Talks, and enjoyed the sunset from Yaki Point where you could also see the endless switchbacks of the South Kaibab Trail that we would be starting out on the following morning. It would be quite a trek down, so we determined to start early.

But not too early. Our goal was to be at the trailhead by 8:00. So naturally we were there at 8:30. I didn’t even get stressed about it. Good for me. Although I did realize until we got on the shuttle that would take us to the trailhead that I had forgotten my trekking pole (singular; it’s mate was broken). In fact, I hadn’t even seen it when I rifled through the entire trunk while looking for my second hiking shirt (I didn’t find that, either). However, both of those items did show up (in the trunk) when we returned to Phoenix. No matter. I obviously made it without them.

There were many times I wished I had that stupid trekking pole, though. In fact, at least once or twice Josh and I both considered beating up a day hiker and stealing theirs. We didn’t, so calm down, but we really wanted to. Plus, the day hikers were mostly rude anyway, so who cares?

The first day’s hike was 7 miles on the South Kaibab Trail and it was all downhill. The whole way. All 4,780 feet of elevation drop. And let me tell you, the uphill climb gets the bad rap, but downhill’s no picnic, either. In fact, that’s what killed us. Our calves and knees and feet were so sore by the time we arrived at Bright Angel Campground that we were worried we wouldn’t be able to get out of the tent in the morning. The prognostication wasn’t far off.

But the Bright Angel Creek that flowed past the campground was clear and cold and refreshing and went a long way toward rejuvenating tired joints and muscles and feet. We wasted no time getting in after dropping our packs at a site.

It was beautiful down there. The red and brown landscape that had been our surroundings all the way down had given way to lush green and sparkling water after we crossed the Colorado River and I found myself feeling just a tad jealous of the park rangers who were assigned to stay in the cabins by the stream this week or day or however long their shift in the canyon was.

That first day we hiked five hours and arrived at 1:30 with plenty of time to set up camp and attend the two Ranger Talks that were held at Phantom Ranch that day. We actually learned quite a bit about geology and the history of Phantom Ranch. Did you know that before the dam was built North of the park the percentage of water in the Colorado River was only 48%? The rest was sediment. How crazy is that? Now the river is greenish-blue more often than red, as it’s nickname suggests (the Red River), but during times of heavy rain it turns that dark rust color again. 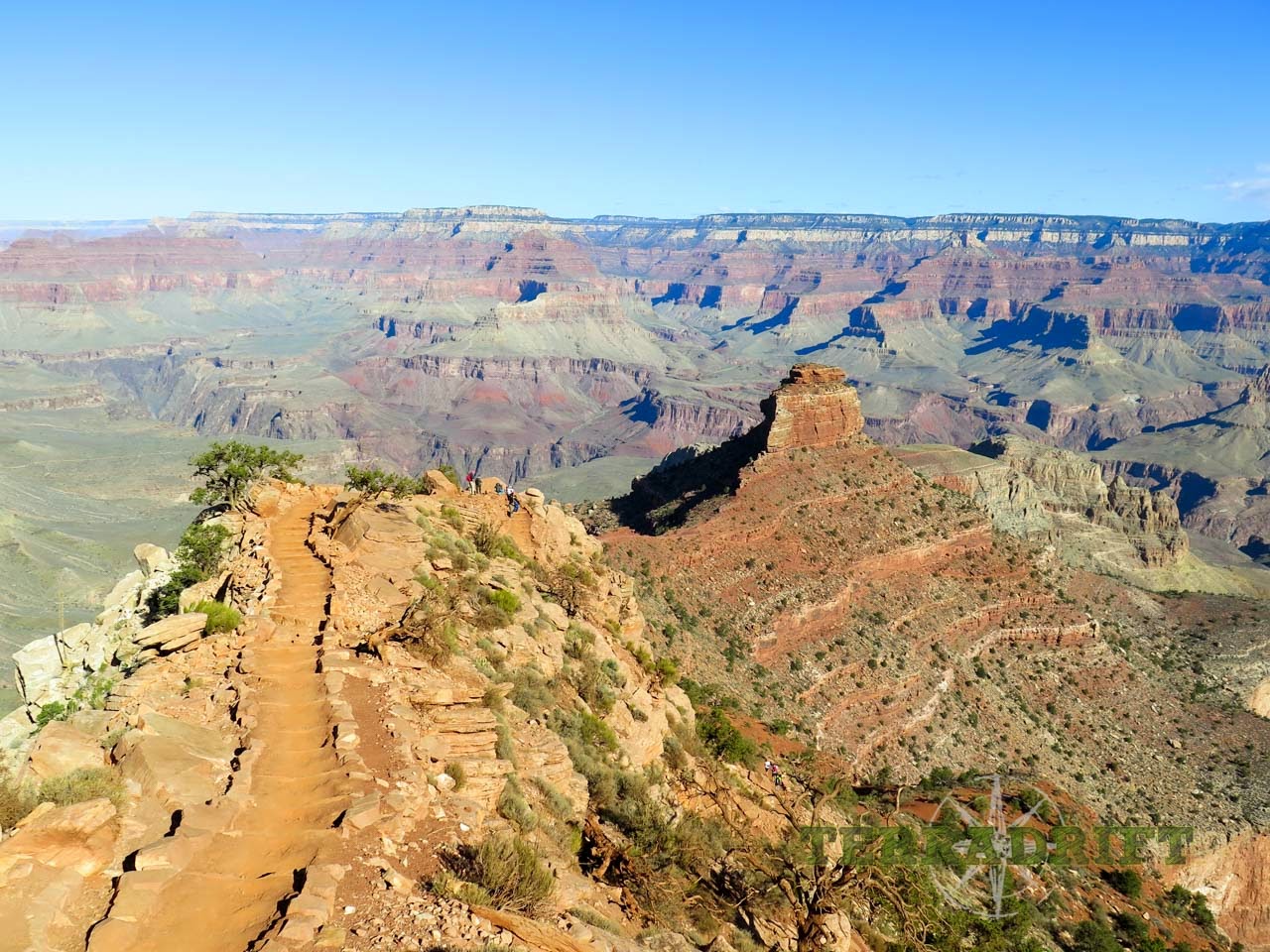 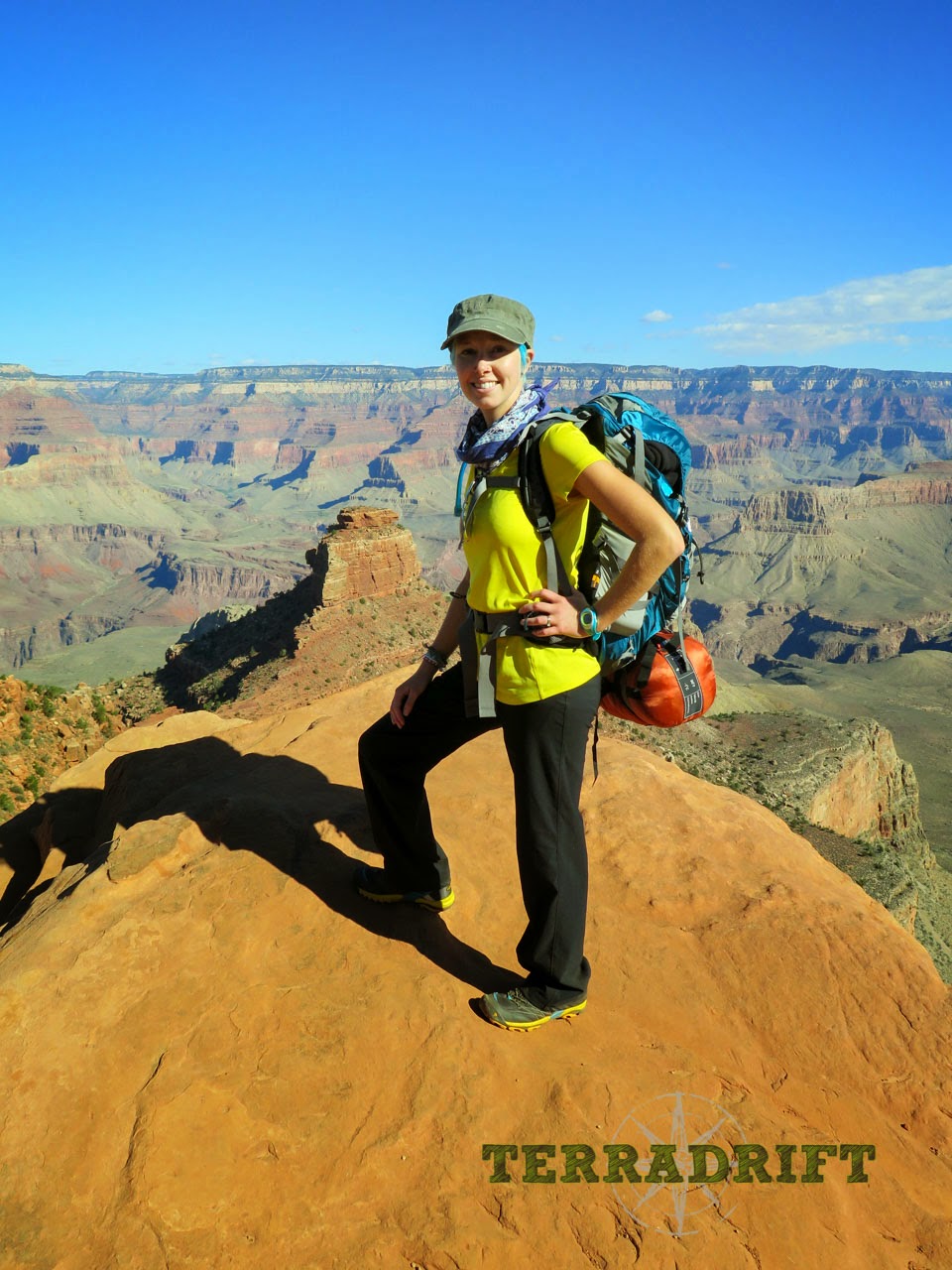 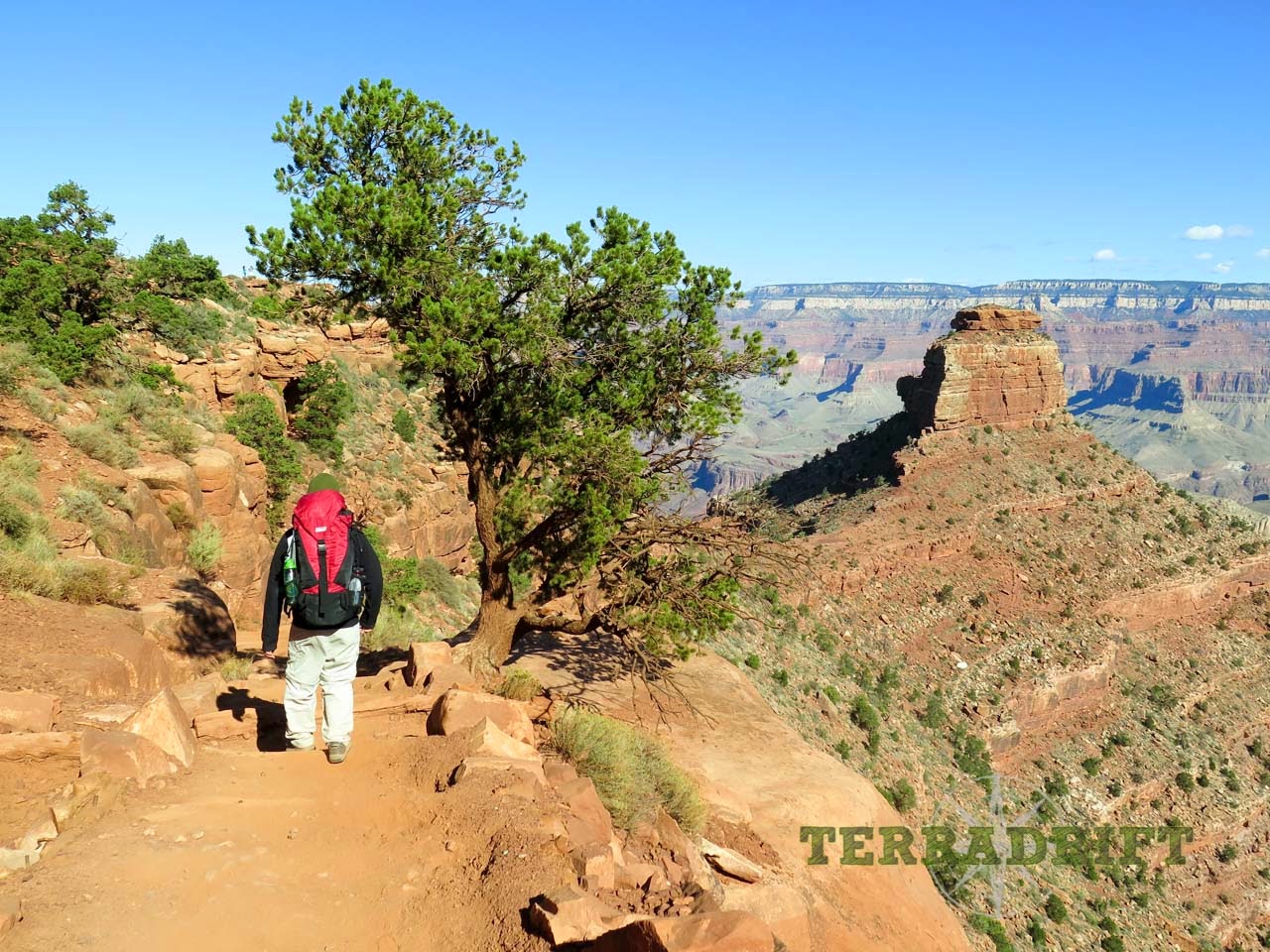 Our second day of hiking was only 4.9 miles, but it would be mostly uphill as we climbed 1,320 feet in elevation. We had a hearty breakfast of oatmeal and coffee and dried fruit and nuts and headed out at 9:00 since we weren’t in a hurry. The hike was beautiful, following and crossing the creek intermittently throughout the day, creating swatches of green in the desert landscape and offering a place to rest. For lunch (homemade energy bars and more trail mix and dried fruit) we took off our shoes and rested in a small creek and I took the opportunity to dunk my hat and neck scarf in the cold water. Sooo refreshing! Still we arrived at the Indian Garden Campground (aptly named for it’s tall grasses and leafy trees) around 1:00 after a four-hour hike. We had plenty of daylight left so we hiked out to Plateau Point (sans packs after we set up camp). It was only another 1.5 miles of flat trails so we thought why not.

It was a little colder that night, so the sweaters came out, and our calf muscles were definitely stiffer than was preferred (that walk to the bathrooms on the top of the hill was rough, let me tell you), but once again it was beautiful and the welcome center cabin had books campers could borrow. So we took turns reading the first few Chapters of “Game of Thrones” to each other in the tent before we fell asleep.

We started out early again the third morning, rising around dawn and heading out around 7:30 in hopes of reaching the top by lunchtime so we could make it back to Phoenix by dinner. We took frequent breaks, knowing we had 3,060 feet of elevation to climb over a 5 mile hike. We snacked often, too, having a bar or trail mix or dried fruit at least every 3/4 mile or so. It was rough going for a while as we zig-zaged back and forth on more switchbacks than I attempted to count. We did see more and more day hikers the closer we got to the top (which also meant more and more people not returning our smiles of greeting. What’s with day hikers, anyway?). We took our last exhausted step about 11:30 and rejoiced with a high-five, a picture by the Bright Angel Trail Head sign, and a congratulatory “well done” to a woman that we spent the last two days playing leap frog with on the trail.

Unfortunately, no other visitors heralded our success with cheers of congratulations as I thought they should, but I suppose we knew the depth of what we had just accomplished and that was enough. That, and a buckwheat pancake, omelet and hashbrown breakfast in Flagstaff on our way back to Phoenix. Yum. No more camp food.

Yes, our calves still seized up if we were inactive for more than three minutes (you should have seen us hobbling off the shuttle bus!). Yes we ate freeze-dried vegetables out of zip top bags every night. Yes we carried everything we needed to survive for three days on our backs. And it was completely and totally amazing. And we would do it again in a heartbeat (rim to rim next time?)

Items I wish I had brought with me:

Items I brought with me that I’m glad I didn’t forget:

Ever been down in the canyon? Share your amazing experience!