When I booked a last-minute ticket to Guatemala on a whim with less than 24 hours before departing for the airport, I felt a lot of things: anxiety, excitement, guilt…For leaving Josh at home to work while I went galavanting, of course. One thing I didn’t feel was underprepared. I’ve spent years collecting the right gear, clothing, and supplies so that if and when an opportunity like this does arise, I won’t be stuck scrambling to 15 different stores trying to find the perfect shirt or snack bars or shoes or packs. But what I didn’t know was that I wasn’t prepared at all. Not for hiking Acatenango in Guatemala.

First of all, I’m in good shape, all right? I’m at the gym three days a week picking heavy things up and putting them down again, road cycling, hiking, and generally being active. The only thing I am fully aware that I have no business doing is running a 10K. Maybe a 5K, but if we’re being honest, that’s gonna be a struggle, too. Chalk it up to never doing any real cardio or interval training. Oh well. I’ll work on that.

But tough hikes? Those I can do. I mean, I’ve backpacked in the Grand Canyon twice. Once rim-to-rim in the middle of June! You might think I have a bit of a masochistic streak or something. However, hiking Acatenango is by far the toughest hike I have ever done.

Luckily for you, I’m willing to share my struggle and hypothesis about the trek so that you have the chance to do it better. Aren’t I nice? 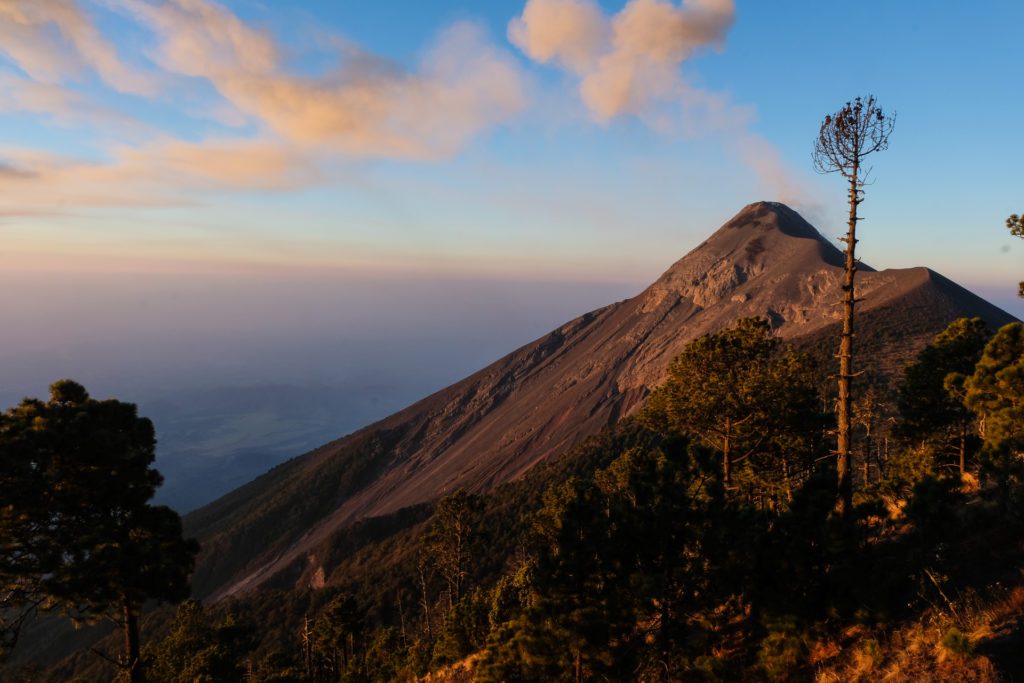 A morning view of Fuego from Acatenango

First of all, don’t let your guide tell you that the first two hours of the hike are the hardest. That’s a bunch of nonsense. The entire hike is the hardest. I don’t appreciate being given false expectations in the guise of keeping me positive. It messes with my flow, man. So you can imagine my disappointment when we had been hiking for about two hours, we stopped for lunch, and the guide said it was still 1-2 hours of climbing before the trail leveled out a bit. WTF?!

This was a problem for two reasons. One: my expectations were now painfully drowning in a sea of reality. Not cool. Two: I had a full lunchbox of food that I desperately needed to eat but now realized I shouldn’t because my body doesn’t like it when I cram it full of calories and heavy carbs and then push it to its limit on a hard vertical hike. That’s a recipe for vomity-ness, right there.

Truth be told, the first hour or two could reasonably be categorized as tougher due to the fact that the trail is basically rocky sand. It means your feet have no purchase whatsoever and it’s like hiking up a sand dune; your feet just sink into the earth and the earth offers nothing in return to push off of. Every step takes way more energy. After a certain point, the sandy gravel turns to slightly more packed dirt, which is marginally better, but the steepness of the grade and the loose dirt underfoot mean your feet are going to start sliding out from underneath you if you’re not careful. Every step has to be measured and precise. 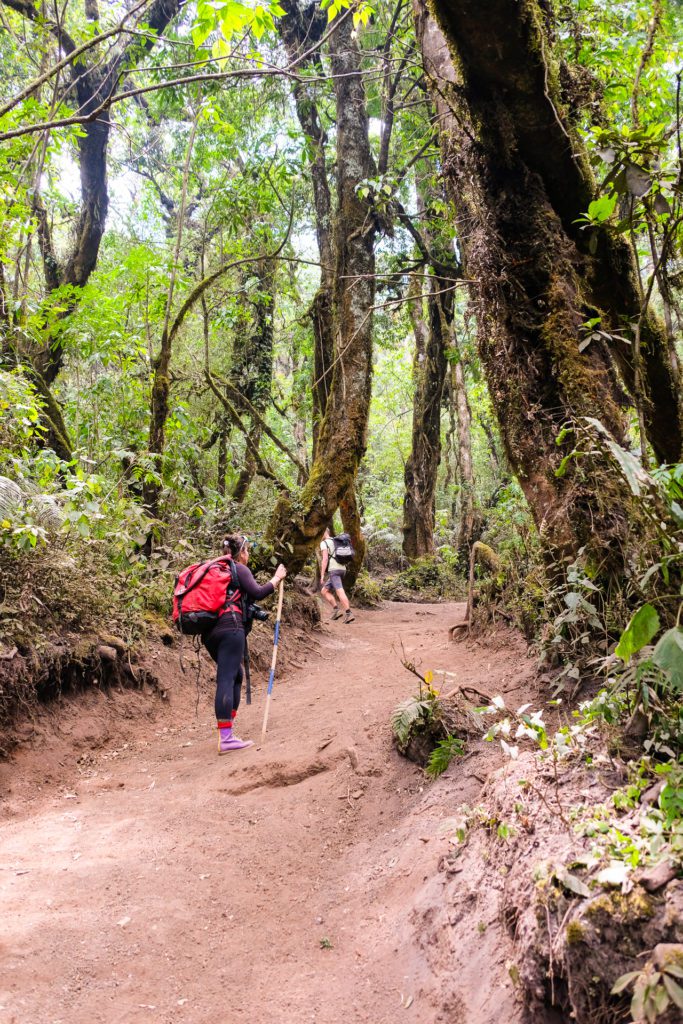 A tough but beautiful hike

The Gripe About Gear

The next issue you’ll come across is that of gear. I can’t tell you how much I wished I would have known I was going to do this hike before leaving for Guatemala. If I had planned for it, I would have brought all my own gear and prepared my own meals. I would have had my good backpacking pack, some freeze-dried meals, enough water for the trip, my trekking poles, and warm outer layers for the overnight. Paying to check a bag with all of it would have been worth it.

Unfortunately, I didn’t know hiking Acatenango would be on the schedule. So I had my good daypack and decent clothing, but that was all. It wasn’t enough. Since we didn’t bring our own gear, we paid for a tour that offered “everything we needed” plus a guide to lead 6 of us up the volcano. It was $40 USD (350 quetzales), a steal. But “everything we needed” turned out to be second-hand non-active coats (I had a giant, heavy, puffy parky strapped to the outside of my pack the whole hike), breakfast, lunch, and dinner packed into oversized Tupperware-style containers and placed in a large square lunchbox, a headlamp, gloves, hat, and a Camelback in its own bag. We also all rented walking sticks at the trailhead for 5 Quetzales (about .75 cents) a piece. 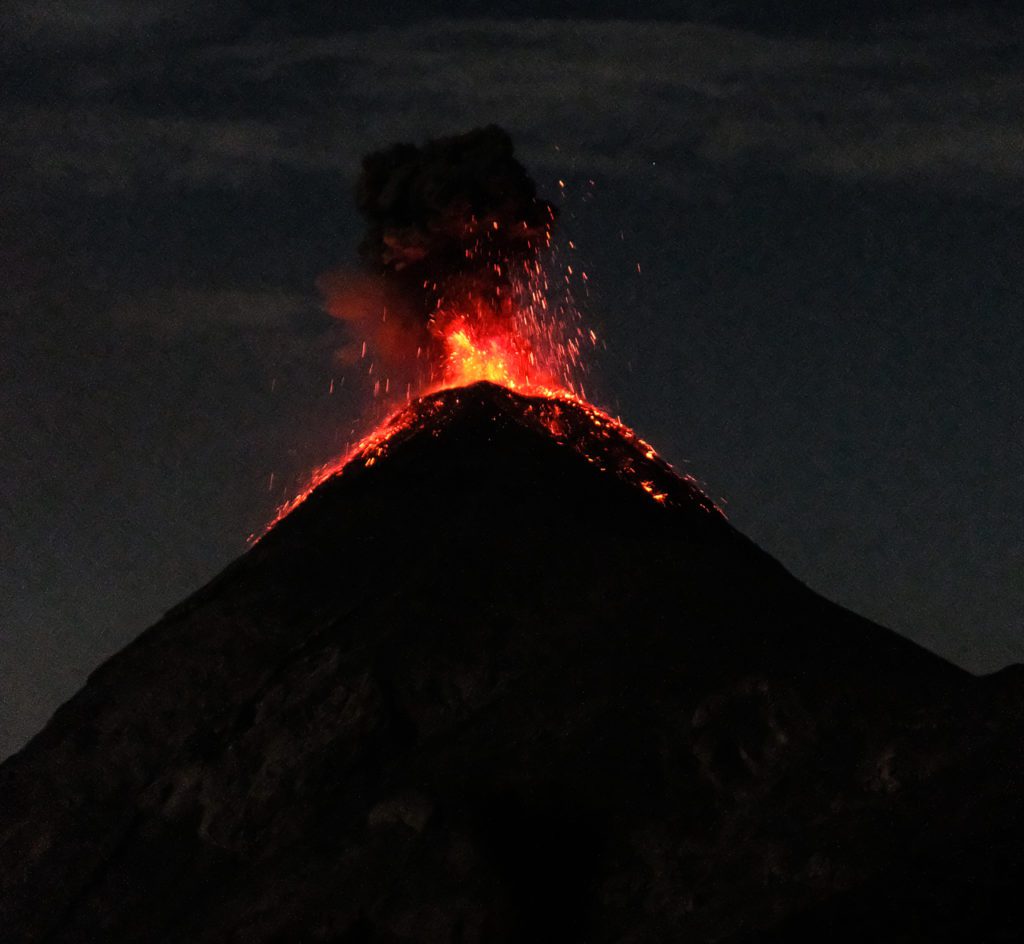 Fuego erupts frequently–you can only see smoke during the day, but at night…Lava!

I couldn’t fit most of it into my daypack that was already full of a camera, snack bars, extra layers, and my own water bottles, so everything got lashed to the outside. Which, if you’ve ever been hiking with a load like this before, you know how miserable it is with everything swinging around behind you, pulling you backward, throwing off your balance…

It didn’t help that the food the company provided weighed a ton. What you get will depend on the guide company you go with, but ours sent us up with cooked rice and pasta, among other things (they didn’t even bat an eyelash when I asked about vegan options–too easy). And non-vegetarians each had what looked like half a BBQed chicken. Those are very heavy items. It was, however, plenty of food. Not one of us was going hungry. In fact, we had so much food that we were pawning it off on the hikers among us who could put away more calories just so we didn’t have to hike back down with it!

Long story short, I would have much rather come prepared with my own gear (pack, clothing, water, trekking poles) and lighter, freeze-dried food (I’m talking to you, Ramen!), but considering I didn’t know I’d be hiking Acatenango until I was already in the country, that wasn’t really an option. And there was plenty of food for vegans an non-vegan alike. 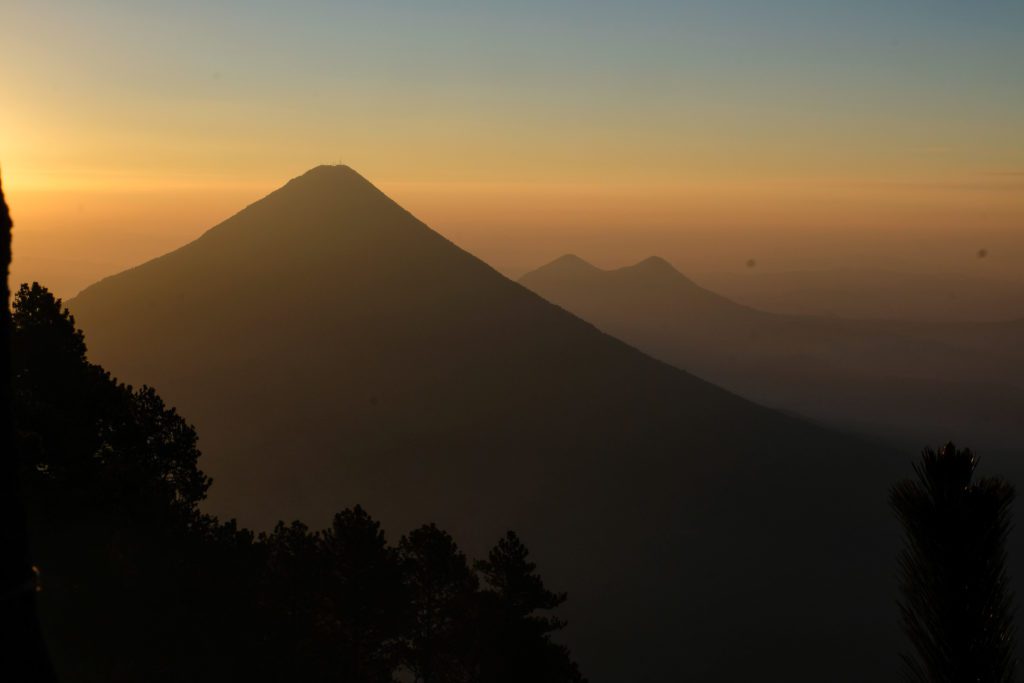 Tents, air mattresses, a covered fire pit, sleeping bags, and pillows were already set up by the time we arrived at camp. I felt bad for the guides who had to carry all that crap up! Meal prep items like pots and pans and jars of jam and pasta sauce were already up there, too, ready to be prepped by the guide that did all of our cooking. He also lit the campfire right away, which is where the entire crew gathered, shared and laughed all evening and all morning. The non-vegans also roasted marshmallows, so if you don’t want to feel left out, pack yourself a couple of Dandies for the trail! We slept two to a tent and I have to say it was a pretty comfy setup. A lot comfier than my usual backpacking sleep system, anyway. 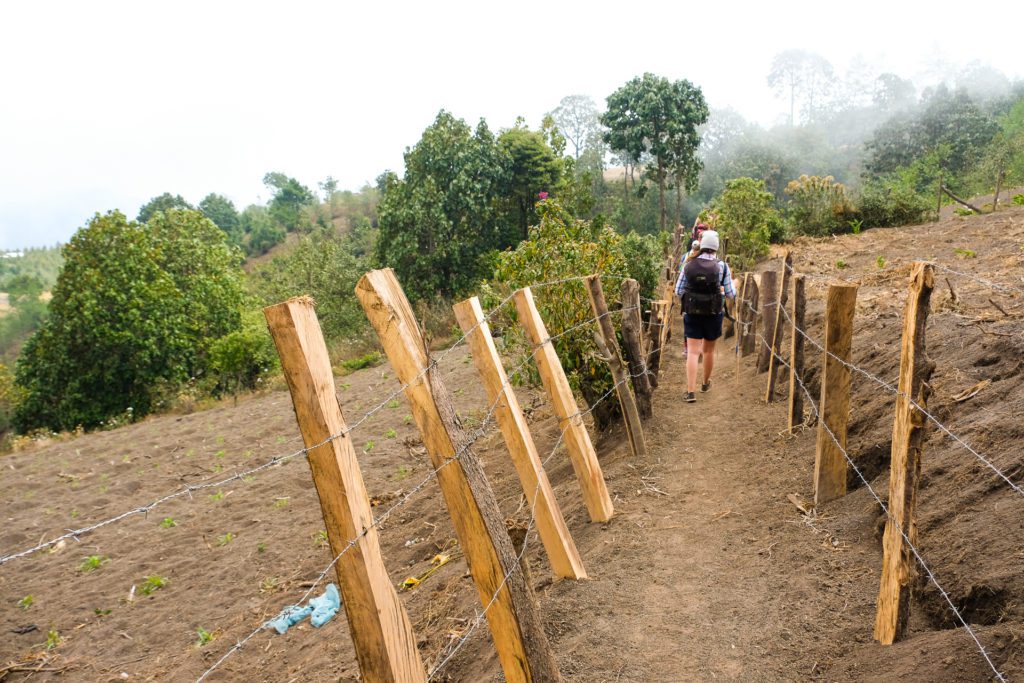 Hiking through the clouds

The last mistake I made was to not show up fully prepared. All I had consumed for breakfast was a Luna bar and a banana (not enough calories to start a hike like this) and the guide had us moving from the hostel onto the shuttle to the house the gear was in then back on the shuttle then to the trailhead then up the volcano so quickly I barely had time to take photos, let alone take time to carefully repack my bag or have a few bites to eat. Couple that with eating very little during the hike itself, and you’re going to be expending far more energy than your body has to give. So before hiking Acatenango, fuel your body right.

Where to Find Guided Trips to Acatenango

The hostel we stayed at in Antigua had a booth operated by CA Travelers, the guide company we went with. They were super friendly and helpful. Other hostels were home to similar set-ups where you could ask questions, book tours and shuttles, and get recommendations. There are also tour offices scattered around Antigua (and likely Guatemala City if you’re staying there). Most of the employees speak excellent English, though the actual guide that leads you up the mountain and prepares dinner and breakfast for you may not be as fluent. 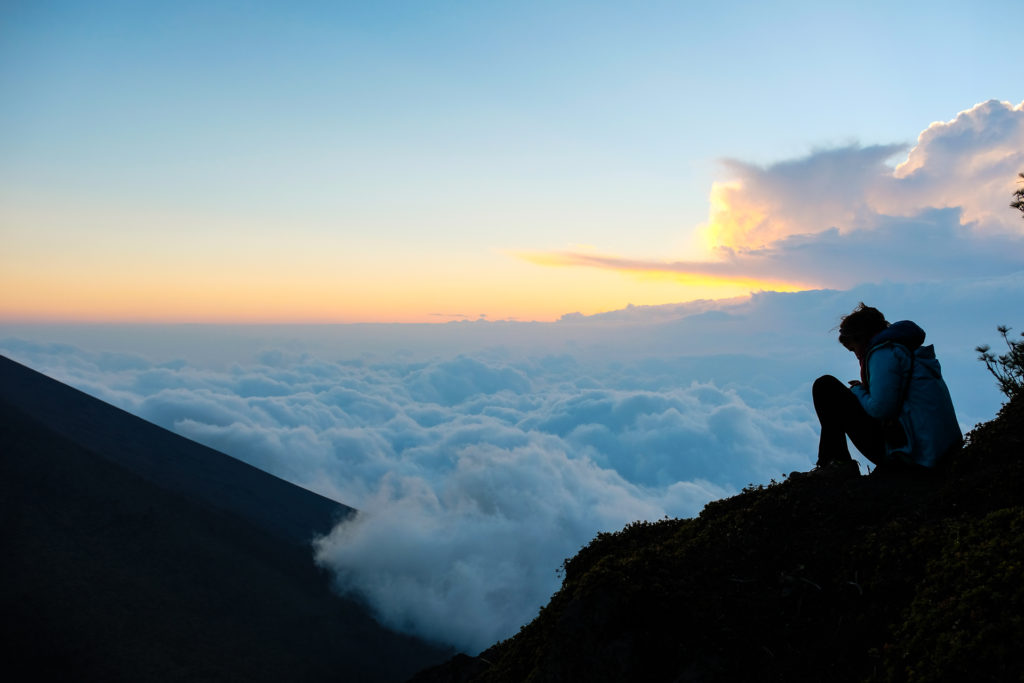 If my account has weakened your resolve, ignore me. Yeah, the hike is a tough one, but you should absolutely still do it. The view from the top is spectacular and no matter how sore your calves are the next day, you will never regret admiring sunrise and sunset from above the clouds on Acatenango. It’s a surreal, ethereal place that will forever hold magic for me, and no matter how loudly I declared I would never do this hike again while I was in the thick of it, now that there’s some time and distance between me and it, I’m already shrugging and thinking, aw,  I could go back. Besides, Josh didn’t get to experience the magic, and how is that fair?