We’ve heard a lot of people lately touting the relative merits of hammock camping, so we decided to try it out for ourselves. It helped that I recently wrote an article for popsci.com about hammock camping, so I learned all about the scientific benefits and couldn’t wait to see if it was all it was cracked up to be. Enter Kammok, our hometown hammock makers. They make an all-in-one hammock camping system called the Mantis that contains everything you need for a night under the stars (in warm weather, anyway). So we snagged us one, strapped it up, and went to bed. Here’s what we thought. 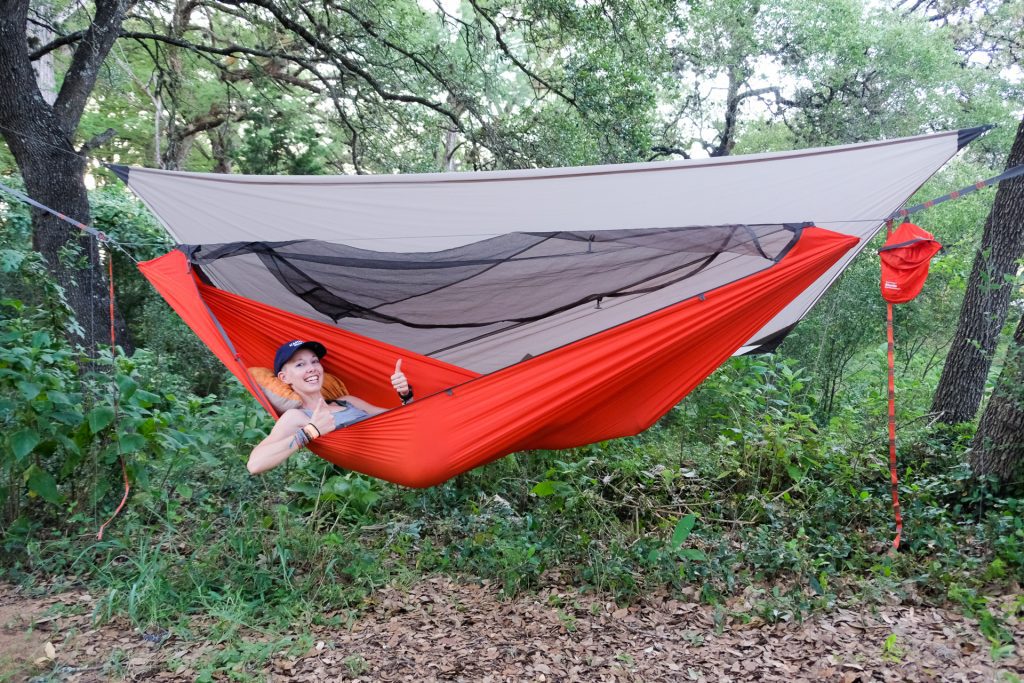 Guy lines that pull the fly taught and stake out the “wings” (stuff pockets in the mesh bug net) are included, too. 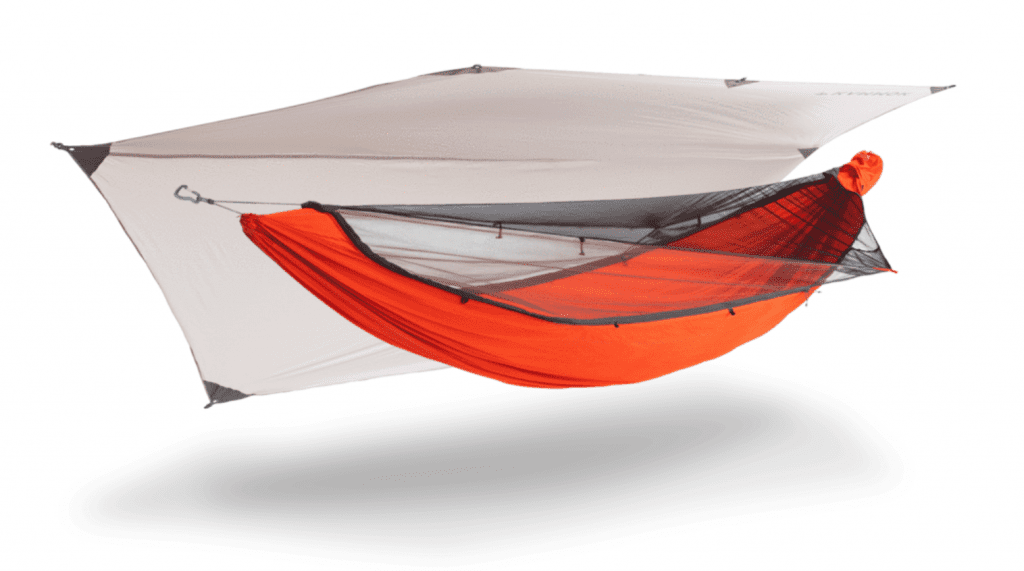 Here’s how you do it: Wrap those handy Python straps around two trees at head height. The trunks should be between 12-18 feet apart, though the built-in loops in the variable width straps (1.5″ around the tree where it counts, 3/4″ at the loops where it doesn’t) make hanging it between trees all kinds of distances apart a possibility. There’s a ridgeline built-in, so you can always hang the Mantis with the perfect amount of sag. 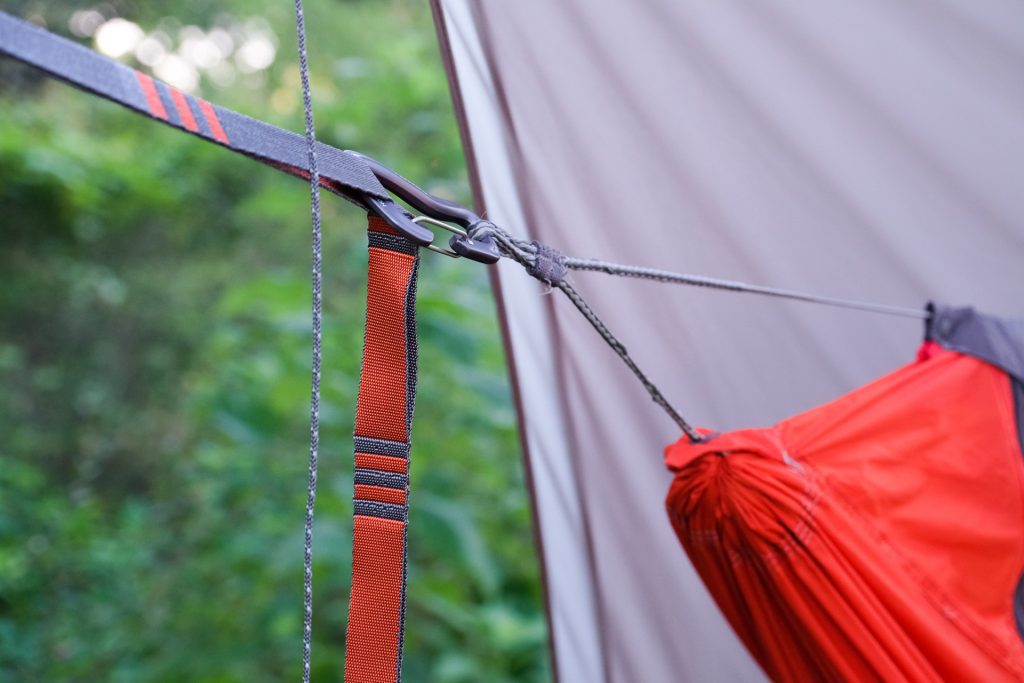 The Python straps and loops.

The bug net is attached via zipper, so if there are no pests to be found or you just want to swing for an afternoon with friends, zip it right off! And if you need to keep the sun or rain off, mount the fly above the straps on the same tree trunks and stay shady and dry all night long. As for the guy lines, they all have built-in line locks for super easy tightening.

There are also gear loops all over the dang place so you can add stash pockets, pillows, hang an underquilt, you name it. Kammok really thought this out so you can fully customize your hammock camping experience. It’s especially nice since carrying a separate bug net, hammock, straps, fly, and lines can get real big and real heavy real fast. 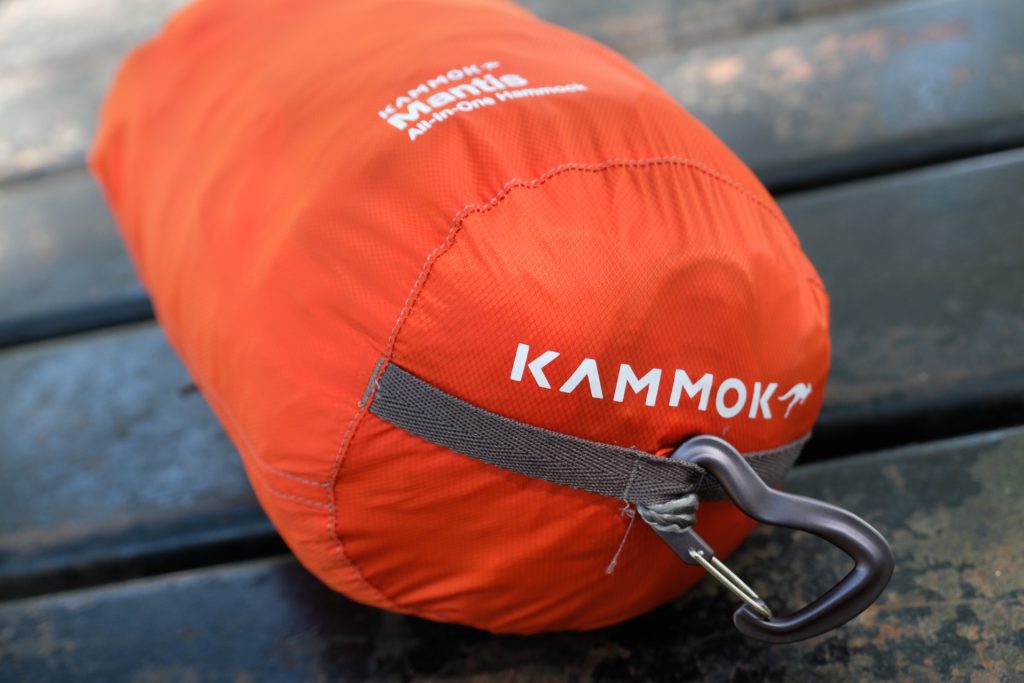 Heck yeah, it is. I slept better in the Kammok Mantis than I normally do in a tent, though I did wake up a time or two in the wee hours. The first night because it was colder than I had anticipated and I was suffering from serious cold butt syndrome. It’s summer! I didn’t know it was going to drop to 70 degrees! But I could have remedied it by wearing socks, more than a tank top and shorts, and maybe a sleeping bag slightly warmer than my thin fleece blanket.

But I tossed and turned significantly less than I do in a tent; my hips, knees, and shoulders weren’t sore, and I didn’t even need an inflatable sleep pad. Because it was warm, I left the fly off (the better to see the stars, my dear…), but the bug net stayed on. It is Texas, after all. 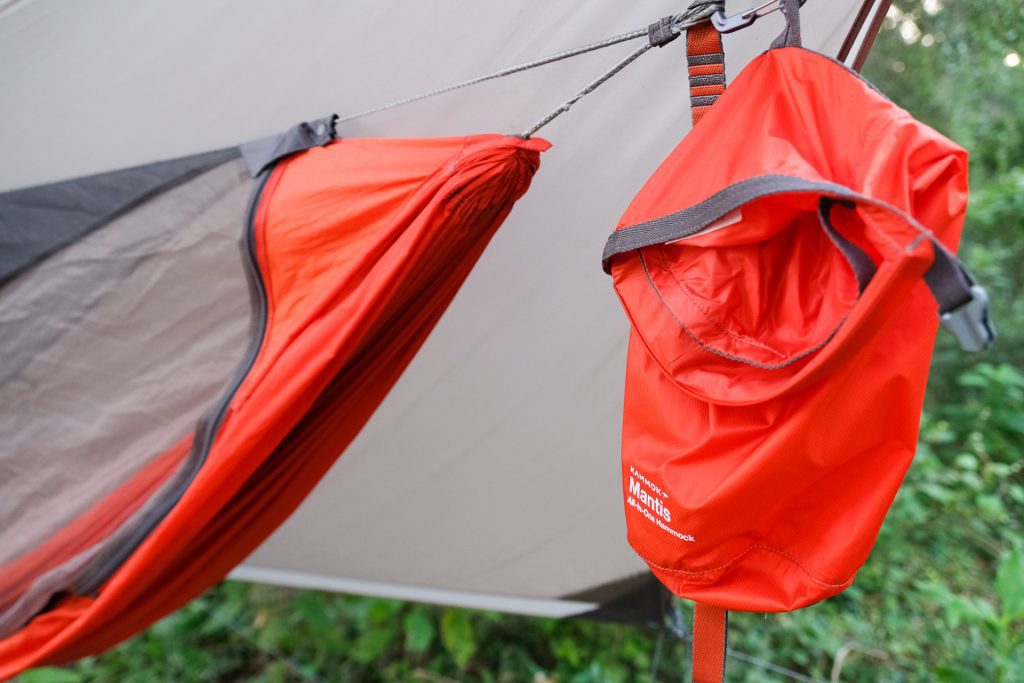 You can clip gear (or stuff sacks) to the setup.

I slept diagonally in order to take advantage of a flatter sleeping position and my fluffy Thermarest pillow was the perfect size. It was lovely. The only thing I wasn’t a superfan of were those wings. And that’s just because I didn’t stake them out far enough. Since I didn’t, the book, headlamp, and phone I tried to stuff in there fell a little close to my face and shoulder when I would move around or turn over. Also, since you’re essentially staking the hammock when you use the wings (albeit with shock cord), you’re also securing the hammock from swaying. That could certainly be a good thing in some situations, but personally, I like a little sway in my hammock.

And when it’s time to turn in, that ridgeline is super handy for strapping lanterns so you can read! BTW: reading yourself to sleep in a hammock? Soooo much more comfortable than in a tent! 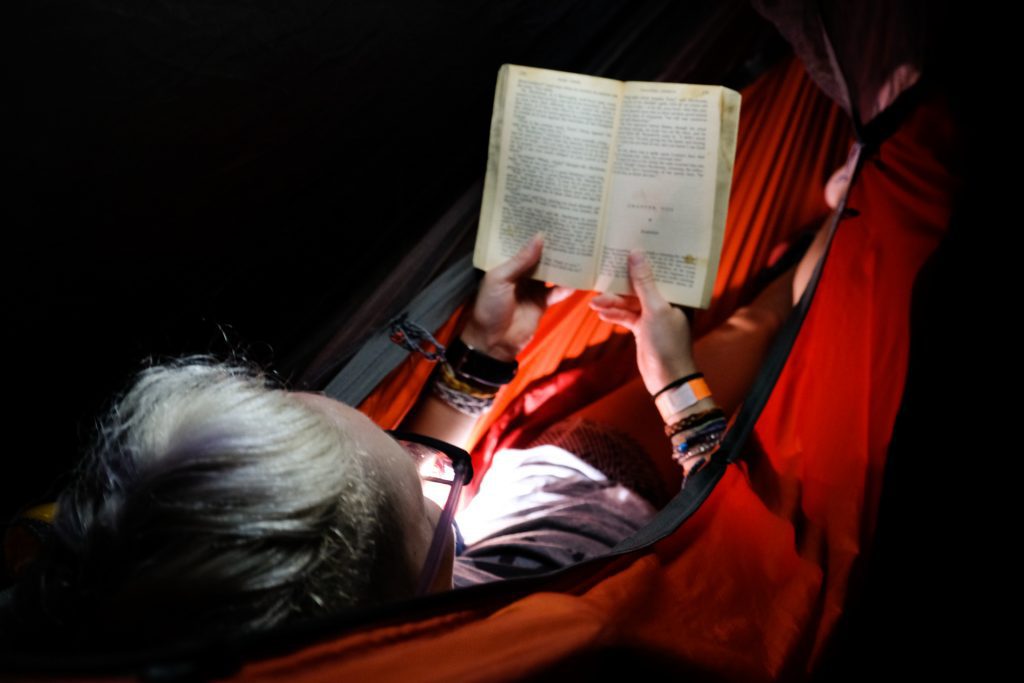 Reading in the Kammok Mantis.

Hammock Camping FTW: Will I be Ditching my Tent?

Basically, I’m now obsessed with hammock camping. But that doesn’t mean we’re tossing our tent. See, hammock camping for one makes perfect sense because a hammock system weighs–and costs–about as much as an average one-person tent. But for two people, it’s actually heavier and often more expensive, especially if you’re hammock camping in cooler weather when you have to carry a sleep pad to insulate your underside, plus an underquilt to prevent convective heat loss from below, plus a warm synthetic sleeping bag. And as a tiny person who gets very cold very easily, hammock camping in the winter may never be for me. I’d wake up a popsicle!

There’s also the weight to consider when deciding between a tent and hammock. Our tent (the Big Agnes Tiger Wall UL2) weighs 2.5 pounds, so if we each carry part of it, that’s only a little over a pound each. And our lightweight Klymit sleep pads don’t add much more weight. As for price, The tent (new) costs $400, the Mantis $229 (there’s also an ultralight version for $259), so it’s comparable. But don’t forget to factor in all the peripherals if you’re making a decision solely based on which is lighter or less expensive.

Cost and weight aside, the Mantis was certainly more comfortable. So I guess it’s a trade-off: is weight or comfort more important? For comfort, I’d go Mantis all the way. Time will tell if I’m now forever dissatisfied with tent camping when I backpack, but chances are, the Mantis has spoiled me when it comes to hammock camping. I’m already daydreaming about stringing it up again…

Want your own Kammok Mantis all-in-one hammock camping system? Get it here.

*This post contains affiliate links, which means if you make a purchase using one of these links, we might receive a small commission. Thanks for supporting quality content!

No. You may need slightly different gear, but hammock camping isn’t any more difficult than tent camping.

What gear do I need for hammock camping?

If you’re in a warm climate and don’t mind bugs, all you need to hammock camp is a hammock, straps, and sleeping gear like a bag and pillow. For cooler weather, use a sleeping pad and underquilt and a tarp and bug net to keep bugs and precipitation at bay.

Everyone is different, but generally speaking, sleeping on the ground, even with an inflatable sleeping pad, creates hot spots and pressure points, which are typically uncomfortable. While sleeping in a hammock may take a few nights to get used to, many find it more comfortable and restful.

That depends on both your hammock setup and your tent, but generally, an ultralight one-person tent will be fairly close in weight to a hammock camping setup, for one person, not including specific items like underquilts.