Ah, Portland! One of the United State’s Meccas of vegan eats and treats. We could go to Portland just to indulge in all the vast and unique vegan offerings. In fact, on our recent road trip down the entire West Coast, we pretty much did. So I guess I’m saying we’d go back just to eat. And eat. And eat some more. But when we visited, we did manage to leave dining establishments long enough to get some fresh air and see the city–by bike, of course. If you wanna do the same, here are our top 12 things to do in Portland on a self-guided bike tour!

First of all, you’re gonna need a bike. We recommend Cycle Portland for this–they’re right downtown and easily accessible. They’re also great if you want to book an actual tour where they’ll guide you around and tell you about the city, but we prefer to chart our own course (more time for eating), so we grabbed a pair of bikes and hit the streets.

Next, plot your course. Actually, you should probably do this before renting your bike so you know which bike to rent. Most of downtown Portland is fairly flat and accessible, but if you want to go farther afield or to Washinton Park, the sprawling green space in the city, you may want an E-bike. We made this mistake. We’re in pretty good shape, but the ride to and through the park is aaaaaaall uphill, and it is an exhausting slog. You’ve been warned. On to the top 12 things to do in Portland! 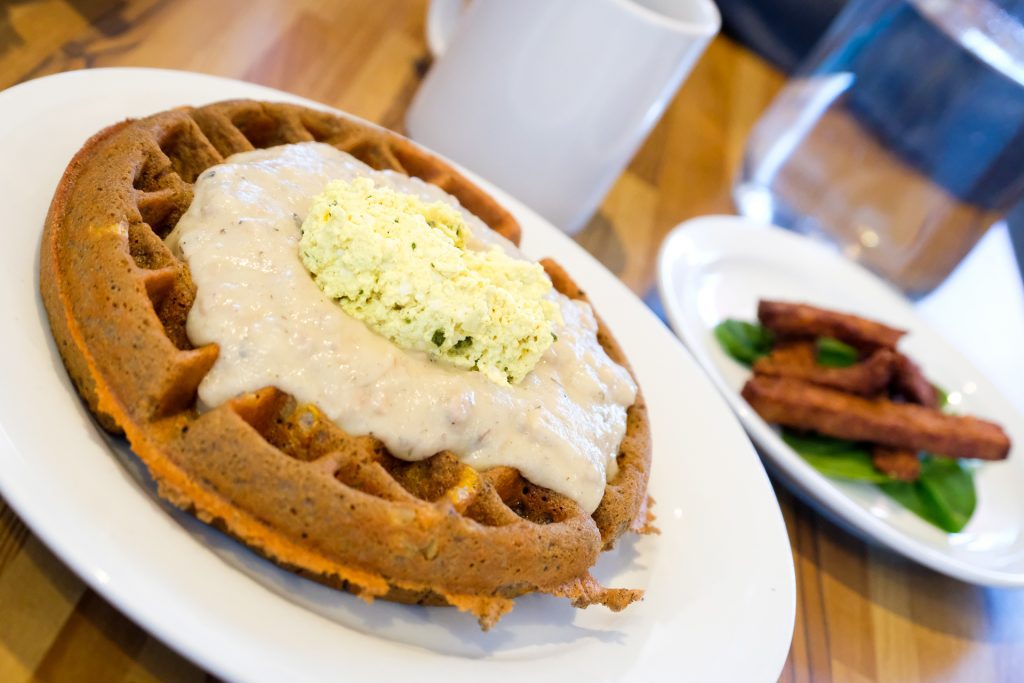 1. Breakfast at Off the Griddle

This vegetarian and vegan breakfast joint has all your favorite breakfast foods, including vegan sausage, potato and cheese-stuffed waffles covered in scramble and gravy. Yeah. Yeah. You’re gonna want to fuel up for the day’s ride at Off the Griddle. You won’t be disappointed.

The rose garden at Washington Park

If you’re feeling like a challenge, ride up to Washington Park. Take a rest and wander around the lovely rose gardens, check out the amphitheater, search for statues, and if you want to drop some $$, visit the Japanese Garden or the Portland Children’s Museum. so I guess a stop at the park could technically be several of the top 12 things to do in Portland… 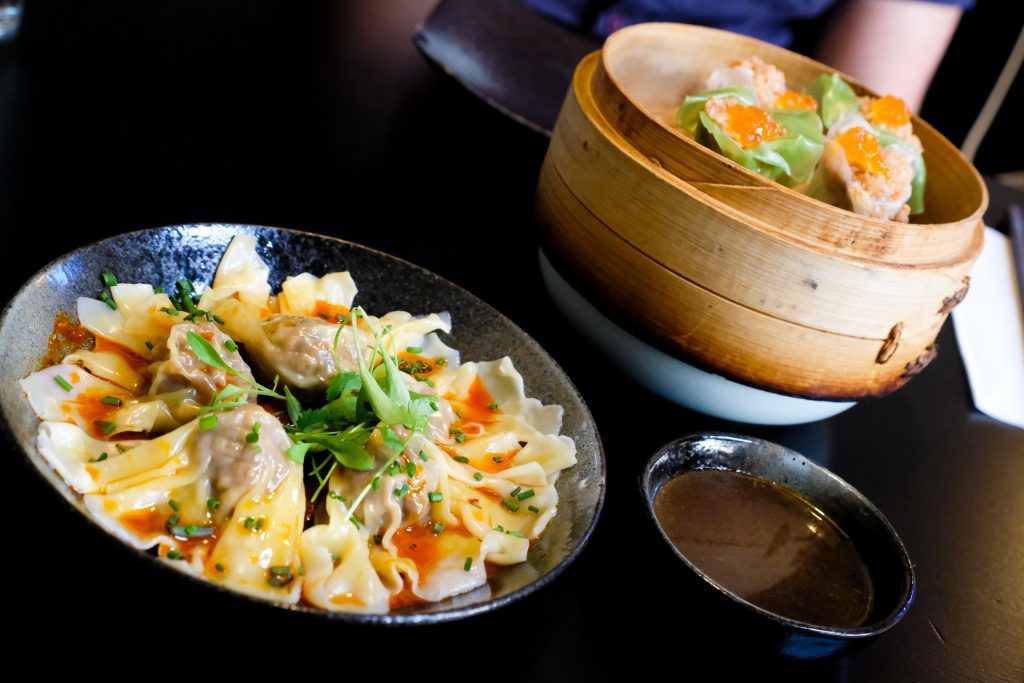 The food at Ichiza Kitchen is as delightful to look at as it is to eat and all the locals recommend it. This all-vegan pan-Asian restaurant is small, so maybe plan to come a little before or after regular “lunch hours,” especially on weekends as it gets suuuper busy, but definitely indulge in some noodles, dumplings and rare oolong teas. It’s not a budget dining option, but a light lunch might is all you need if you’re going to pop in next door for vegan cheese.

Chili mac and a grilled cheese at Vtopia

Yes, lunch and elevensies. Just do it. You really have no excuse since Vtopia is located in the same building as Ichiza. Just pop through their shared door and get a vegan grilled cheese, chili mac, you name it! If you filled up on potstickers, at least get a wedge of vegan cheese from the deli case! You can put that in your pack and have a snack later.

Like books? You’ll love Powell’s. It’s comprised of multiple winding floors, semi-floors and book-lined hallways where you could possibly get a bit lost but will definitely find at least half a dozen titles you need to take home with you. Even if you’re not a reader, there’s plenty of fun and quirky stuff to grab your attention. Definitely one of top 12 things to do in Portland, no matter who you ask.

Just get on your bikes and ride. Between Pioneer Courthouse Square, Portland original Voodoo Doughnut (with vegan varieties!), Stumptown coffee roasters (you’re gonna need a 3:00 pick-me-up), and Ground Kontrol retro arcade, there’s plenty to look at and keep you occupied, even if you’re just riding in circles and appreciating the architecture. 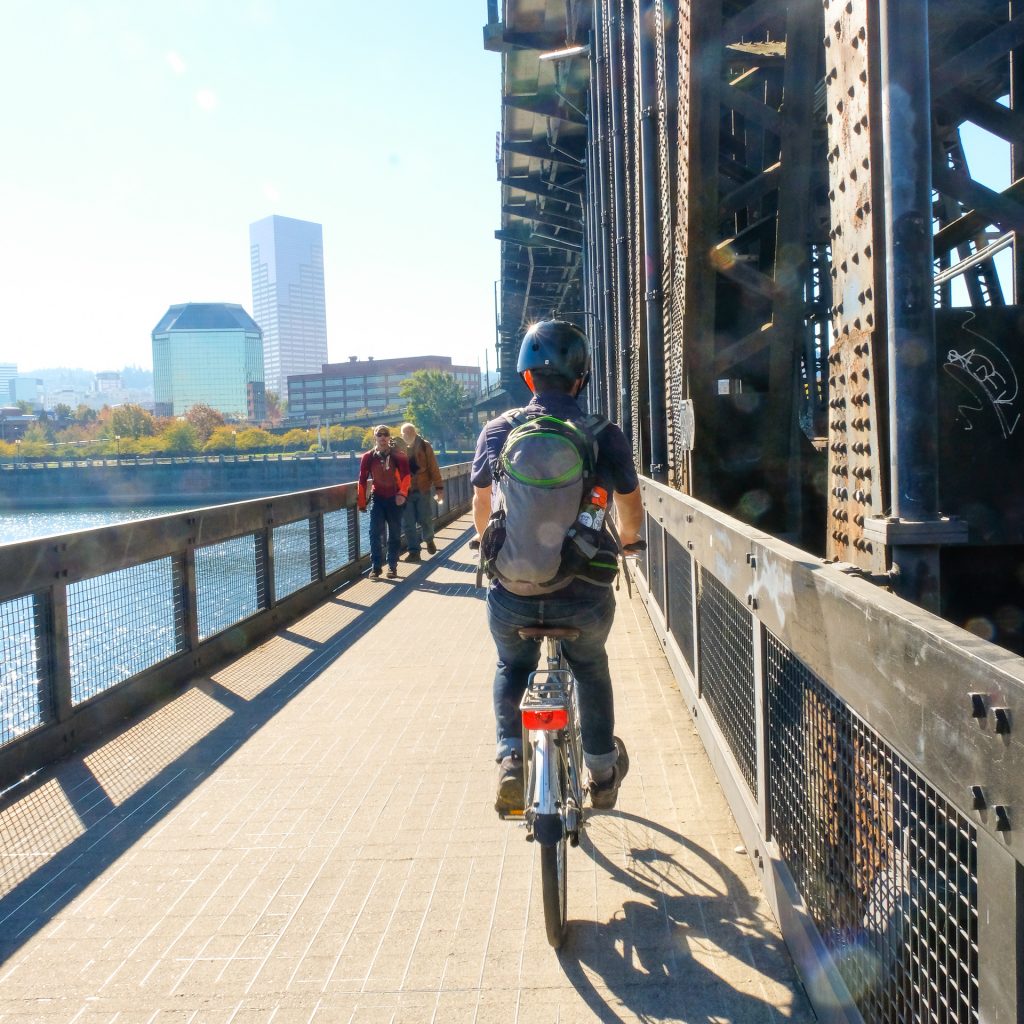 Riding across the Steel Bridge

Start at Tom McCall Waterfront Park (where the Portland Saturday Market–also open on Sundays–is located), and ride across the Steel Bridge, down the Eastbank Esplanade, and back across the SW Hawthorn Bridge or the pedestrian- and mass transit-only bridge, Tilikum Crossing Bridge, and back up to the park. Naturally, you can go farther if you like, (to numbers 8 and 9 below, for example) but this will offer views of both sides of the city from right on the water. When you’re done, return your bikes, cause the remaining stops are a bit of a haul if you didn’t get the electric versions. 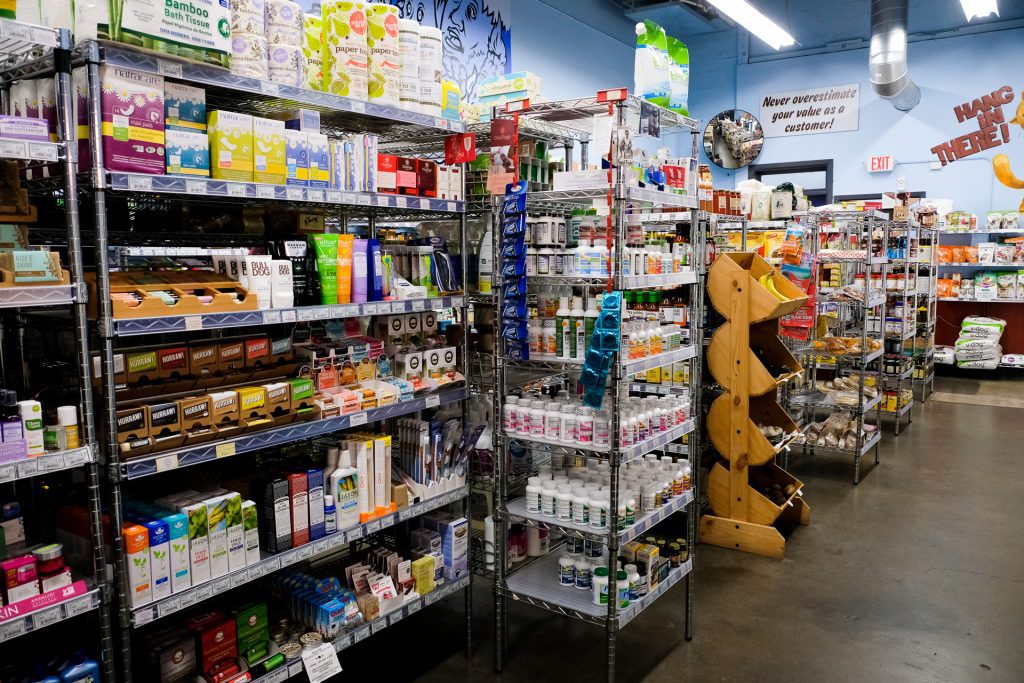 A vegan grocery store (Food Fight!) next door to a vegan retail shop (Herbivore Clothing Company)?! What more could you ask for? I know: a vegan bake shop. Sweet Pea Bakeshop is also on the same block and offers cupcakes and other sweets. So stock up on staples like vegan jerky, cookies, and meal staples, then snag a new pair of vegan boots or a vegan leather belt and reward yourself for supporting local businesses with a cupcake. Sorted. 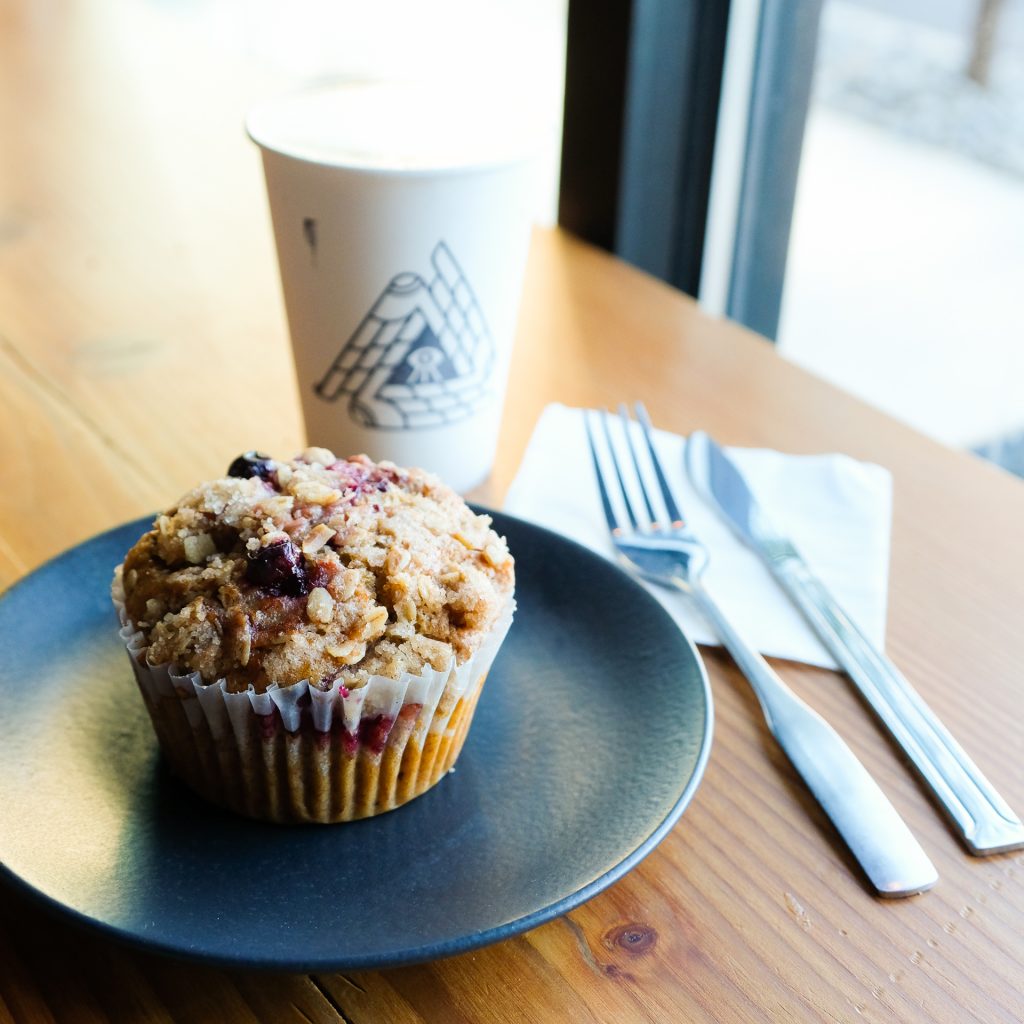 Coffee and a muffin at Oracle Coffee in Portland, Oregon

Why go to a conventional coffee shop when you can go to an all-vegan coffee shop? Oracle Coffee Company is that shop. But shhh! You won’t see it advertised boldly all over the place. Just know that all the milks and baked goods (mmmm, muffins…) are all vegan-friendly. They know how to make a latte, too, so order with confidence that your oat milk won’t get burned and you won’t get up-charged for requesting almond milk in your capp. 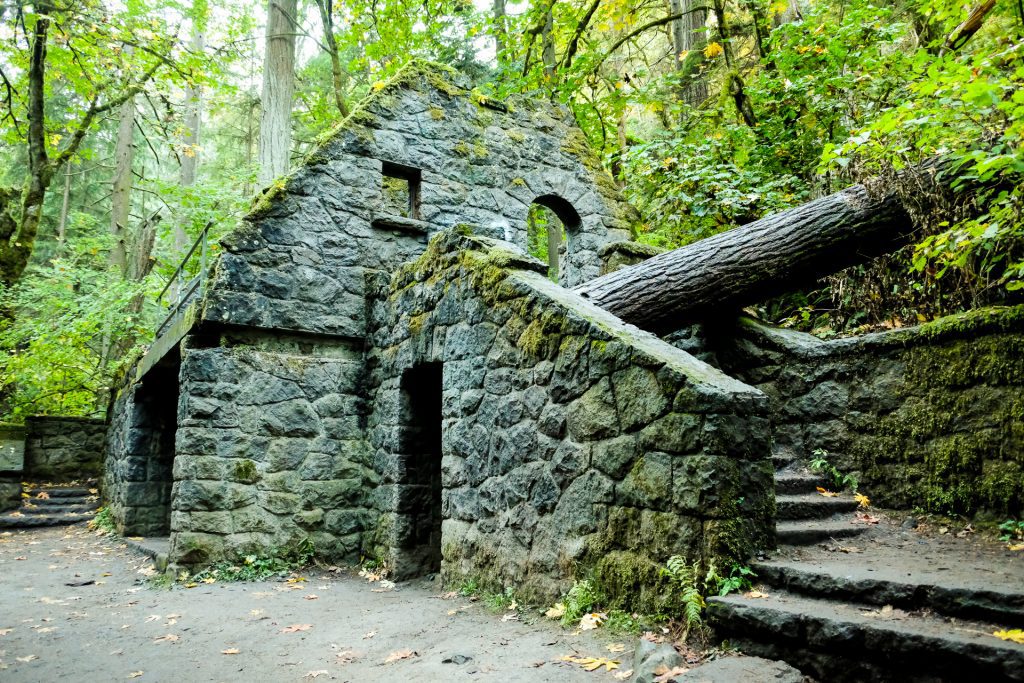 After you’re sufficiently re-caffeinated, take a hike in Forest Park. The drive there is lovely. This 5000-acre park has some 30 miles of hiking and mountain biking trails, but you can also just take a short walk through the woods. We recommend taking the Wildwood Trail to the Stone House for some photo ops. You see plenty in the 15-20 minutes it takes you to get there: streams, little waterfalls, an abundant green canopy and vibrant undergrowth, and probably some birds or other wildlife. It’s not terribly strenuous so you can saunter with relative ease for most of the way. 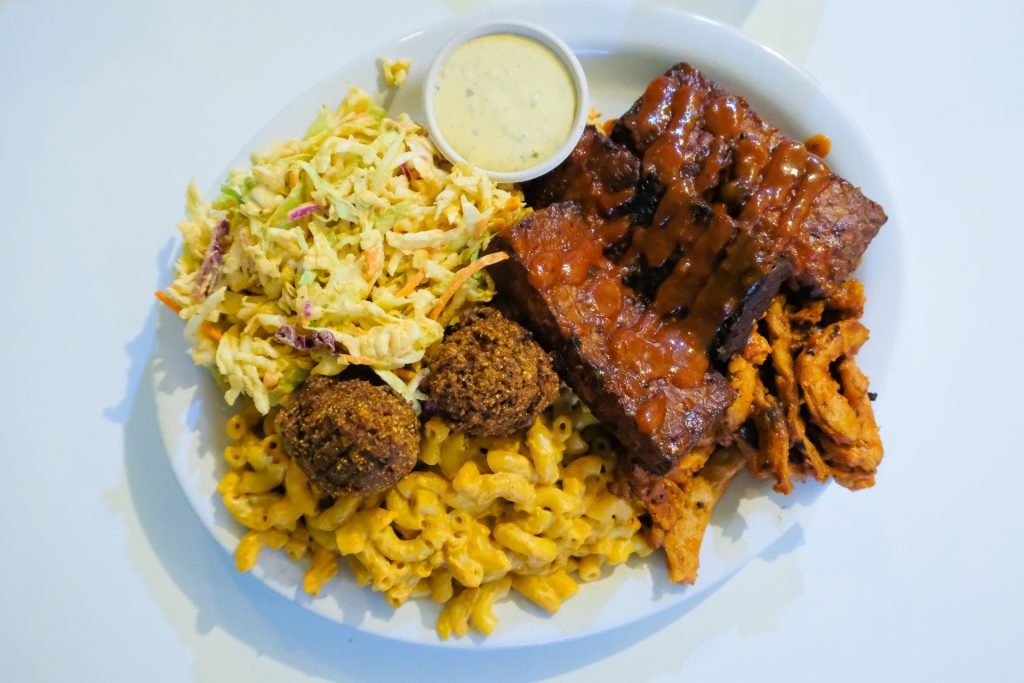 When it’s time for dinner, stuff yourself at Homegrown Smoker, the local vegan BBQ joint. They have so. Much. BBQ. BBQ burritos, mac ‘n’ cheese, chipotle slaw, buffalo wings, smoked soy curls, tempeh ribs, you name it. And it’s all delightful. Definitely one of the top 12 things to do in Portland, or at least one of the top 12 places to eat. Get your protein and sugary sauce fix, son!

Hit up Portland Night Market on Friday and Saturday nights for a little bit of everything Portland. Vegan chocolate? Hand-crafted cat-nip toys? Hand-thrown pottery? Vegan ice cream? Artists? Designers? Woodworkers? Yeah, it’s all there. Plus food trucks, booze, and a whole lot of people. It’s gonna be crowded, so be prepared, but wriggling through the crowds is well worth it for a peek (and a few samples) of all the wares available.

That enough to get you started? Would a map help? It’s all yours. Eat up, ride safe, and Wander on!