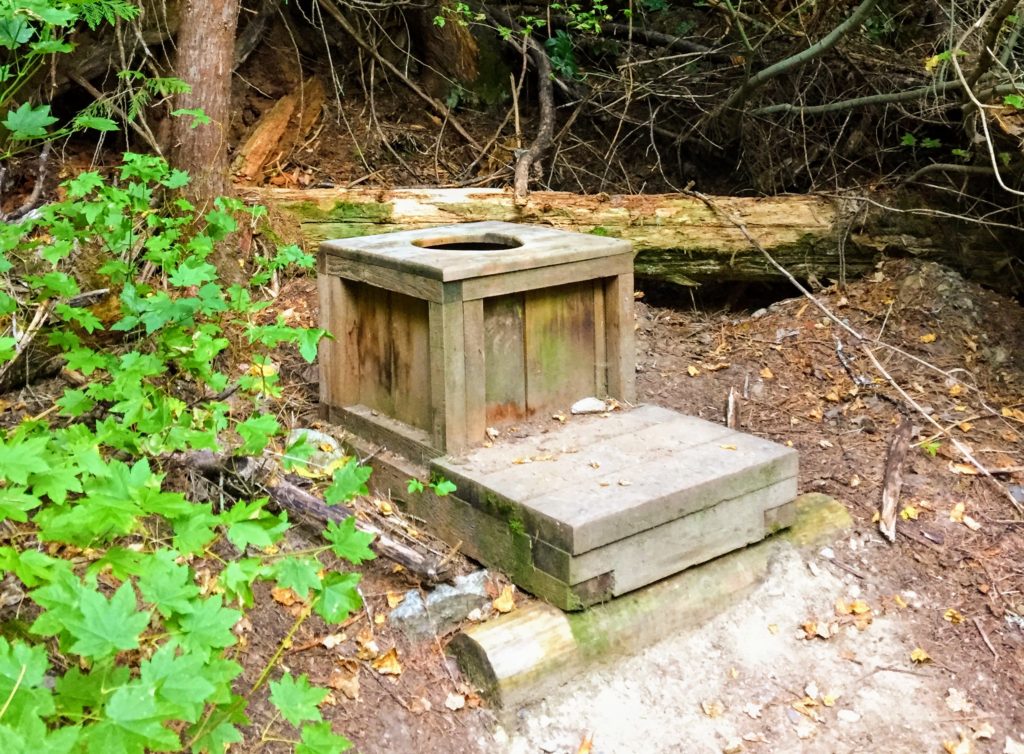 Here at Terradrift, we have an inordinate amount of conversations about going to the bathroom in the woods. You might be surprised at how often it comes up in normal conversation. And we’re rarely the instigators! It’s true, I swear. In fact, just last night we were on a hike with friends and started chatting about the best way to go about the business and all the tools and implements there are now, particularly for the ladies. Cause, yeah, the dudes have it made in this department (freaking anatomy). They don’t even have to find a tree; they can just turn their back and their indecency is camouflaged. Women have to find a large clump of bushes with no visibility on any side there is or might be a trail, fully expose their entire lower half, and then deal with the clean up (sorry, trying not to be too detailed, here). So we’re here to help you learn how to pee in the woods the right way and to share all the things you need in your life to make backcountry bladder relief more…convenient.

We’ve gone to the bathroom in a lot of places that weren’t bathrooms: In the woods, on the side of the road, in a jar in the front seat of our car, in the desert, in sand dunes… We’ve utilized trees, strategically propped car doors, boulders, and the relative privacy of an oversized poncho to protect our modesty. We are not strangers to answering the call of nature while enjoying nature. We’ve even occasionally been known to eschew proper toilets and/or port-o-potties in favor of a quiet spot in the great outdoors.

And yes, we’ve once or twice peed on our shoes or into the wind and had to hurriedly yank shorts back up when another hiker appeared out of nowhere in a sparse wood. But that comes with the territory, so you just have to accept that it’s going to happen, you’re going to be less than comfortable, and that it’s a small price to pay for time spent in the outdoors. So grab your cat hole shovel, make sure you know what poison ivy looks like, and find a tree the size of your modesty. And point yourself downhill and away from your shoes, for crying out loud.

How to Pee in the Woods: Leave No Trace

If you’ve been following us or have spent a significant amount of time outdoors, you’ve heard of Leave No Trace. It’s essentially a series of outdoor ethics detailing how to–you guessed it–leave no trace that you were ever in the great outdoors to begin with. But did you know there’s a whole principle about waste (which involves going to the bathroom)?

And it goes something like this: Don’t go within 200 feet of a water source, campsite or trail, dig a 6-inch hole for solids, and it’s usually OK to bury your toilet paper, but if there’s no way to do so (think riverbeds, rocky or desert terrain), you gotta pack it out.

Because there’s nothing that makes outdoor lovers angrier than a white flag of toilet paper waving in the breeze at the foot of a tree or under a rock or behind some bushes. It’s not that hard! Bury it or pack it out! Or opt for a more natural method like a smooth stone or piece of wood or leaves, for crying out loud. I also know ladies who just wear liners when they hike so they can do the whole drip-dry thing without feeling all soggy and gross.

Sometimes, and I hate to be the one to break this to you, you will also have to pack out your solid (human) waste. Some parks in desert regions and some not in desert regions (like North Cascades National Park), insist you use what essentially amounts to a doggie bag for humans–a thick, opaque plastic bag–to collect your toilet paper and excrement, which you then tie to the outside of your bag like soggy, smelly socks and dispose when you return to civilization. This protects sensitive ecosystems, so if a park says do it, you put on your big kid pants and do it.

However, If it’s just the paper you have to worry about, a zip-top bag will do, though something you can’t see through is highly recommended to reduce the gross-factor for everyone else.

How to Pee in the Woods: The Tools

So now you know how to go about it. I can’t give you a play-by-play on technique–you’re an adult, you should know the best way to squat/lean/hover so you don’t pee on your shoes–but I can share some clever products that might just make peeing in the woods less of a terrifying ordeal.

Or more terrifying, depending on how you look at it.

Which reminds me: If you’re planning on making the wilderness your temporary toilet, you probably shouldn’t be that uncomfortable with dirt and germs and stuff. Yeah, it can get gross out there. Bring some hand sanitizer (please don’t spread giardia to your campmates) and get over it. That said, outdoor bathroom rituals will always be less hygienic than their indoor counterparts. That said… 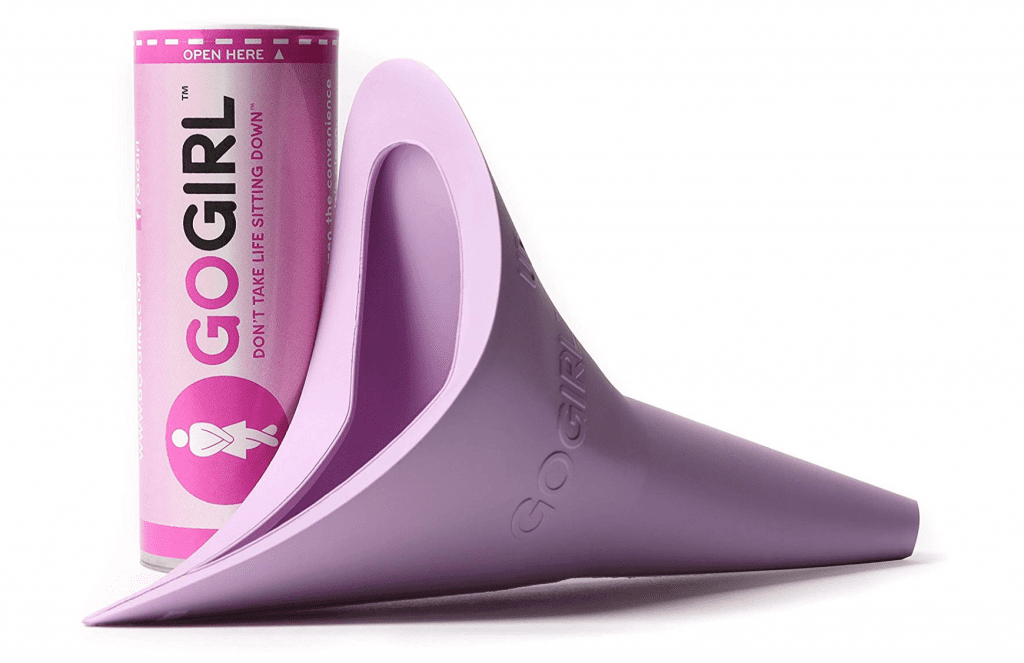 You’ll likely see these contraptions at outdoor stores under brand names like SheWee and Go Girl. They’re funny. You look at them and can’t help but laugh. I’ve never used one personally, but I’ve known people who have (and who pointed out they’re not awesome when you’re drunk but are great for peeing into bottles with small openings).

Basically, they offer the option of peeing standing up, just like the bros. It’s more or less an anatomically-shaped funnel. The biggest pro? You won’t have to drop your drawers to relieve yourself. Yay for not exposing yourself to nearby hikers who should make slightly more noise before rounding blind corners! Order one here. 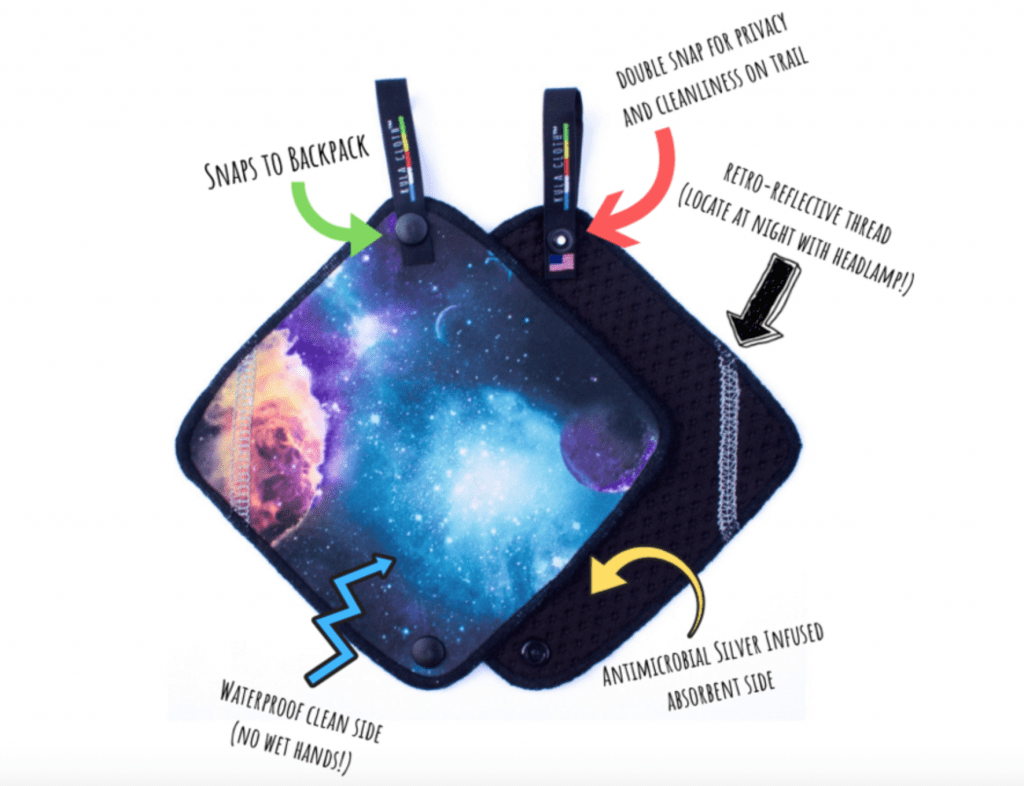 The Kula Cloth is an answer to the toilet paper issue. But only kind of. It’s strictly for liquid waste cleanup (keep it in the “pee-zone,” they say), so you still have to bring along toilet paper for those pesky solids. Unless you’re the kind of person whose bowels shut down when you backpack, in which case, lucky you(?).

The fabric on one side is anti-microbial and silver-infused and is meant to clip onto your pack to dry/sanitize in the sun. Yes, you apparently clip a pee rag to the outside of your bag. But you can rinse it off and fold it in half if you prefer. And the opposite side is waterproof so nothing soaks through. People seem to dig it and it reduces the amount of paper left in the wilderness. Order one from their website here. 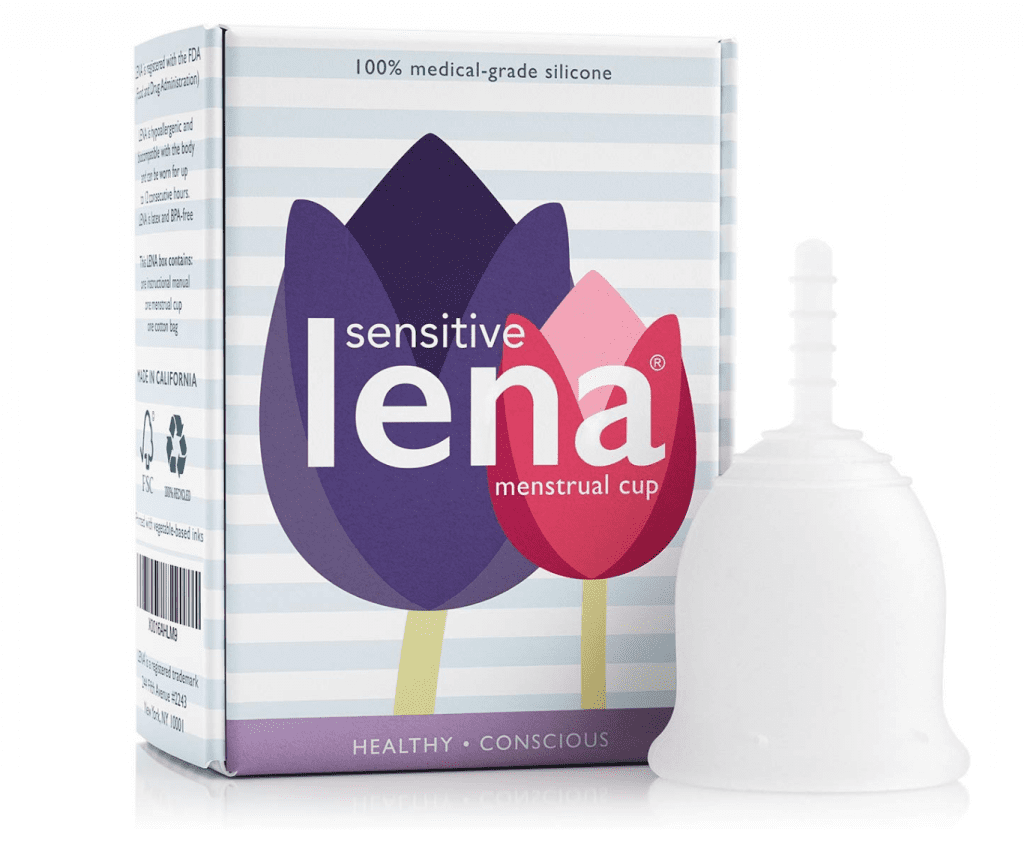 In my opinion, this one you should be using every day (or rather, month), not just when backpacking. It reduces waste and saves tons of money. A lot of people are grossed out by the idea of a menstrual cup, but I honestly have no idea why. They’re your own dang bodily fluids, woman! Get over it already. Also, would you rather get toxic shock syndrome? I didn’t think so.

The Diva Cup and Lena Cup replace other “sanitary” items and catch stuff instead of absorb stuff. And it’s reusable up to ten years since it’s made of silicone. You use it by inserting, carrying on with your life, and removing and dumping when it’s full. Rinse it out if you have the option, then put it right back in. Continue carrying on (no packing out of used items required). And don’t even let me hear you use menstruation as an excuse for not getting outdoors… Order one here.

Why not use all three? Make a care package for an outdoorsy friend. Heck, why not get one for you, too? You can practice peeing standing up together. Or something. Maybe that’s weird. It’s probably weird. But you do you.

*This post contains affiliate links, which mean we earn a small percentage of sales that result when you click on dem links.

Thanks for the article! I have been wanting to try a menstrual cup, but I am overwhelmed by the choices available now. Have you tried many brands? Is the Lena cup the one that you would recommend? I have zero issues peeing in the woods (no funnel required), but if you decided to write a whole article about how to have a monthly cycle in the woods, I would read it because I need a lot of guidance in this department!

Haha! I hear you! I personally use the Diva Cup, but many of the brands are similar with only slight variations in design. So it's really just personal preference!