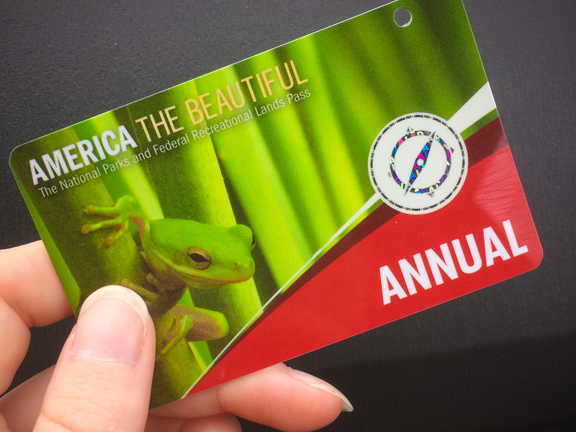 So you’re planning a few visits to some of the United States’ fabulous national parks this year. Great! We’ve got tons of them! Over 2000, to be precise (including federal recreation sites and national monuments). And they are all varying levels of spectacular; it just depends on what you’re looking for. Massive, towering trees? Sequoia National Park’s got that. Red desert vistas? Head to Arches National Park. Tree-covered rolling hills? Smokey Mountain National Park. A giant hole in the ground (and I’m simplifying, here)? Grand Canyon National Park. No matter where you are in the U.S. there are amazing protected places to explore. And an annual national parks pass grants access to just about all of them.

Because park entry fees don’t come cheap. True, there are usually a handful of times each year that entry to the national parks is free, but if you don’t happen to find yourself in the immediate vicinity on one of those exact dates, you’re gonna pay. At most major parks (like Yosemite, Yellowstone or Grand Canyon), that fee is $30 per vehicle or $15 per person if you’re heading in alone. But if you’re planning on hitting up at least three parks in 12 months, the annual national parks pass, also known as the America the Beautiful National Parks and Federal Recreational Lands Annual Pass, is worth it.

The annual parks pass costs $80 and covers the same carload of people (up to four) as the normal entry fee, but instead of paying at the entry booth, you’ll just flash your handy plastic card and go on your merry way. But where does one acquire this handy plastic card? You have a couple of options:

1. Show up at a National Park and fork over the cash

This will usually be your best bet as you’re obviously headed to the park anyway. When you arrive at the entry station, just tell the park ranger you’d like to purchase the annual parks pass and she will get you all set up. You won’t even pay sales tax. Easy peasy.

If you’d rather have the card in advance, say if you’re headed to a park or recreation area where passes aren’t sold (check the list here), then you can order a pass at USGS.gov. It’ll be mailed to you, but in addition to it taking up to three weeks, you’ll also pay a processing fee of $5, so it’s not ideal.

3. At your local REI

Depending on your store, you might be able to show up and buy a parks pass off the rack for the same $80. If it’s not in stock at your store, you can order it on rei.com where shipping is free, but you can also have it mailed to the store nearest you (or nearest the park you want to visit). If you still have an REI gift card left over from Christmas you’re set.

Fun fact: Passes are free for U.S. Military, National Park volunteers, anyone with a disability and U.S. fourth graders. You just have to show some proof that you belong in one of those categories. And if you’re over 62, an annual park pass for seniors is only $20 or you can splurge for a lifetime pass for $80.

Each pass covers entrance fees at national parks and national wildlife refuges as well as standard amenity fees (day use fees) at national forests and grasslands, and at lands managed by the Bureau of Land Management, Bureau of Reclamation and U.S. Army Corps of Engineers.

So get yourself a pass and start exploring! Wander on!