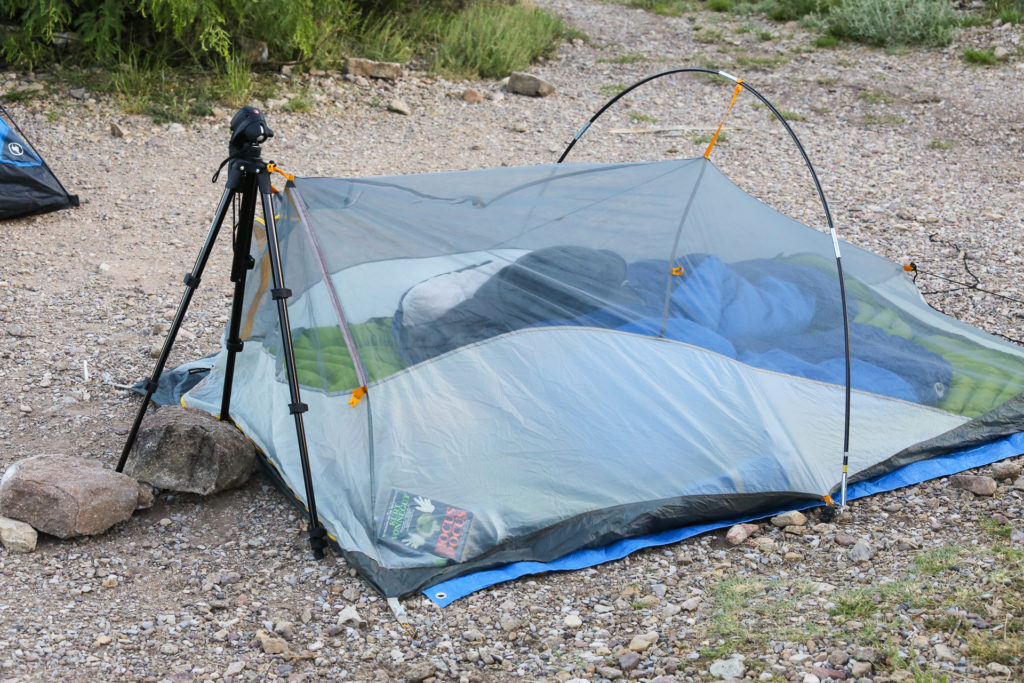 Most of the time when we set out to enjoy the outdoors, we are fully and 100% prepared. Sure, there are those times when we’ve forgotten trekking poles or didn’t remember the salt, but we almost always have everything we need to enjoy a successful backpacking or camping trip. However, there are times when you just forget something or didn’t double-check that your spork was in the stuff sack or a tent springs a leak while you’re on the trail. But don’t let damaged or forgotten gear ruin your trip – get creative!

We had to get fairly creative on several recent trips. You might have read about our encounter with crazy winds in Caprock Canyons State Park in Texas (and why to always carry tape), but more recently, we went camping in Big Bend National Park (again). Personally, I’d like to blame it on the fact that we were car camping and not backpacking. There’s this brain thing where if our survival doesn’t hinge on what’s in our packs we tend to ease up on our rigorous planning. We’re just car-camping! This is a cinch! That, and we had to put off packing until the night before we left for the group trip, so there was that.

Long story short, we forgot a lot of things. Among them: trekking poles (which we didn’t really need on the hikes we went on anyway), a black light for scorpion spotting, condiments, full fuel canisters (fortunately someone else brought one so when we ran out cooking for the group there was a backup), and our tent poles. Yes, our tent poles.

Honestly, in the desert in the spring, this, fortunately, would never have been that big an issue. It wasn’t supposed to rain, we had our footprint/tarp and our sleep pads, and we could definitely have slept sans tent under the stars. We probably would have opted for the metal picnic tables as a sleeping surface instead of the ground due to the scorpions running around, but all the same.

Our first plan of action was simply to share a family-size tent with another duo in the group, but as it turned out, their tent couldn’t take the wind that first night and basically shredded at all of the stake points (also at least one pole snapped). So that was out. They opted to sleep in their car for two nights, but I was determined to make it work.

Josh was ready to call it a night and roll out our sleeping bags in the other car, but I wouldn’t have it. I rifled around in the trunk to see what I could find and pulled out a camera tripod, some paracord, and one of the broken poles form the late great family-size tent.

Here’s what we did: We staked out the corners of the tent, then I tied the front top corner of to the top of the tripod with the paracord and weighted down the tripod feet with rocks from around the campsite (don’t worry, we put them back as per Leave No Trace). We then utilized half of one broken tent pole from the family tent and jerry-rigged it with a few other broken off parts and tent stakes to raise the middle portion of our tent. That part wasn’t entirely necessary but it helped create the illusion of space. And just like that, we had a tent, sans poles. It was a little tricky to crawl in and out of with the tripod in the way, but hey, it was a standing tend, so I call that a win!

Side note: I will never second-guess the ability of our Big Agnes Fly Creek tent to handle whatever we (or nature) throw at it!

Take Pride in Your Creative Solutions

Fixing a fly to the tent might have been a smidge difficult, but the weather was perfect for sleeping, there were no rain clouds in the forecast, and, as our state song goes, the stars at night were big and bright. Personally, I was pretty dang proud of myself for this solution and am pretty sure we redeemed ourselves in the eyes of our compatriots, all of whom are much less experienced than we are when it comes to camping (but probably wondered a bit about our sanity when we announced we had forgotten an essential piece of equipment).

Needless to say, if you find yourself one item short (or two, or three) when you start unpacking at camp, don’t panic! (Which is also what The Hitchhiker’s Guide to the Galaxy has printed in large friendly letters on its cover). Take stock, get creative, and make it work! Don’t let damaged or forgotten gear ruin your trip.

Ever had to come up with a creative solution where damaged or forgotten gear is concerned? Do tell! We love a good #fail story! Wander on!