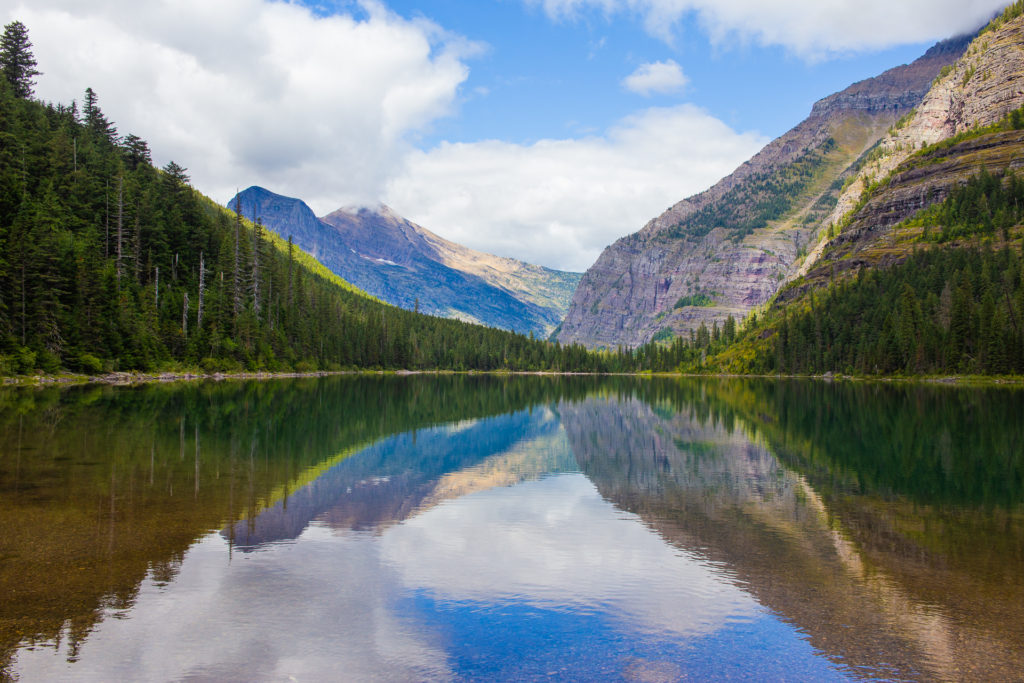 Montana. Ima be honest: it’s not always the most thrilling state to drive through (though it probably beats Texas). Like many other western states, there’s often a whole lot of nothingness in between points of interest or cities like Bozeman and Missoula. Until you get to Glacier National Park, that is. Which, surprisingly, we’d never been to. But this gem of a park was high on the list of reasons we decided to drive to Alaska instead of fly and it was high time we scheduled a few days to go hiking in Glacier National Park.

After spending a few days over the weekend in Missoula, Montana, we headed north again. I know, I know, that’s the wrong direction! We should have hit up Glacier on the way to Alaska, not on the way back, but you know what? When you’re on a 12,000-mile road trip, what’s another 100 miles in the opposte direction? Plus, as you may have already read in last week’s post, Missoula is a great jumping-off point for some adventure in Glacier National Park.

We perused gear shops, stocked up on ramen and stove fuel, and washed all of our backpacking clothes at the laundromat. We were ready for some backpacking.

We did not go backpacking.

Which was only slightly disappointing. 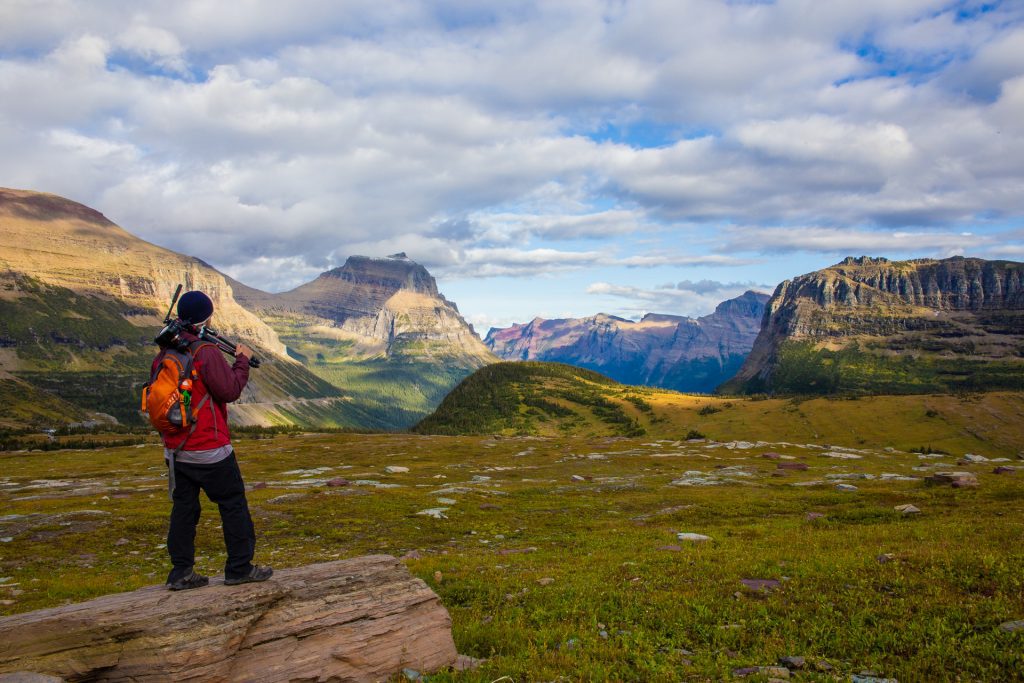 Here’s how it went down: We arrived at Glacier in the afternoon, which, turns out, is too late if you’re hoping to have your choice of backcountry permits, which are required. Every single trail we were stoked to explore was reserved for at least two nights. The one that wasn’t got snatched up while we were deliberating. Our bad. So no backpacking. Guess it would be day hikes and campgrounds for us. Little did we know that in the middle of September the park would still be this busy.

*Side note: we weren’t the only ones surprised by this fact. We asked a ranger when it started to slow down. His response? A week ago. At least, that’s when it normally started to settle. But this year had been super busy and people were still flocking to it in droves. Droves! It was insane! And it wasn’t even a weekend! Backcountry permits were all but totally booked, entire sections of the park had to be closed down to traffic by mid morning, and first-come first-served campgrounds were filled by 9:30 in the morning. Crazy! And the trails weren’t much better. After coming off a backpacking adventure in North Cascades National Park where we saw no one for three days (utter bliss), sharing the trail with 1,000 of our closest friends felt positively oppressive.

But! Some of that actually worked in our favor. 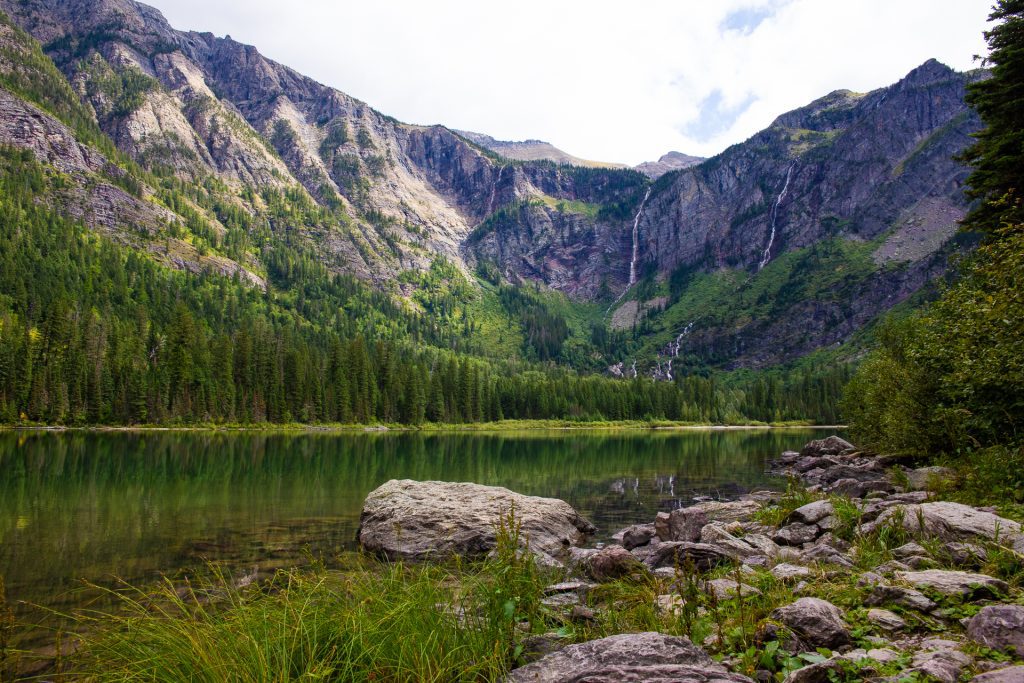 Our very first hike to Avalanche Lake (where I shamefully lost a pair of sunglasses when bending over a ledge) was lovely, but we also struck up a conversation with a couple of fellow hikers who were obviously also photographers and about our age. We started chatting and discovered we had quite a bit in common: they were travelers, we were travelers, they had recently lived in Austalia, we had lived in Australia, she was from Slovakia, we had been to Slovakia, they were living in a van on a months-long road trip, we were living in a Prius on a months-long road trip. It was meant to be.

We hit it off immediately and swapped Insta handles and what not before parting ways. I left with a smile on my face and warm fuzzies. If you know me, you know one of my favorite things about travel is the community you find among other travelers. We’re all just wandering the world together and when you find someone from a different place or culture doing much the same as you, it’s like you’re connected somehow. And I love feeling connected to people.

But we each went on our way. We drove the remainder of Going to the Sun Road with a stop off at Hidden Lake to hike the broad path and sit and marvel at the view from the top of the hill. Freaking spectacular. I mean, just look at it: 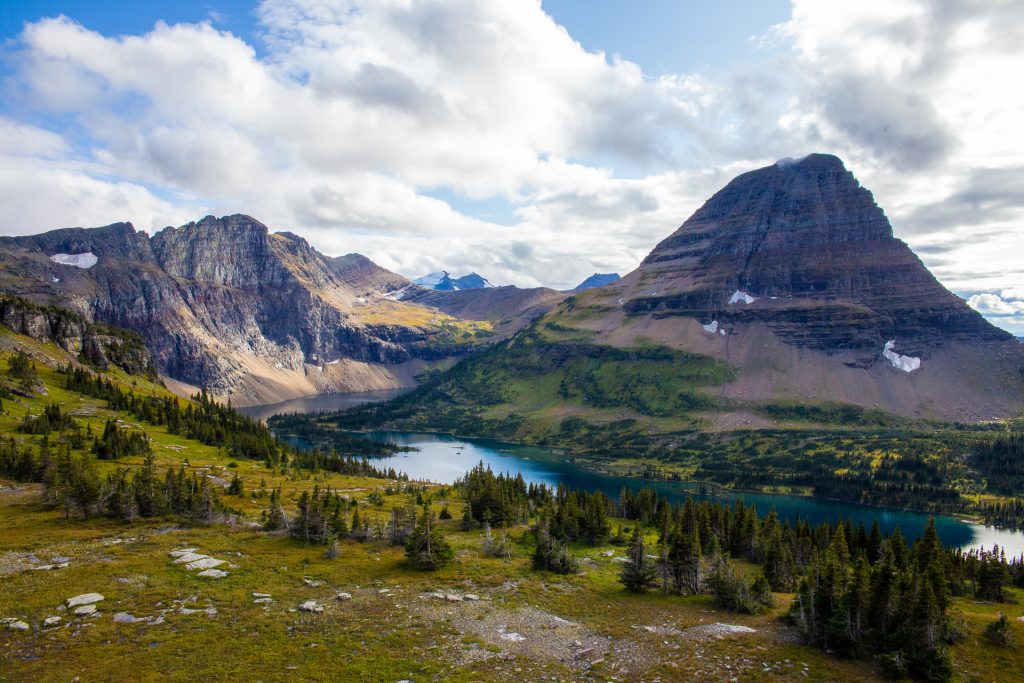 But as it was too late in the evening to even hope to find an open spot at even the less popular campgrounds in the park, we exited the park’s eastern gate and headed to a nearby campground where we paid too much ($20) for a site with no water and just a porta potty. But when we pulled up, low and behold, there were our friends from the hike in the site next to ours!

For real! My heart did a happy little backflip. We chatted some more and talked about what our plans for the next day were. They said they were getting up early to go nab a spot at the Many Glacier Campground where we were also planning to hike but had no hope of being lucky enough to claim a site. We joked that maybe we’d just show up the next evening and share their spot with them, and they laughed and said that would be great. They may or may not have been aware that we were entirely serious.

They were off by the time we crawled out of our tent the next morning, but we booked it to the Many Glacier entrance, too. There was limited parking in that area and we wanted to make sure we got in before the masses descended. Then we opted for a realatively easy hike to Grinnell Lake where we were rewarded with not only a less populated trail, but moose. So. Many. Moose. (The plural of which I like to think should be mooses. Because it’s more fun to say. Obviously.) 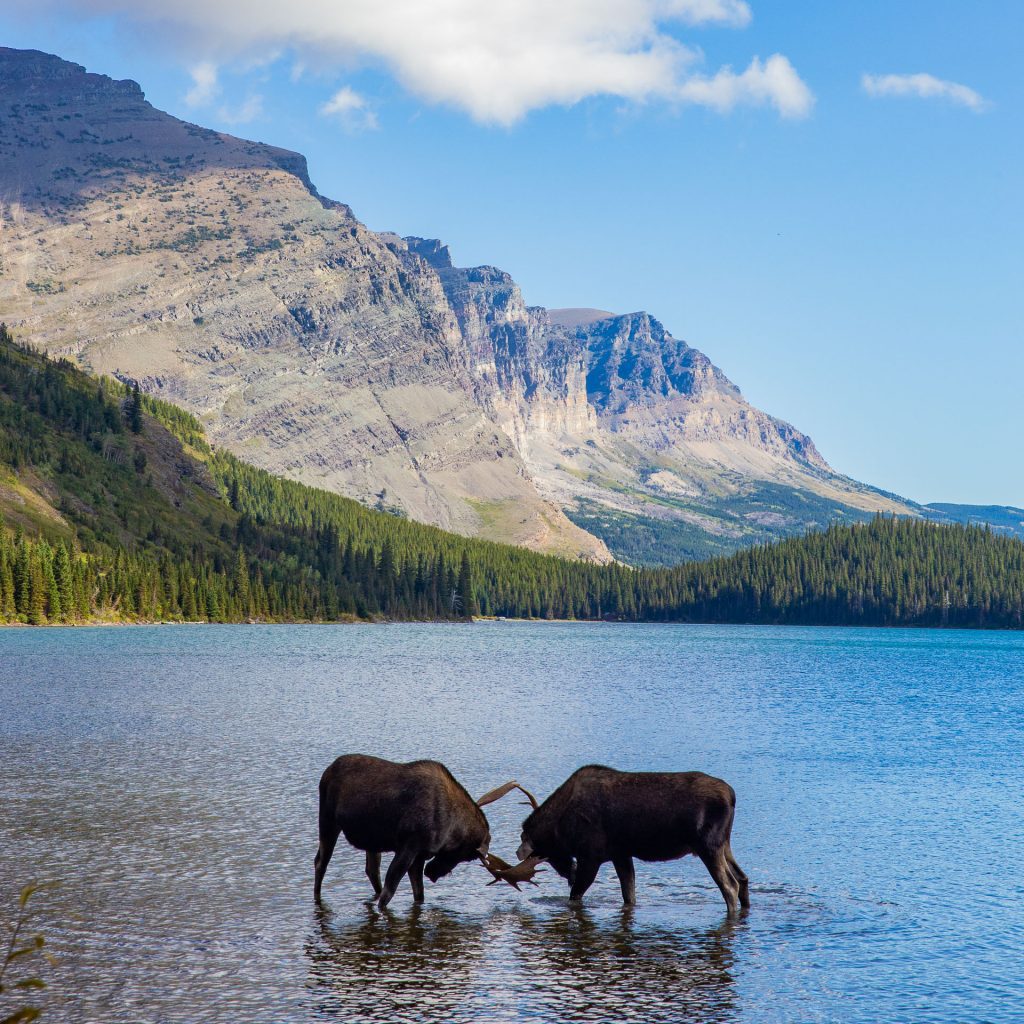 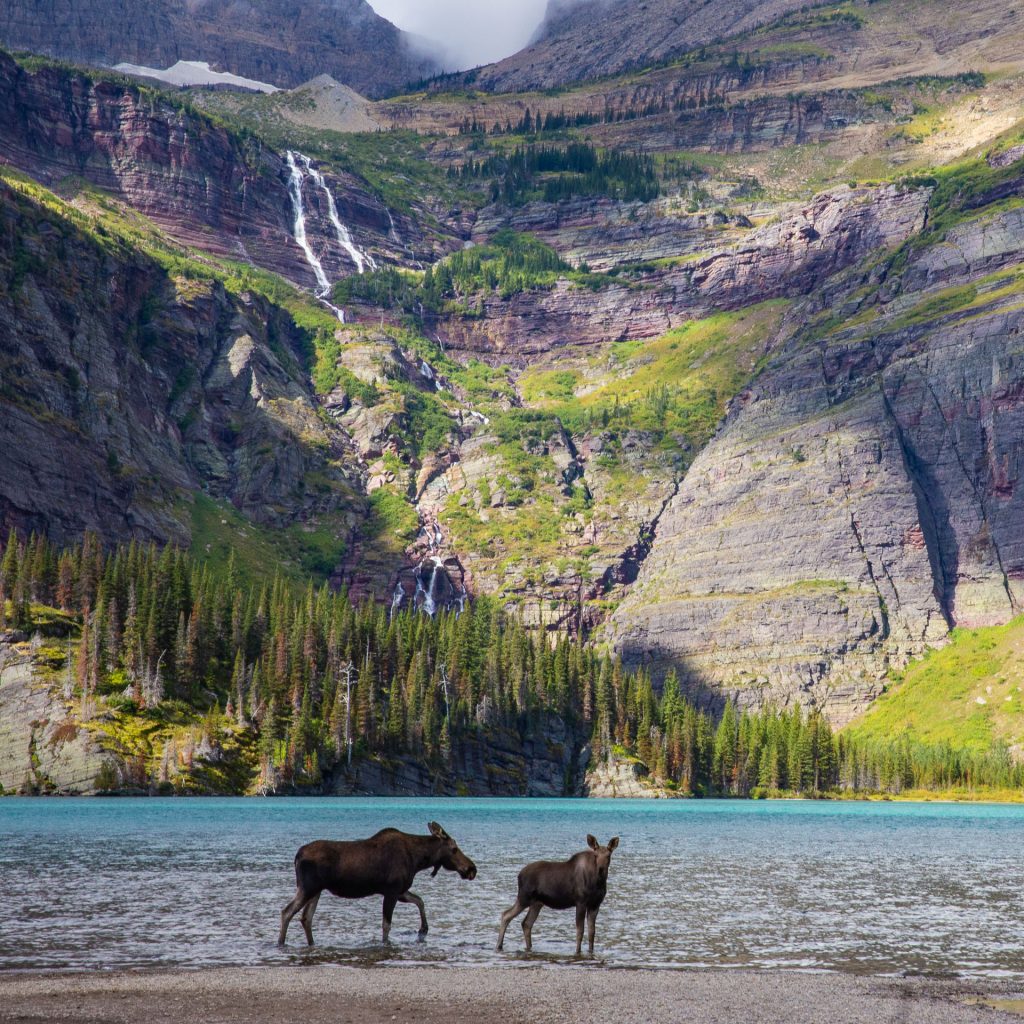 First it was two bull moose battling it out in Lake Josephine. I say battling, but it was more of a half-hearted clanging of antlers. It lasted for a few minutes and when they slowly drifted apart, the small group of us who had hidden in nearby bushes to watch dispersed, too. Then, while sitting on the edge of Grinnell Lake enjoying the view with maybe 4 other hikers, a mama moose and her baby moose (again, two mooses) wandered out of the trees and in front of all of us, promting a hasty relocation on Josh’s and my part, who were directly in their route and much too close at 20 feet or so. But how cool is that? 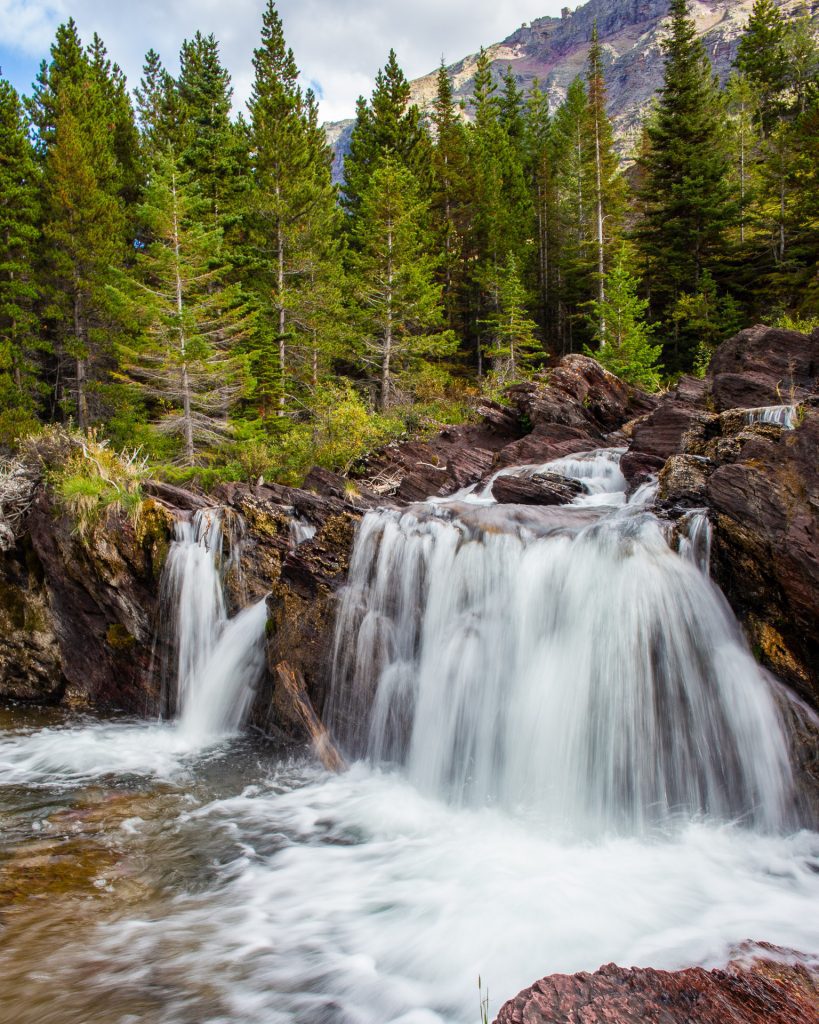 After another short hike to Redrock falls, we had a wander through the campground to see if our new friends had indeed claimed a campsite. They sure had! We were all smiles as they invited us to pitch our tent on their site–they weren’t using it after all–they had a mattress in that van! In exchange, we supplied the overpriced firewood, cookies, conversation, and a bag of  non-vegan huckleberry popcorn and honey that we had been gifted earlier that week. This, friends, is why I never throw anything out, even if I’m not going to use it. You never know when you can brighten someone’s day with the gift of nosh.

It was a spectacular night swapping stories and laughing around the fire after dinner. And in the morning, we reluctantly parted ways, the two of us not remotely bummed we didn’t end up backpacking–we had made a human connection in the great outdoors instead, and one that made our travels in the park extra special and memorable.

But we had one more hike we wanted to do: a tough one to Grinnell Glacier. The weather wasn’t looking stellar, but we had heard tales of grizzly bear sightings along the trail the last few days and we wanted more than anything to see one in the wild.

Spoiler alert: we did not.

Freakin’ A. We backpacked all across the Pacific Northwest, Canada and Alaska over two months and we would go home with zero grizzly sightings under our belts. Black bears, mountain goats, moose, bobcats, dall sheep, elk, antelope and ground squirrels, but no grizzlies. Womp. Womp. 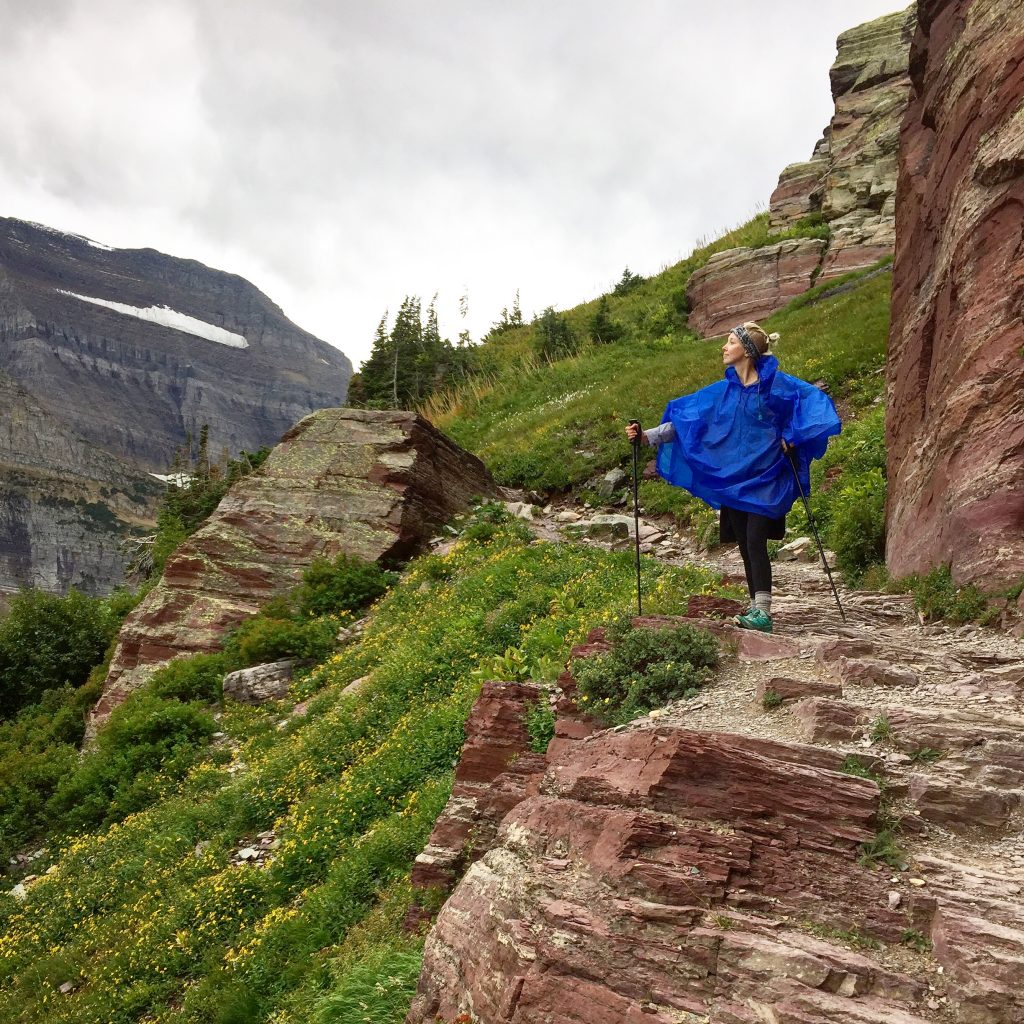 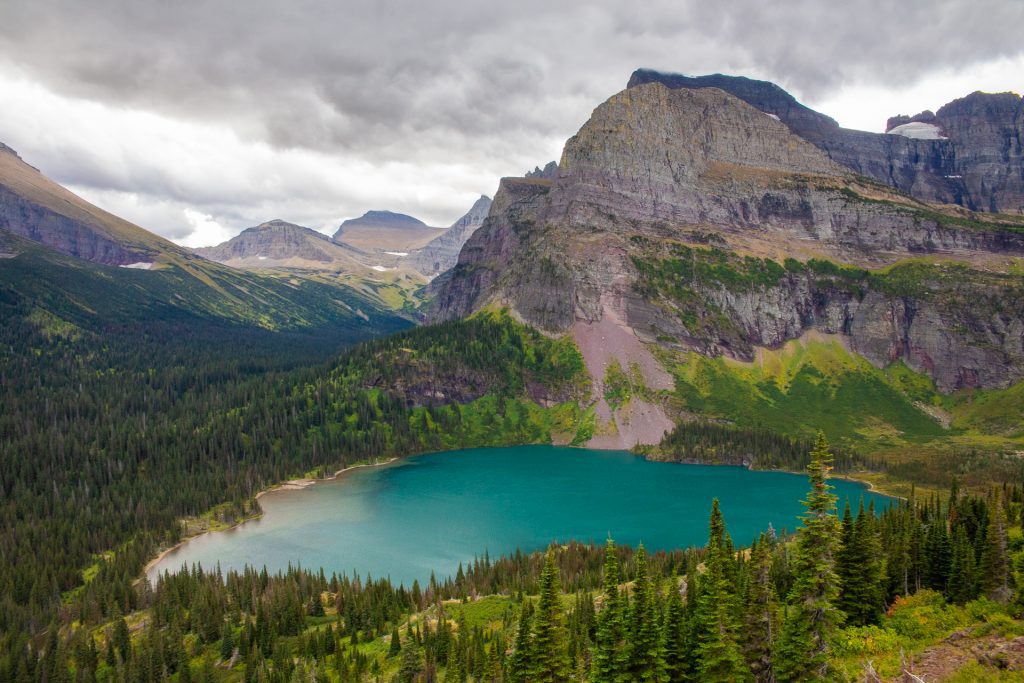 The view from Grinnell Glacier Trail

And the weather was indeed atrocious, but we made the best of it and ended up with some super moody shots of the glacier, trail, and lookouts, and since I opted for a humongous and ridiculous poncho, I also stayed nice and dry (though it did not help keep my hands and feet warm by the icy glacier). So I only complained a little.

Over all, yeah, hiking in Glacier National Park was a win. But you better believe that next time we’re gettin’ that backcountry permit. I’ve got alpine lakes to hike to, son!

Where are your favorite places to go hiking in Glacier National Park? Any tips on avoiding the crowds? Share ’em! Wander on!