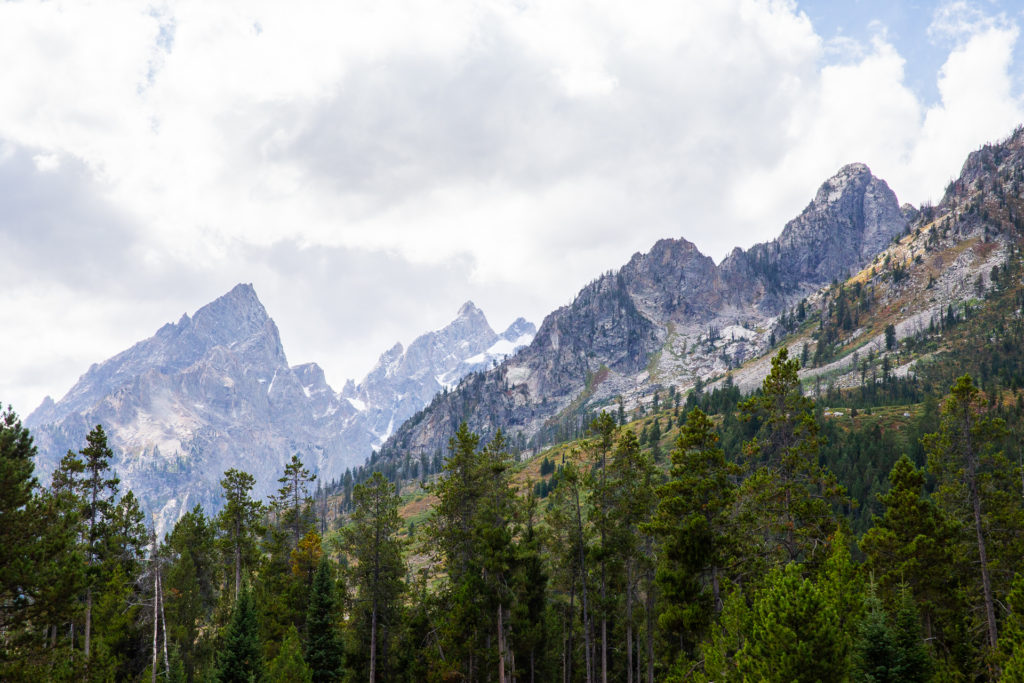 On this wild and crazy road trip from Austin to Alaska, we’ve hit up our fair share of national parks, ensuring that annual parks pass we bought was worth it. But after we left Missoula, there were two more we hit up right away: Grand Teton National Park and Colorado National Monument outside of Grand Junction, Colorado.

Why not Yellowstone? you ask? Well, short answer: I’ve been about three times now and I didn’t want to deal with the crowds at this exceedingly driveable park. Also, it’s a personal failing of mine that I know nothing of any sort of hiking in the park, which is what we would prefer to driving between attractions, so we skipped it. Sue me. 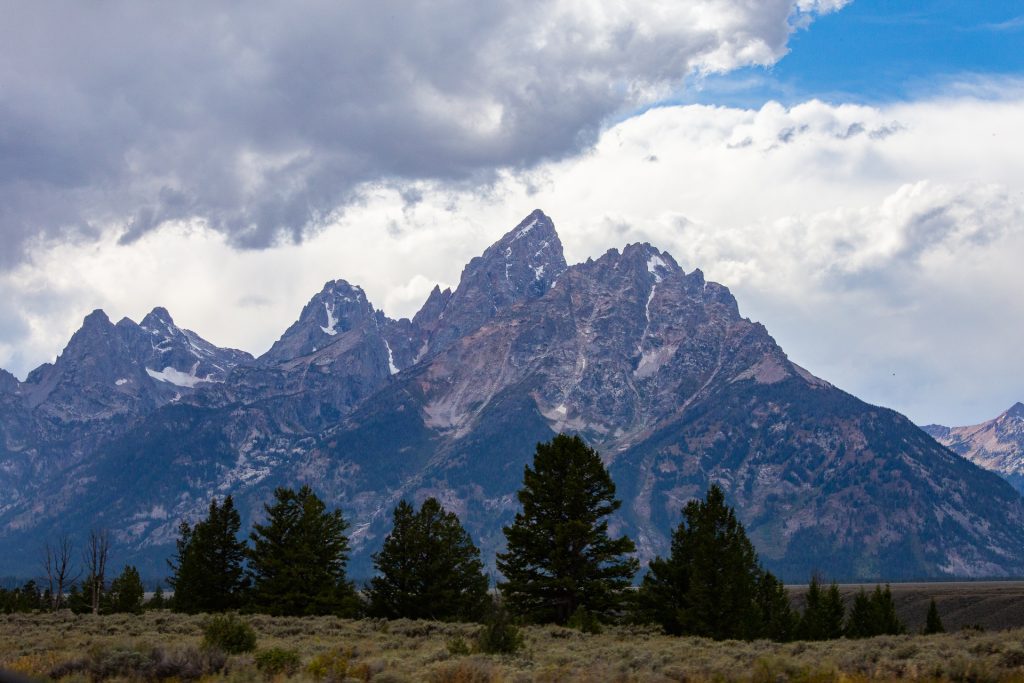 Teton has mountains. And we like mountains. And after spending too little time in the park last fall (one whole day, woopee), we vowed to go back and do some backpacking. So we went to Teton.

Spoiler alert: we still didn’t spend enough time in Grand Teton National Park, so we still have to go back.

We really wanted to summit somthing, but, much to my father’s delight–as he would love nothing more than to return to the park with us so he could summit a second time–we did not. We looked at the calendar, at when we were supposed to be in Denver to meet up with friends, and decided it would be nicer to stop in Grand Junction to visit a cousin we hadn’t seen in, like, a decade, instead of rushing to scramble up a mountain and probably not enjoy it.

Also, now I can summit with my dad (eh, mom will probably want to come, too) and see if I can make him cry at the peak. #LifeGoals

But because Grand Teton National Park is nearly as popular as Yellowstone, it was also packed. Which meant our backcountry campsite options were limited. Are you sensing a trend here (you are if you’ve read about backpacking in Glacier and Banff)? So we took a site at Trapper Lake for one nighht, mostly because a.) it’s a single campsite at the end of a trail which means no company, and b.) the trail out there was flat. And we were tired. Don’t judge us. 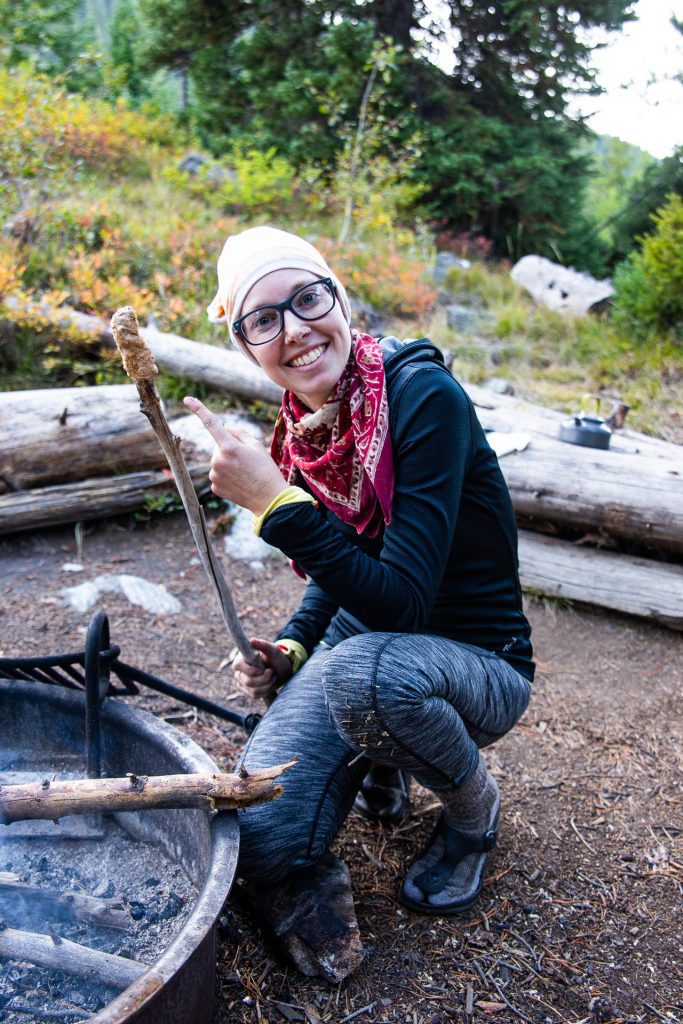 Turns out, Trapper Lake isn’t the most picturesque body of water in the park, but we had it all to ourselves. So we strung up the hammock, packed in some ingredients to make campfire bread, and absolutely enjoyed every minute of nature time.

So did the handful of deer that unabashedly meandered into our campsite at dusk and dawn and nearly gave Josh a heart attack when they decided snorting up a storm and feasting right next to his side of the tent was a splendid idea. If you’ve never woken to strange animal sounds right outside your tent fly, you’ve no idea how long and traumatizing the first few seconds spent trying to decide what animal is making them can be.

But we survived the deer encounters and took our sweet time hiking out the next morning. Totally worth the $35 backcountry permit fee. 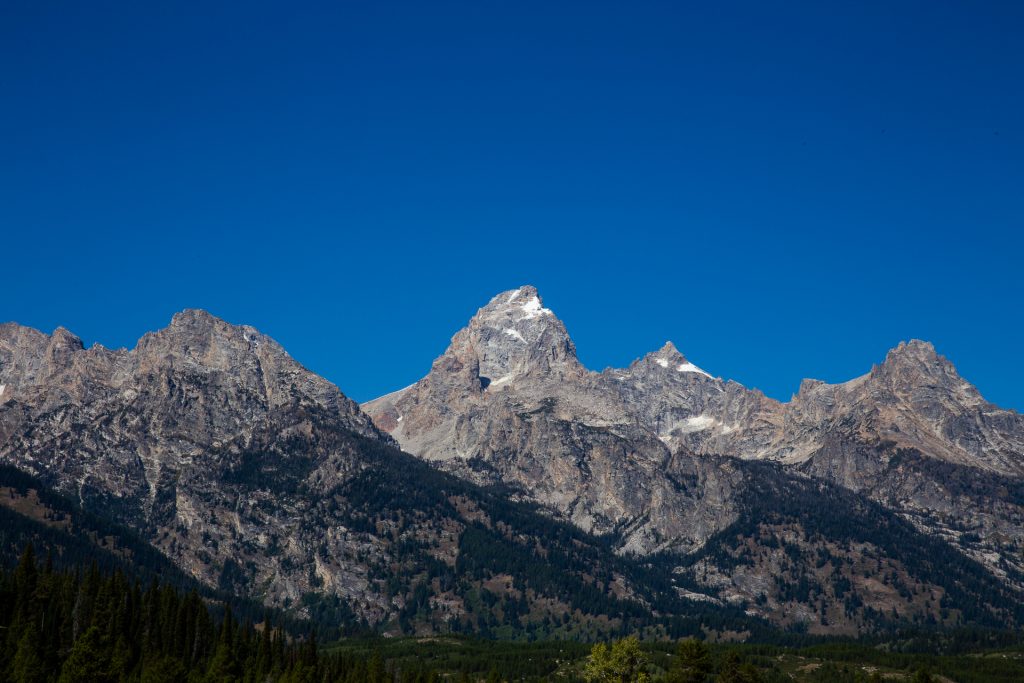 Then we headed on to Grand Junction where we were very pleased to see my cousin, his shower, and his washer and dryer. Very pleased, indeed. As were our sleeping bags, which I’m not sure we’ve ever washed and needed some serious re-fluffing of the synthetic loft. Also they were kinda starting to smell like dirty backpacker. Also, my cuz works at Kiln Coffee Bar, which means we were appropriately caffeinated every day of our visit. That’s a win.

While in town we were very lame and emphasized catching up on work and hanging with family (and family’s roommates) instead of seeing the sights, but we did manage to hit up pretty much every outdor store in town (we have a problem, I know) and find the most awesome Goodwill. Outdoorsy towns have the best Goodwills.

And we ate some vegan food, too, naturally. But not much. Because Grand Junction doesn’t have much. Copeka Coffee was the only all-veg establishment, so we treated ourselves to a sugary snack or two, but otherwise, it was cooking in a proper kitchen for us, which, I’m not gonna lie, is delightful when you’ve been eating ramen and freeze-dried vegetables for weeks.

Boring work stuff aside, after bidding farewell to family (and family’s roommates), we drove toward Colorado National Monument before leaving town. It’s normally $20 for entry per vehicle, but because National Monuments are part of the National Parks system and we had that parks pass, it didn’t cost a thing. 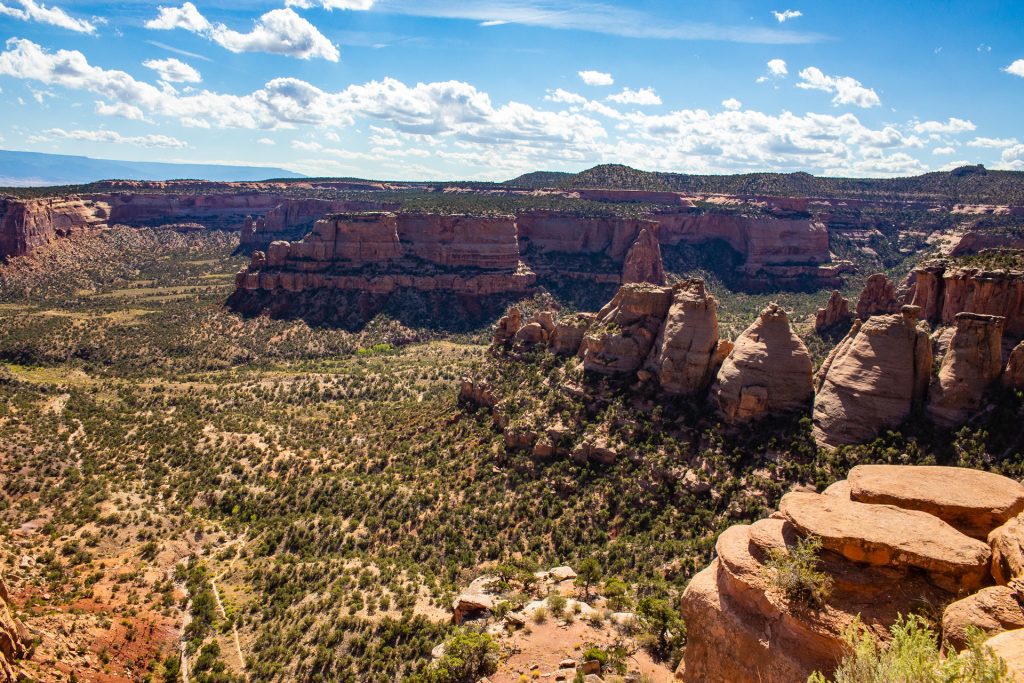 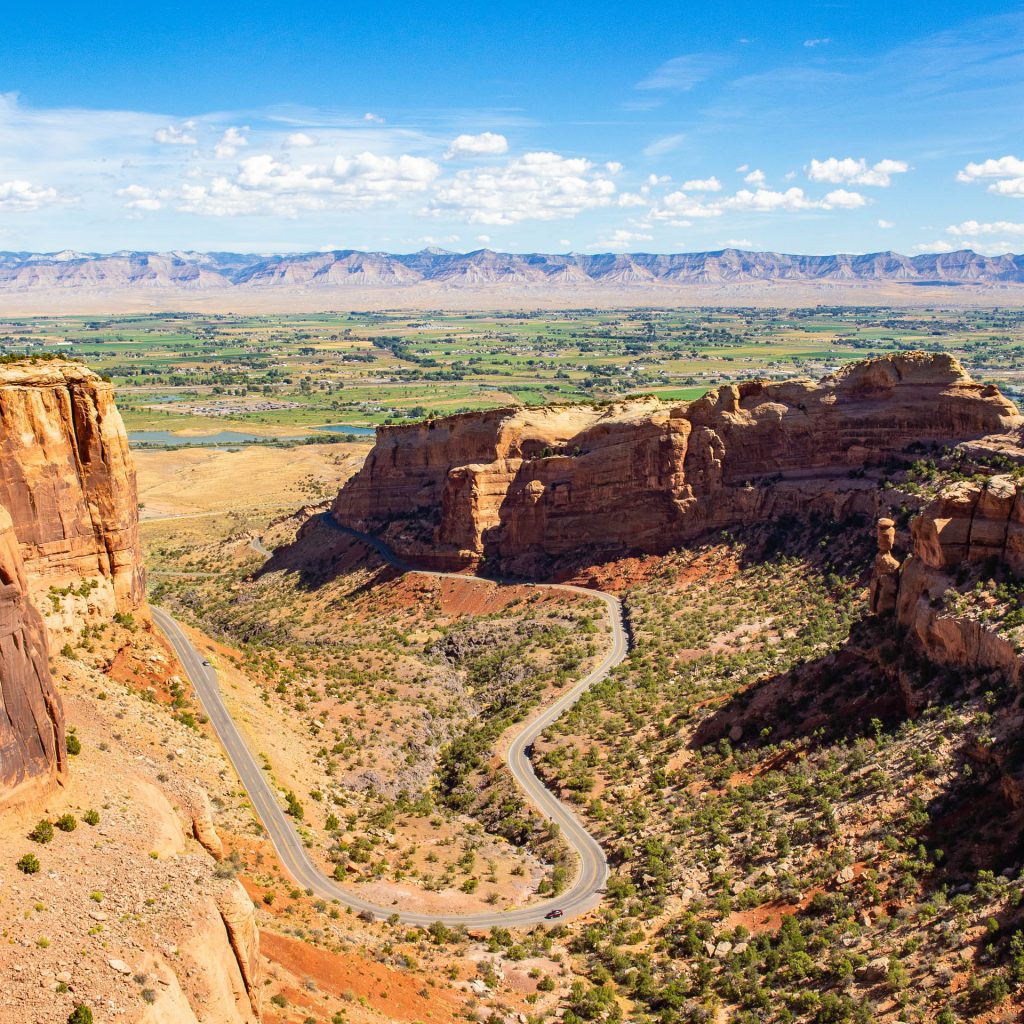 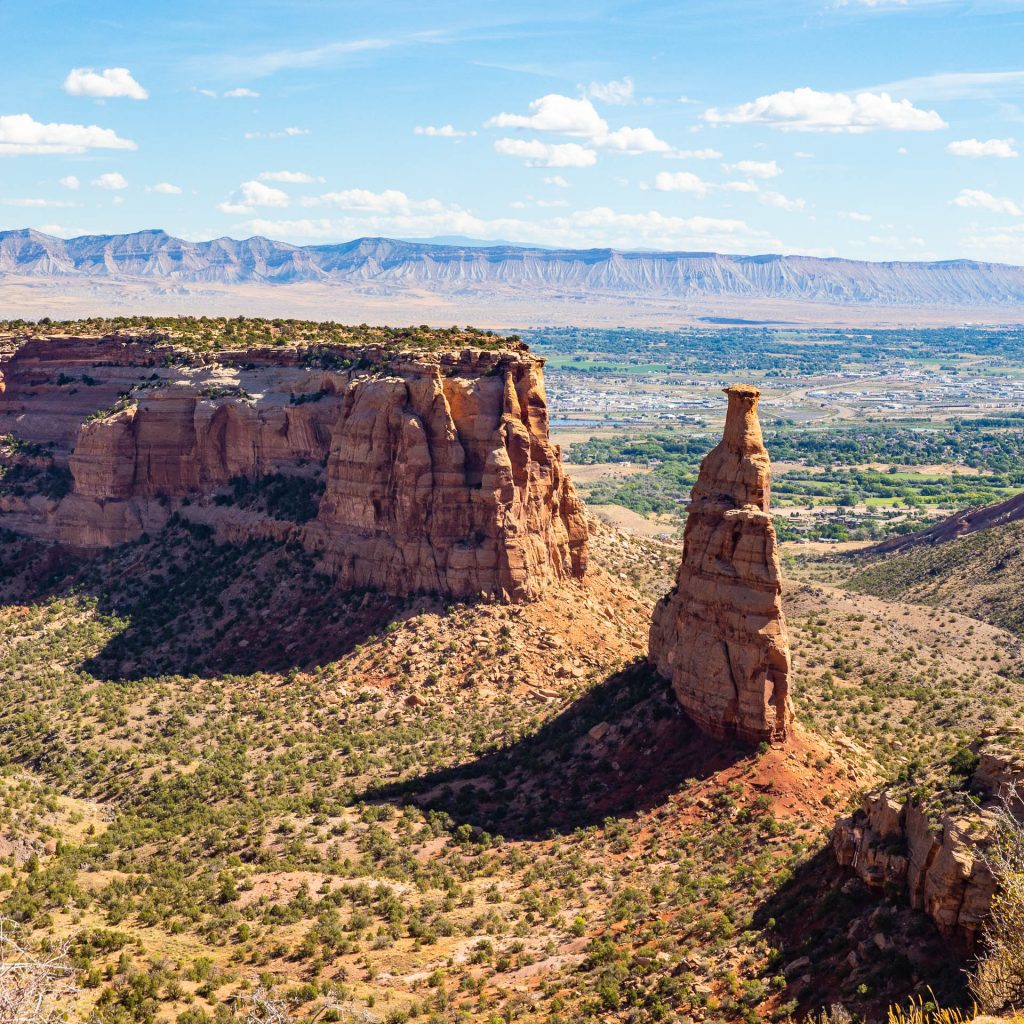 There are a few decent hikes in there, and you can even camp in the canyon, but we just drove the length of Rim Rock Drive, got out a lot to take photos, and just enjoyed the scenery. Grand Junction is high desert and frequently looks more like Utah than how most people picture Colorado, but red desert can be just as alluring as blue mountains.

After a few hours of shielding our eyes from the sun and sand that the wind was whipping everywhere, we continued East to Denver where we would connect with friends for a few days before doing who knows what between Denver and Yosemite. But that’s a post for next week.

What’s your favorite? Mountains or deserts? Wander on!